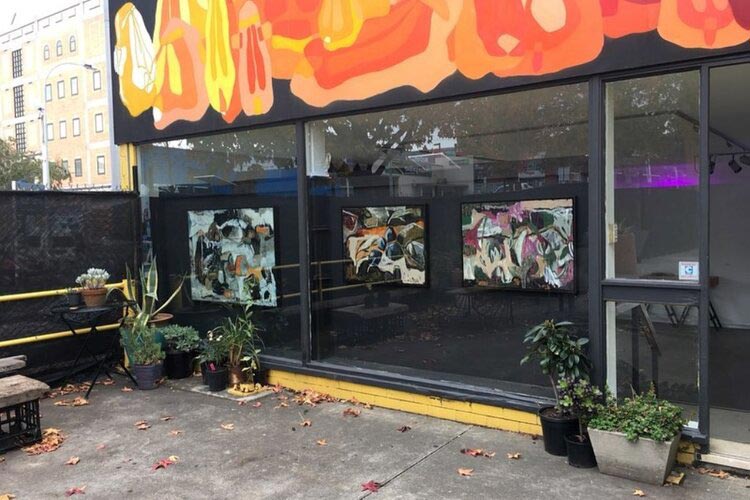 Those passing by the big yellow and blue building at 62 Argyle Street may have seen some changes of late. Big green men and colourful murals have started to creep over its walls and eye catching art pieces are appearing in the windows.

These changes mark the venue’s transformation from a derelict Good Year automotive warehouse into Good Grief Studios – an independent artist-run space for artistic development and experimental creation, which functions as a gallery space and workshop.

Inside, the space houses a gallery, an outdoor courtyard and a small store filled with clothes, accessories, arts and crafts, all handmade by local Tasmanian artisans. And if you can finagle your way behind the scenes you would find the cavernous garage is now a shanty town of artist spaces where some of the brightest up-and-comers on the Tasmanian art scene have the space and resources to create works as large, complex, and experimental as their imaginations can conceive of.

Many of the artists involved in leading this venture come from Television Haus, an art studio that operated in Melville Street for almost 10 years. When the block was bought out by the University of Tasmania for its intercity developments they managed to broker a deal and received the stewardship of another piece of University owned property. The building is scheduled for demolition some time in the next five years and the space will then be filled with further installation for the University’s City Campus expansion. However in the meantime it has been granted a brief but beautiful new life as the home of Good Grief Studios.

The new space has inspired them to increase their scale and their vision. “It’s very exciting to start something new” says Caitlin Fargher, a member of the board of independent artists who organise the day-to-day running of the Studios. “We want to fill a gap that we see in the Tasmanian art scene. Most galleries in Hobart are commercial for established artists or government run – all of which are great! But we want to be a space for the contemporary practices that might not fit into certain boxes. We’re independent, out there and fun, but we’re also a professional space that’s accessible.”

Applications are open now for an artist residency and 2019 exhibitions. Anyone can apply stresses Fargher. “Get involved if you have new ideas or if you just want to paint a mural. We’re hoping to have a really diverse range of shows. Being in the city makes us really accessible as a space,” says Fargher, “We want to create an environment where everyone – from grandmas to toddlers – can all hang out, enjoy some art and feel welcome.”

The studio’s first show opened in April and was a showcase of their current stable of studio artists. Updates about their upcoming shows and projects can be found @goodgriefstudios on Facebook and Instagram. ■