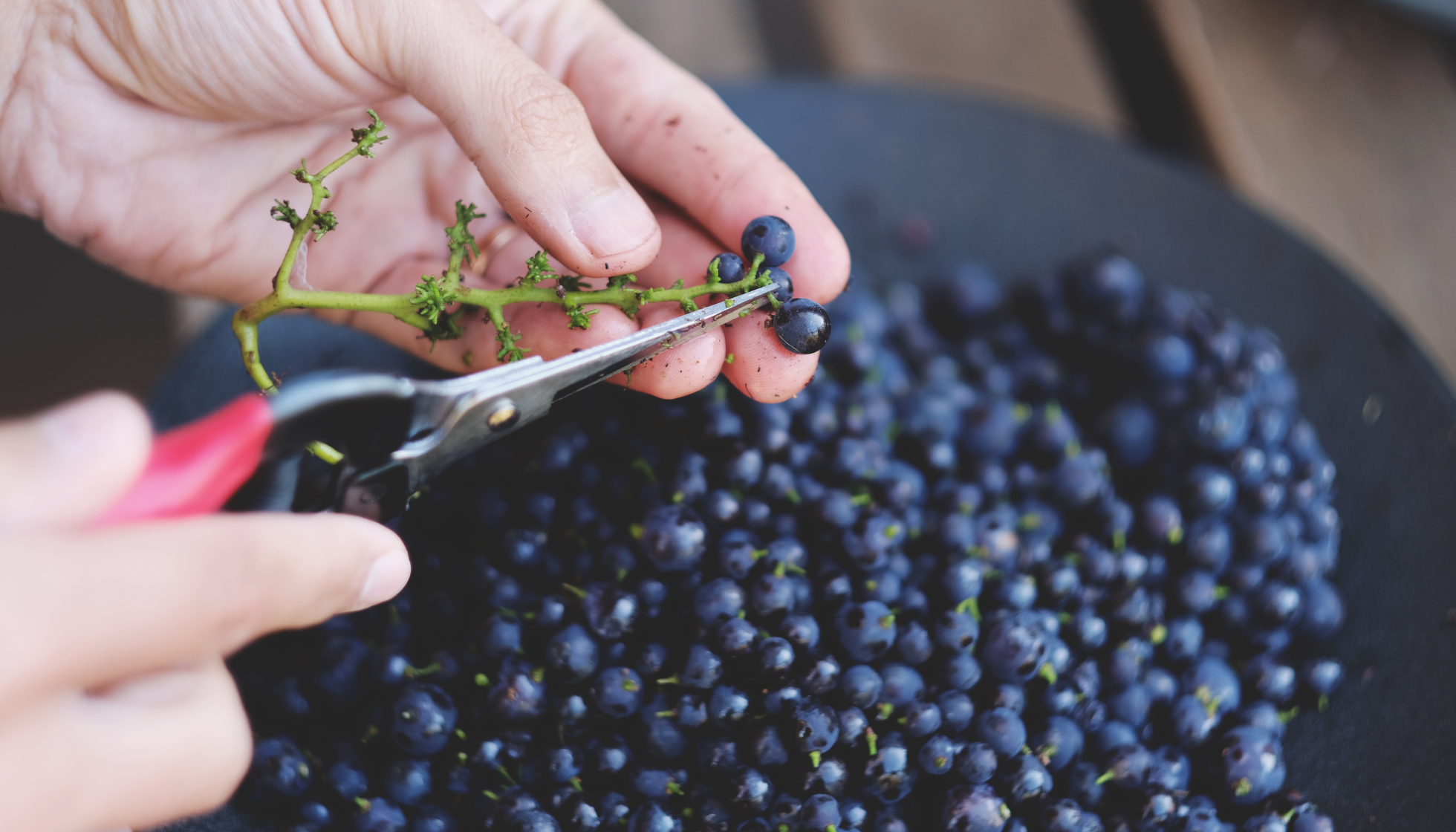 It was all somewhat surreal, and still is for many. We had friends and colleagues in and around Hobart who were immediately impacted, forced to close their doors, with businesses and livelihoods in jeopardy. Conscious of the emotional and mental toll this was having, we were scratching our heads, trying to think of a way we could bring the community together, especially given lockdown had coincided with harvest.

One of the most powerful women in the world of wine – a Burgundy vigneronne by the name of Lalou Bize- Leroy – uses a particular processing method for her Richebourg grand cru fruit. She has an immense team of sorters who proceed to snip individual berries off each bunch of pinot noir fruit, cutting the grape off with just the small pedicel (green jack) protruding. Her wines sell for thousands of dollars and she likes the resulting tannin expression; justification perhaps for an arduous and Sisyphean task that would be considered crazy and cost prohibitive for any normal winemaker.

I decided to send an email out to garner interest in such an idea. To really make it happen, we needed groundswell; enough pinot snipped to happily ferment and produce a barrel of wine. It was the 1st of April, so I waited until the next day, lest people think it was an April Fool’s Joke. The idea was to drop off S/M/L quantities (1, 2 or 3 buckets of pinot) to those interested, have them snip away in their slippers and pyjamas for a few days, then come back and collect the snipped buckets of pinot. A heartwarming, incredibly enthusiastic community response saw us undertake what was originally termed the “Hobart Wine Project”. Buckets of grapes were delivered to addresses all around Hobart, in the middle of vintage, at night, with a trailer. To the lady who was looking out the curtain of her window in West Hobart as I attempted a ninepoint- trailer-turn in a dead-end, before reversing back down the entire street, some decorum, please.

A stainless steel tank was then erected on the back of the ute and a multi-stage wild ferment began as these black caviar pearls were poured in, one address after another. Beyond the tannin expression that Madame Bize-Leroy espouses, there are other interesting things that happen to the kinetics of fermentation; intracellular dynamics, carbonic maceration, intensity of fruit expression, bunch character without green tannin and so forth. Moreover, an opportunity to do something truly unique, a one-off “time capsule” wine that was equal parts reaching out, motivating, keeping busy, empathy, excitement, intrigue and ambition.

The name – Hobart 27 – references the 27 individuals involved in the snipping of the grapes. A wine made by Hobart, so to speak. The front label of the wine is watermarked with the Tasmanian Waratah, endemic to Tasmania and a flower that blooms on the slopes of Mount Wellington, overlooking Hobart. The gold foil flourish symbolizes the extremely rare yellow waratah, but also acts as a map; Hobart the centrepoint and the small anthers of the stamens charting the addresses of all who had buckets of grapes delivered to them. One third of the wine is reserved for the participants, one third will be offered to venues of those involved (Agrarian Kitchen, Frank, Tom McHugos, Templo, MONA, etc) and the remaining hundred bottles will be made available for purchase, with 3-4 dozen reserved for charity and philanthropic causes. 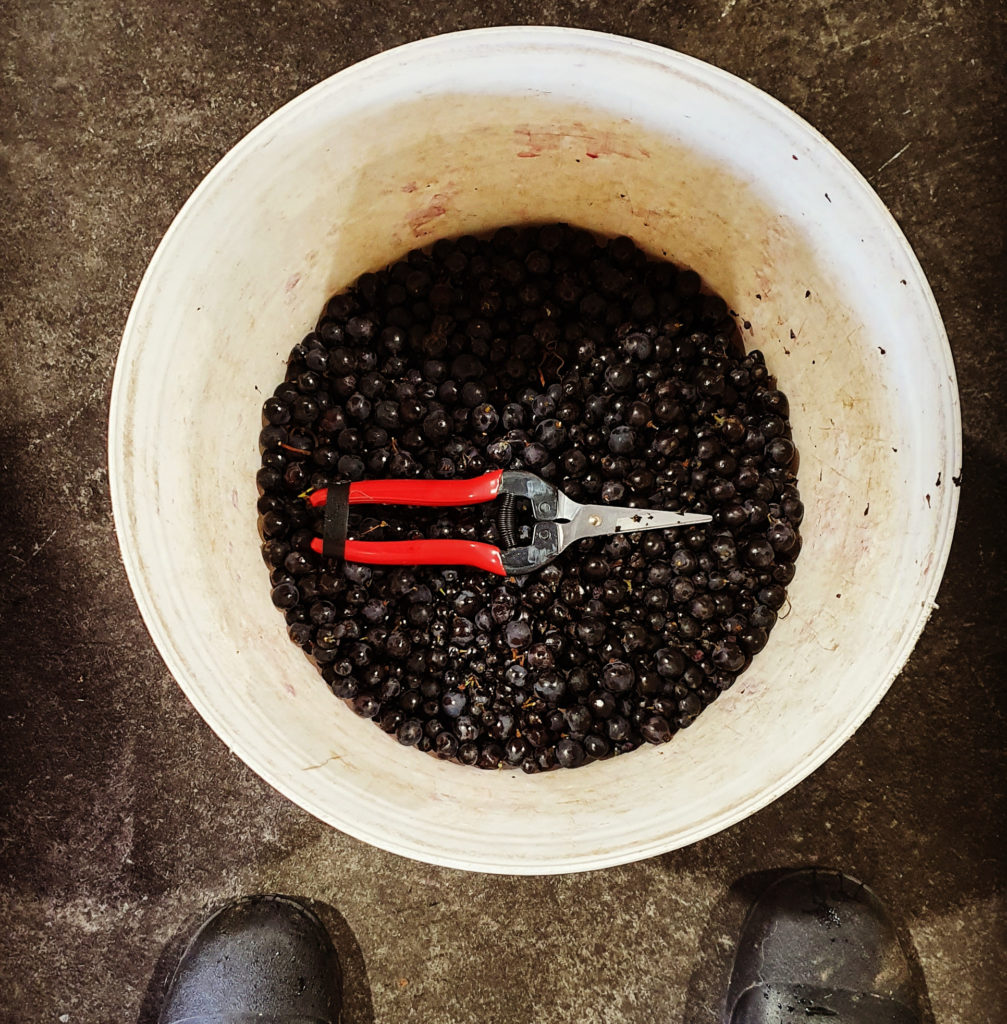 Part of the impetus for the whole project at the outset was mental health and wellbeing; banding together and bringing the community along for a ride that was hopefully a welcome distraction from the situation and unfolding events of the world. To that end, it’s equally important that any fundraising efforts directly impact and come back to Tasmania, ideally Hobart. It’s a wine and a story that is very much a one-off, that we hope people treasure as a special keepsake and an opportunity to recount the parochial Tasmanian spirit.

The 2020 Hobart 27 Pinot Noir was released on the 1st of July at a price of $270/bottle and is available direct from the winery until sold out. Venues involved with the project will have bottles available on their wine lists.