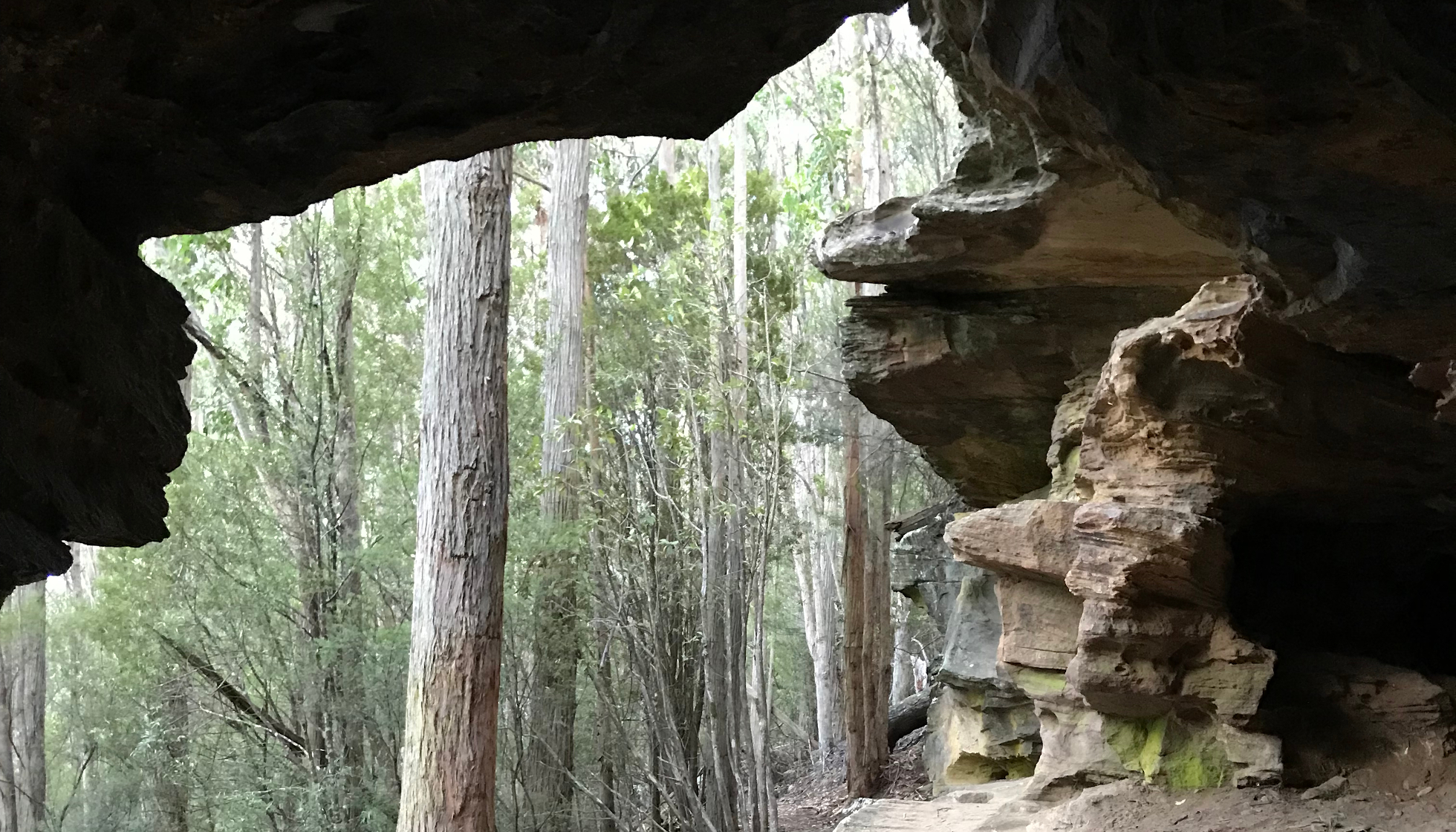 A simple cave provided the perfect hideout for one of Tasmania’s most brutal bushrangers – and you can easily walk to it from Fern Tree. Sarah Aitken went in search of the story of Rocky Whelan.

We love to romanticise the anti-authoritarian bushrangers of our colonial past. The Ned Kellys and Matthew Bradys get placed on a Robin Hood-esque pedestal, with stories of their daring heists and impressive bush skills interwoven with the fondness for underdog convicts that makes up a significant part of our national identity.

John “Rocky” Whelan was not just a bushranger. One of Tasmania’s first serial killers, he confessed to the brutal murders of at least five men (although he possibly killed 12, or more) in and around Hobart Town, and spent time on the run in the rugged bushland of kunanyi/Mt Wellington.

Whelan was a convict for most of his adult life, including for 18 years on Norfolk Island before he was sent to Tasmania. Bushranger expert and author Aidan Phelan, who runs the website A Guide to Australian Bushranging, shared that Whelan had an imposing physical presence: “He was a very intimi­dating man. He was over six feet tall, muscular and rough, his nickname coming from his “craggy” features and pock-marked cheeks.” Phelan said that even fellow bushrangers found Whelan unsettling – particularly when they witnessed his ability to withstand cruel and intense punishments in two of the harshest prisons in the colony.

Shortly after being sent to Tasmania, Whelan absconded from a road gang near Hobart Town, was recaptured, and sent to Port Arthur. He managed to also escape from the prison, and get past the dog-line, before returning to the Hobart area and hiding in the bush.

“Mt Wellington being so close to Hobart Town, and the traffic to and from it, meant that the opportunity for highway robbery was great,” said Phelan. “By utilising the natural features of the mountain he could live in seclusion, only emerging when he had to go to “work”, as it were. It was a perfect hideout for a predator like Whelan.”

He travelled great distances – robbing and murdering men from the Huon Valley to the Midlands. He came undone when he tried to get a victim’s boots mended in town. The boots had the missing man’s name on them and a constable spotted them sitting out the front of the shop. The victim, Magistrate Dunn, had been walking home along the old Huon Road bridle track when Whelan murdered him. Phelan said it was consistent with Whelan’s other crimes: “Whelan’s modus operandi seemed to be to bail up a traveller, rob them, then kill them by shooting them in the head or clubbing them to death, then dumping the body somewhere off the road.”

Rocky Whelan’s cave can be visited today – it’s a short walk from Fern Tree along the Fern Glade track – though there are a few other ways to get there so check your map carefully. The cave itself doesn’t offer much shelter and it is remarkable to think a man quite new to the area could survive a winter in that stark landscape.

Phelan agrees that on this point, at least, Whelan was impres­sive. “Here was someone that had been brought to Australia in bondage as a convict, and who spent most of his time here as a prisoner, yet was able to survive on his own in the bush with seemingly relative ease,” he said.

“It can be hard to comprehend, in this time of modern conveni­ences at the press of a button, how difficult the life of a colonist was, let alone the bushrangers, but places like Whelan’s Cave help us to get a taste of the ruggedness of the environment they sought refuge in and the isolation. Water came from streams, food was whatever you could hunt or steal, warmth and light came from fires, you had to be constantly on the move and every moment you had to be alert on the off-chance that a search party had finally caught up with you. There was very little romance in the life of an outlaw like Rocky Whelan.”

Whelan was hanged for his crimes at Hobart Gaol on 26 June 1855.