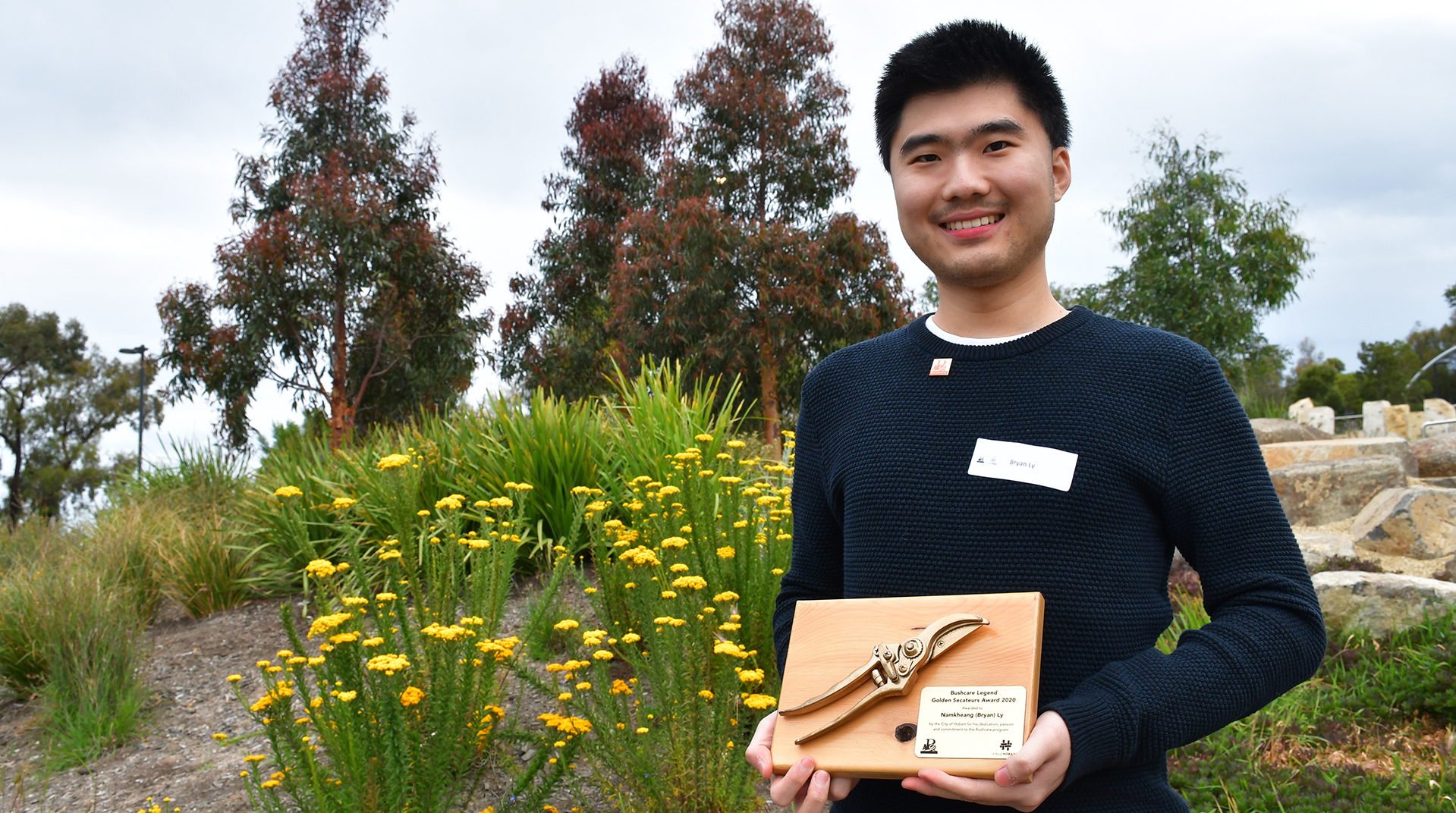 Founded in 1993, Bushcare is one of the City of Hobart’s most successful volunteer programs. Each year Bushcare recognises outstanding volunteers for  creating positive, inspiring and lasting contributions to the conservation of Hobart’s bushland reserves with the Golden Secateurs Award.

This year’s recipient was Namkheang (Bryan) Ly, a Cambodian born Hobart resident studying Communications Technology at the University of Tasmania.

Namkheang went from environmental novice to one of Hobart’s strongest advocates for nature in just 18 months due to his work with Bushcare. Starting with Waterworks Valley Landcare in 2019 he has since  branched out into the Cornelian Bay, Fern Tree, the Friends of McAulay Reserve and Lambert Gully Bushcare groups.

“I worry about the pace of deforestation and loss of wildlife on our planet and feel that I have to do something about it,” said Namkheang. “Volunteering with Bushcare lets me be part of a movement that is protecting wildlife habitat by getting rid of environmental weeds, planting native trees and shrubs, and getting others to join our cause. In Cambodia landmines still make it very dangerous to explore natural areas, but here in Hobart you can walk out your back door and be in a beautiful bushland reserve in minutes.”

Lord Mayor Anna Reynolds, who presented the award, said Namkheang was an inspiration to his fellow Bushcare volunteers.

“His enthusiasm for Bushcare isn’t just limited to weekly weeding forays,”said Mayor Reynolds. “He has introduced many new volunteers to the program, talks it up as a member of the Hobart Toastmasters Club, and has even convinced his body corporate to let him create a habitat garden in the block of flats he calls home. He is a wonderful advocate for the program and for our city’s bushland areas and a deserving recipient of the Golden Secateurs.”

Despite the difficulties of  COVID, Bushcare has hosted 103 activities this year, involving more than 600 volunteers who have contributed a combined 3180 hours of voluntary work in Hobart’s bushlands. If you’d like to volunteer or find out more about Bushcare you can go to hobartcity.com.au/Bushcare.