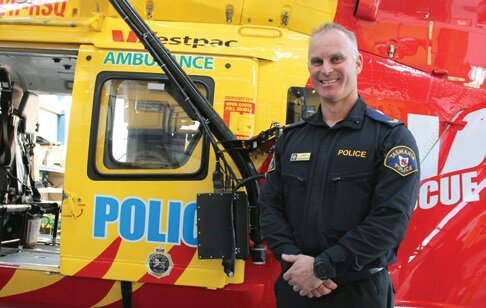 Josh Peach has been a police officer since 1995 and part of the Westpac Rescue Chopper team since 2009. We went behind the scenes at their air base in Cambridge to learn more about this important service.

Within Tasmania Police, is this a coveted role?
Yes, we had to claw our way in. My background is land search and rescue. I’m a rope access instructor, so did lots of cliff and cable rescues and was always exposed to the helicopter. The other crew, their background might be a police diver, or a marine police officer. All the team really fought hard to get in. You’ve got to really want to do it and there’s a lot of prerequisites.

Can you tell us about the two choppers we can see here in the hangar?
They’re painted in Westpac colours, our major sponsor. There are actually two of the rescue choppers, but one is being serviced. It always takes two helicopters to run one. The other aircraft here is our medical retrieval helicopter. It doesn’t have a winch or do rescues, it does medical transfers and road accidents—anywhere we know we can definitely land.

Are the pilots volunteers or police officers?
The pilots who work with us are all employed by RotorLift. They’re approved by the Tasmania Police Air Rescue Contract. There’s always at least two pilots—one for the rescue aircraft and one for the medical aircraft.

What’s the training like?
We’re very checklist and process driven, so if we don’t train for it, we don’t do it. We don’t go out on jobs and just make things up. In fact, when we were filming the Air Rescue show (on Channel 7) we’d go to a rescue, and they’d say, “Oh, this doesn’t look very exciting, you’re too calm, can you make it sound a bit more dramatic?” That’s not what we do.

How often do you go out on a rescue?
Between December and March, almost every day. Outside that, one to three times a week. Over the summer months we’re busy and constantly rotating crew for fatigue reasons. I might do two or three jobs during the day, then my hours are ‘cooked’ as we call it and someone else takes over that night. And you can guarantee they’ll fly two or three jobs that night and to top it off, the police also crew the medical helicopter and those jobs can be quite long.

Have any rescues stayed with you?
Probably the ones that don’t end so well. I seem to have a connection to Federation Peak. It’s the hardest point to climb. I’ve had two incidents where I’ve been to deceased people there. There was a recent one, two or three years ago. We got a call from a girl who had lost her friend, she could hear that she had fallen. I’d only been there a week before on search and rescue training so I knew where they were. It was all a bit raw and unfortunately we got there the friend was deceased. I’m still actually in contact with her today. She’s a nurse in Launceston so occasionally we cross paths. I guess the happy-go-lucky ones don’t really stick in my mind that much.

Are there people you can talk to afterward?
Yes. We have a critical incident stress management protocol. Unfortunately, they’re the ones that I think of all the time, but the good ones far outweigh the bad. The good ones are when someone’s really injured and we can help them. We had one a year ago on the Loddon Plains Track where the gentleman had fallen over. We treated it seriously and then found out two days later he in fact had a broken neck. He was put in a stretcher which was really difficult to do in that circumstance. The paramedic did an exceptional job on that one. We followed the rules and everything went right.

How far away can you rescue?
It will fly on one tank of fuel for about two and a half hours. That will get us easily to Flinders Island from here with about 30 to 45 minutes left over. We’ve got fuel bases strategically placed all around the state.

Are you thrown around in rough weather?
We’ve got at least six sick bags on it! It’s got a rigid rotor head. Some helicopters will move with the wind and rain, but this is fixed. Think of it as a four wheel drive with stiff springs, it’s very tough. The ride quality is terrible but it’s very strong.

Does that help you or create more work?
It’s a bit of a double edged sword. Nothing seems remote anymore. I do think the button is pushed a bit more but on the same token when an EPIRB goes off, the whole search aspect is taken away – we know where we’re going, we just work out how we’re going to fix it.

Is it a hard decision to call off a rescue?
It probably sounds cruel but it is a bit more like a checklist. We don’t base it on someone’s injury –that’s got nothing to do with it. We do what we can but if it’s unsafe we stop. It adds a layer of difficulty at night if we’re doing a search with goggles, particularly windy nights, so we’ll do what we can and come back in the morning.

How long does it take to get out the door?
It will be off the pad in under five minutes. It can be a bit longer at night. There’s a few more flight plans that need to be put in so it’s never rushed. The day we rush is the day we muck it up. If it’s poor weather and at night it could take 15-20 minutes. If it’s daytime with no cloud, under 5,000 feet, not much planning is required. If the pilot can fly visual it’s easy. The worst we would do is poor weather at night over water. That’s our most dangerous. Looking through goggles, the pilot is very, very busy overwater at night. They’re the ones that take the most gear and the most planning before we go.

Ahead of summer, what’s your message for people getting out and about?
Make sure you take an EPIRB and tell people where you’re going, have a plan, take your mobile phone but don’t rely on it. If you’re over water, make sure you are wearing your life jacket and look at the weather report. www.westpacrescuetas.com.au/