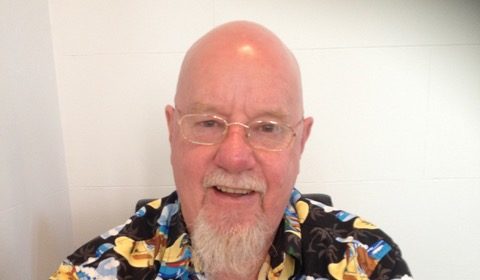 Ron Hastie started his working career as a bricklayer, only to find nursing and then midwifery later in his career. He now runs a special program to ease new Dads into parenthood.

You trained and worked for a number of years as a midwife here in Hobart. Can you tell me about that? My wife Sue and I came to Hobart in 1995, initially intending to work here for two to three years. I had heard about the Know Your Midwife (KYM) scheme at the Royal Hobart Hospital (RHH), one of only two in the country, and it sounded like a good way of working. Neither of us had work lined up and just figured something would work out. Both of us had jobs within a few weeks, Sue being a Primary School teacher. I was a fairly inexperienced midwife at that stage – I became a midwife at age 36, something I had been striving for since I was a student nurse in my early 30’s. Prior to falling into a nursing diploma, I had been a bricklayer for about 10 years after doing a three year apprenticeship under my father, having left school after a mediocre year 11.

In Hobart I also met a couple of other male midwives – often this was blokes who had come to health work later in life too. After a couple of years being casually employed I managed to get permanency and started in the KYM scheme where I stayed till my retirement in 2017. Most of my midwifery work life I was the only male midwife on the scene. Blokes represent about 1% of the midwifery workforce. I really loved my time as a midwife, despite feeling somewhat of an imposter in a very female dominated field of work and exclusively female clientele! The good thing about KYM meant the women knew that there was a guy in that scheme so it was easy to avoid “the man” if they preferred not to have a male caring for them. I would never want to impose myself on a family not wanting a man to care for them. Birthing should be about choices of where and with whom you want at your birth. Happily over time I built somewhat of a reputation as a midwife and I’m still rewarded to this day when a woman recognises me in the street and introduces her teenage “baby” to me that I may have assisted to birth or breastfeed.

You now run Beer and Bubs, a support get together for men about to enter, or are new to fatherhood. How does it work? In 2012 I came across Beer and Bubs, a one off childbirth education session for fathers to be held in pubs. I thought it sounded interesting and something I figured I could do as I had been doing parenting and childbirth classes at RHH for about 10 years. So I made enquiries. Beer and Bubs was started in Sydney in about 2004 and spread out as a franchise around the country to about a dozen cities. Again, I was the only bloke doing it, the rest were mostly childbirth doulas. Doulas are defined as; a woman who gives support, help, and advice to another woman during pregnancy and during and after the birth. In my time taking classes at RHH the focus tended, by necessity, to be on the women so I felt there may be an opening for a program that focuses on the guys, in a guy-friendly environment and Beer and Bubs fits this to a tee.

Do you think men get left behind in the “becoming a parent” phase? Beer and Bubs purely focuses on the dad’s role while his partner is in labour, however in my 10 years of doing Beer and Bubs I have further developed the session into some basics of the early months and years of fatherhood and their part in their child’s development and destiny. There really isn’t a lot of parenting advice aimed specifically at the dads, and at every Beer and Bubs session a different dad comes back to tell of his experiences. The guys really love to hear this first hand from the horse’s mouth, so to speak.

Do you have any gold nuggets of advice for a man about to become a father? Or who are in the thick of it? The best advice I can give blokes is show-up – by this I mean for both birthing and parenting, being present with your partner, with your child, in the moment and don’t overthink it, just be there.

If a father is experiencing issues, or he suspects his partner is suffering post natal depression, what would you suggest he does? If a father is worried about himself or his partner, talk is therapy for everyone, so talk, talk, talk! There’s plenty of other help out there too, be it your local child health nurse, your GP, or online services like beyondblue.org.au or panda.org.au. Don’t keep putting it off, help with mental health is as important as help with physical health.

How can readers get involved in Beers and Bubs? Should a reader feel Beer and Bubs could be for them, or their man, go to the website for more information beerandbubs.com.au