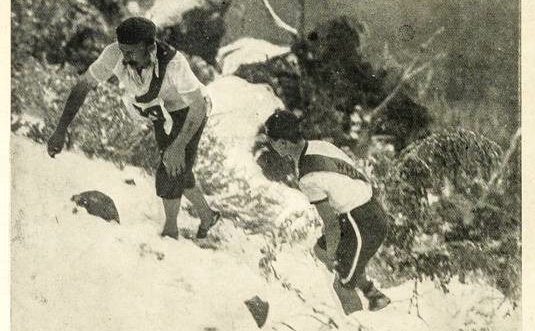 A morning of wild weather had settled in over Hobart as 39 competitors took their mark at the starting line of the Go-As-You-Please Race on the afternoon of Saturday, September 19, 1903.

The gentlemen were to run to the pinnacle of kunanyi/Mount Wellington and back, encouraged by a double-barrel shotgun offered as first prize. But what really drove the competitors was their fight to be the best, strongest and fastest man.

Perhaps it was this pursuit that cost competitors Mark Richards, 31, and George Radford, 19, their lives.

Maria Grist, who has dedicated her life to researching the history of Hobart’s famous mountain, said events like the Go-As-You-Please race were a “craze” and would draw competitors as far as Buckland.

It was about ‘proving yourself as a man’,” Maria said.

Both Richards and Radford made the 1,271-metre climb to the summit, but the treacherous weather conditions cut their celebrations short.

As the blizzard-like conditions worsened, Richards and Radford began their ill-fated descent back to town.

The competitors were likely suffering from hypothermia according to Maria, but Richards and Radford weren’t pulled aside and gently warmed up.

“In those days, people did the opposite,” Maria said.

“They said ‘come on, be strong, keep going, you can do it… sometimes, they’d give them some whisky to warm them up.”

Competitor Arthur D’emden saw Richards struggling and attempted to help him down the snow-covered track and hoisted him on his back.

With a convoy of helpers, he tried to save them by then unconscious Richards.

They eventually reached the Springs and the safety of Gadd’s cottage. But it was too late. Richards was dead.

After scraping frozen snow off his race singlet, Radford then sealed his fate by continuing his descent via the Finger Post track, rather than following the race-route to St Raphael’s Church.

Hours later, when the race had concluded there was still no sign of Radford.

As the sun rose the following morning, 19-year-old Radford was found lying on his back in the snow, his feet tangled in the branches of a tree.

The race would never be run again. Monuments to mark the deaths of Richards and Radford now stand on kunanyi/Mount Wellington.

They serve as a sombre reminder to all those who pass them of the first, and last, Go-As-You-Please Race