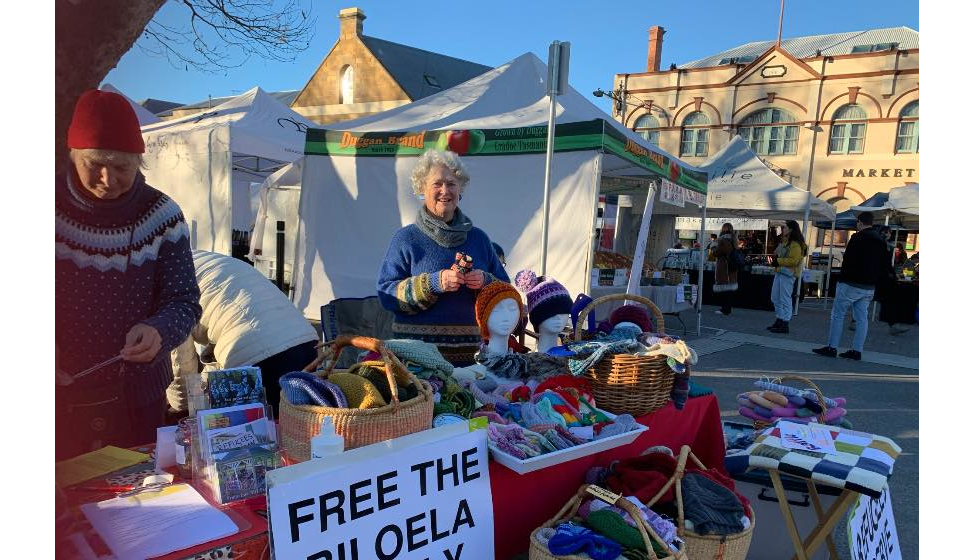 Every Friday (give or take a week here and there) for the past six years, a group of Tassie Nannas can be found at the Elizabeth Street Mall, knitting, selling their craft, and raising aware­ness for refugees held on Australian soil indefinitely.

Six years since it came to fruition, these Nannas are on a mission to free their fifth refugee held indefinitely in refugee camps on Manus and Nauru Island. Working with a Canadian-led response, Operation #NotForgotten, the Nannas are knitting a refugee to freedom in Canada. We chatted to the Tassie Nannas about how they got started and how the Hobart community has helped rally behind the cause.

What started this peaceful protest? In 2014, some grandmothers at a party were expressing their horror that refugees, including families with young children, were incarcerated by Australia in punitive conditions on Nauru. We decided we HAD to do something, we couldn’t stand by and watch terrible things continue to happen to innocent people who came believing our country would help them. We started by writing letters to the editor and to politicians, got nowhere fast and in November 2015, inspired by the Knitting Nannas on the mainland, began knitting in the mall on Fridays. Six long years later we’re still there. Two years ago, we tired of waiting for decency and compassion to infiltrate our government and decided to work to privately sponsor refugees to Canada.

How does Operation #NotForgotten work? Operation #NotForgotten is jointly run by the Refugee Council of Australia (RCOA) and a Canadian group, Mosaic, which places and supports privately spon­sored refugees who have been on Nauru or in PNG in Canadian communities. The two main groups are assisted by several others, including the UNHCR and AdsUp, a group of Australian expatriates in Canada.

What role does Hobart play in helping to free refugees? We believe we’ve helped change attitudes to refugees — there’s been a shift in opinion nationally on this issue, unfortunately not reflected in government policy. We cooperate with other groups like the Amnesty Refugee Action Group and Rural Australians for Refugees on actions such as vigils, rallies and honkathons and we also lobby for a more humane refugee policy. Tassie Nannas hold stalls selling knitted items at markets, to raise money to sponsor refugees to Canada. So far, we’ve raised enough for four sponsorship applications, and are well on our way to a fifth.

Who have Tassie Nannas helped free and where are they now?

We know refugees have started going from here to Canada again after the long delays caused by COVID, and we know we’ve funded four applications to send refugees there. RCOA and Mosaic don’t usually release the details of those they help to freedom, for privacy reasons and to protect family members still living in the dangerous places they fled from. To date the Refugee Council of Australia has raised $3.8 million for its Operation #NotForgotten, including $80,000 from Tassie Nannas!

What would you like to see happen in the future for refugees still held in detention centres in Australia? We think they should be assisted to settle permanently here in Australia, or failing that, in a comparable country. For example, New Zealand has offered to take 150 a year. They came seeking Australia’s help, and have been forced by our gov­ernment to suffer cruelly, despite being Australia’s responsibility under inter­national law. They are also people with considerable drive, courage, and strength, often highly educated. Surgeon Munjed Al Muderis, 2020 Australian of the Year and a refugee from Iraq who came by boat before 2013, makes the point, of which he is living proof, that they have much to contribute to Australia.The thou­sands of refugees living in the Australian community on temporary visas, unable to move on with their lives and fearful of the knock on the door that could mean reincarceration or deportation, must also be given the same chance of permanent settlement.

When you started six years ago, did you expect to be here this long? We planned to raise local awareness of the refugee issue and wanted to change refugee policy. The #KidsOffNauru success is a bright spot and while we think we’ve succeeded, as we’ve become quite well known for what we do, we didn’t expect six years ago that any government would be so cruel as to let people live in limbo, often in appalling conditions, for so long. We were wrong. We’re still trying.

You can stay up to date with the Tassie Nannas by joining their mailing list and via the Tassie Nannas Facebook page. More hands make lighter work so hit them up if you’d like to get involved too. tassienannas@gmail.com