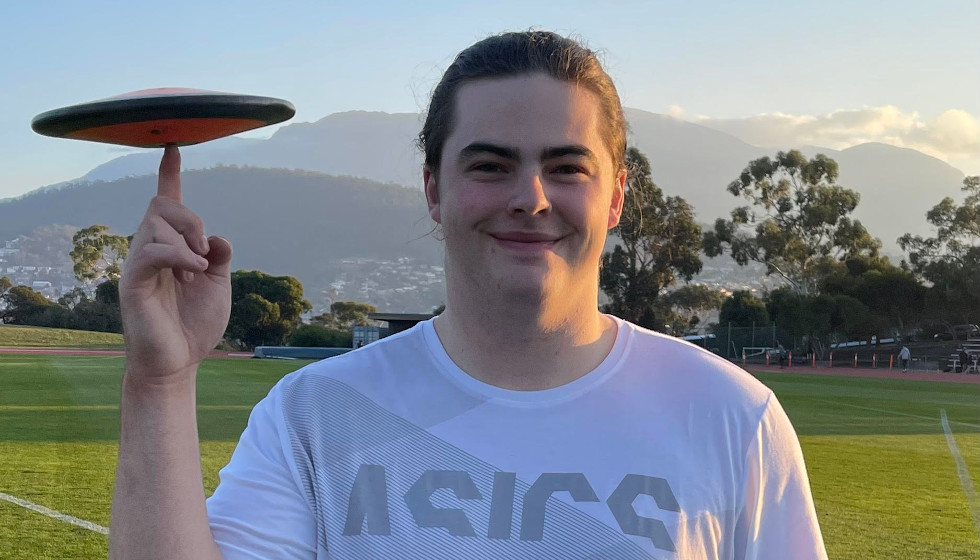 A young man with a solid throw on him, 18 year old Hobart discus athlete Jack Mellor has just been selected in the Australian Athletics team for the very first time.

Where are you from and where do you live now? I’m from Hobart and have lived here, in Granton, my whole life.

Why Hobart? My family were born and have lived in Hobart for the majority of their lives and chose to raise me here. From a more personal perspective, I love Hobart because of its relaxed feel, natural beauty and the laid back vibe. Traveling all over Australia quite frequently can be quite chaotic, so it makes it refreshing each time I return home.

Tell us a little about your work? Currently I’m a full-time discus thrower and soon I will start a role with Muscular Dystrophy Tasmania as an ambassador for their cause.

Have you always focused on this sport? When I was younger I played AFL and cricket for a few years, however the majority of my sporting life has been spent doing athletics. I’ve competed in track and field since I was five years old, which at the time was to just make friends. I never decided to specialise in discus until I was around sixteen when it was around time to transition into the senior aspect of track and field.

Congratulations on being selected on an Australian Athletics team for the first time. Can you describe how throwing in Hobart has created this opportunity? Hobart (in my opinion) has one of the best throwing facilities in Australia for many reasons such as the circle, wind etc. However Hobart has created a more important opportunity, to be surrounded by the Peacock Family. Evan, Hamish and Huw have been watching and assisting my journey for the past three years, they have helped greatly. I wouldn’t be where I am today without them.

Have there been any roadblocks in this opportunity? Just before I started taking throwing seriously, we found out I have Femoral Anteversion, the inward rotation of the femur bone. This caused some problems during my throwing and in daily life. There was discussion about a possible surgery to correct it, but it was decided to rehabilitate with a physiother­apist. I had roughly nine months away from sport which was a much better option than having surgery.

How do you prepare for these compe­titions? Many see discus as a brute event that requires strong arms to throw it far, whilst that is partially true there’s so much more to it. You have to be as explosive as a 100m sprinter, as strong as a strongman, as powerful as an Olympic weightlifter as well as having great flexibility and body awareness. However you can’t apply any of those attributes without technical coordination. So we work on all of those attributes, explosiveness, power, strength, flexibility, body awareness, but mainly it’s the technical aspect of the throw itself that gets paid the most attention.

What has been the biggest highlight of your career so far, and what is the big goal? My biggest highlight so far would be placing 7th in the Australian National Championships as an under 19’s athlete. The big goal initially was to represent my country, which in less than a month’s time I will do. The big goal from this point forward will be to work on representing Australia again at higher level compe­titions such as Commonwealth Games, World Championships and possibly the Olympics. I’m willing to put in all the work necessary to achieve these goals.

What do you love doing outside sport? Bushwalking, catching up with friends and gaming.

Favourite podcast or tv show? Currently I am listening to the Throw BIG Throw FAR podcast on Spotify. My favourite tv show would have to be Seinfeld.

What gets your goat? When people at the gym don’t pack up their weights!

What was your first job? I’m yet to enter the workforce but I’ve been associated with many charity groups since I was fourteen which has led to me recently becoming an ambassador for Muscular Dystrophy Tasmania.

What are your daily news/social media habits? Usually upon waking each morning I scroll through Facebook for 5-10 minutes as I follow all the main news platforms on there.

Your favourite place for…

Favourite Hobart secret? It’s literally in the name, visiting Secret Falls with my Dad when we go bushwalking.

Pssssst. Jack needs some extra help to make it to Mackay, followed by Saipan with the Australian Athletics Team. Fees and levies for Jack to compete have added up to $7000. If you’re in a position to give some financial help or sponsorship, let us know and we can pass along some details to get this young gent flying. Go Jack!