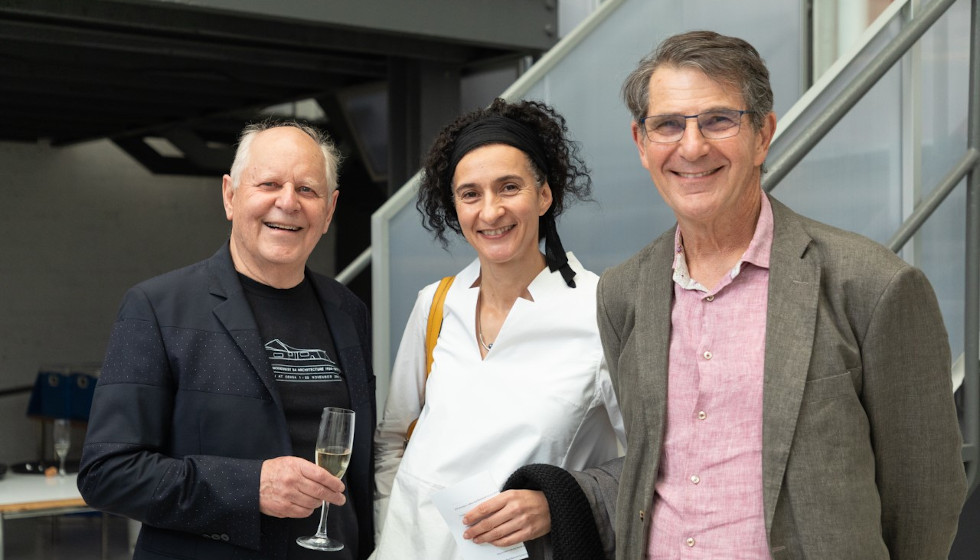 As an architect, Tim Hurburgh has worked on some incredible projects around the world. Since relocating back to Tasmania, he has turned his creative attention to poetry, releasing his first book.

You grew up in Hobart, graduating from the Hobart Technical College in 1966. How did your Tassie childhood inform your future? I was fortunate that my parents had a new house designed and built beside the Derwent (opposite MONA) when I was 11. I looked forward to travelling out every weekend for inspections – watching the skill of the workers, the tools and machines, and experiencing the unique sounds and smells. I became fascinated that spaces and forms could be created just from one’s imagination. Although none of my family were architects I was completely hooked. I knew then I wanted to be an architect.

You’re an accomplished architect. What have been some of your career highlights? After graduation I designed three houses on magnificent Hobart sites at Kingston, Blackmans Bay and the Grange, I thought life couldn’t get much better. This work helped me to secure a scholarship to study at Harvard University in Boston with my wife Isabel, which was a tremendous privilege. Later I worked on the RMIT Textiles Building in Brunswick, pioneering all timber facade on a multi level institutional building, which as inspired by my Tasmanian heritage and in particular the Derwent Valley’s famous Oast Houses led to a national reappraisal of the use of timber in construction. And I also worked on the Swinburne University ATC in Hawthorn, which was the first education building in Australia to receive 5-star green star accreditation. I’m also proud of the RBF offices in Kirksway Place responding to the rhythms of Salamanca below, and a recent Hobart house which has been published and featured in awards.

You were recently appointed as jury member and chair of the Tasmanian Architecture Awards. What do you find most compelling and distinctive about Tasmanian architecture? There is a uniquely Tasmanian passion and intensity amongst our arts community. This is reflected in architecture with bold original concepts and a focus on immaculate detailing.

After a career in Melbourne, you now divide your time between Melbourne, Ouse and Hobart. What prompted the move? We have regularly returned to Tasmania and more recently my family have become involved in a family farming business at Ouse, where we now I travel to Melbourne once a month for a few days.

You also write poetry. How long have you written for? I’ve always dabbled in poetry – its abbreviated, cryptic format appeals to me. There is also an historic tradition of architects writing poetry from Michelangelo, Thomas Hardy to John Betjeman. I’ve written and studied poetry more seriously in the past four years.

‘Disruptions’ is the title of your first book of poetry. Why did you choose that title? I originally chose Disruptions as the title for the major poem I wrote about the mental disruption of growing up and then working in diametrically opposed environments. Later it seemed fitting as the book title in a contempo­rary world disrupted by cataclysmic unexpected events – first Covid and now Ukraine. Together with massive strategic disruptions to the global status quo: cryp­tocurrency to the world’s financial system and the ubiquitous impact of social media.

How do you describe this collection of poems in your book? It’s an eclectic col­lection with a Tasmanian focus, embrac­ing personal passions and universal themes of the environment, special places, relationships and life events. I’ve mostly written it in Tasmania in vibrant style with humour and candour.

Why did you decide to publish your book of poems? I had shown a skeleton of the book and some of the principle poems to well-known Tasmanian media personality and champion of the arts, Judy Tierney. Judy’s advice was as I’d achieved a significant milestone which family and friends would appreciate, I should continue and try and get it pub­lished. I was delighted when Hardie Grant provided this opportunity.

Is there a thread that runs between your creative pursuits? I’ve enjoyed creating something from nothing: from just an idea. My buildings, poems, and stories are all constructed around either a brief, situation or event. I then develop refine and polish them until they’re ready to ‘see the light of day’!

What do you like to do outside archi­tecture and poetry? I enjoy pottering for relaxation…Winston Churchill once said relaxing wasn’t doing nothing, it was doing something different! In my case mostly around the farm. And I’ve played competition Real Tennis interna­tionally. A game I discovered in Hobart whilst a student which has taken me to amazing places around the world. Robert Fahey, from Hobart is the current world champion.

What do you love to do in Hobart? I love to walk around the docks: the colour of the sky, the ripple on the water, the clanks in the rigging tell all about a Hobart day.

And for some fun…we’ve heard that nothing rhymes with purple and orange! Have you found any other words par­ticularly challenging? No actual word, but prepositions as a class of words are definitely the most challenging! If, on, with, from etc. We all use them instinc­tively but in poetry they are ‘Verboten’! Only lazy poetry uses prepositions! PS. Curple rhymes with purple but only a super keen horse lover would know that!