Tasmanians have always been keen on boats, understandably as an island girt by sea and, accordingly, many glorious beaches. Hobart already has a high rate of boat licence holders and that number is set to increase with Marine and Safety Tasmania (MAST) reporting boat training bookings are up two-and-a-half times on previous summers.

Sailing seems an ideal Covid-19 safe holiday adventure. Though you may want to carefully choose who you are sharing your berth with, once under sail you’ve got fresh air, freedom, and the possibility of the open sea. Without ever leaving the state you can travel to new and exciting destinations – or old ones glimpsed from a new perspective. Even if you don’t own a boat and have no plans to own one in the immediate future you can still take to the sea. Be it day trips, chartered cruises, kayaks, canoes, or driving your car to the beach, anyone can enjoy the ocean this summer. Bruny Island is only accessible by boat – even non-boaters have to catch the ferry from Kettering. Half the glory of the island is its magnificent coastline, constantly being circumnavigated by sailboats and kayakers. Keep your eyes open for the wildlife – seals and fairy penguins in the sea, albatrosses and wedge-tailed eagles in the sky, and on the shore the rare white wallaby.

For the boatless, there are a couple of options to chart your way to Bruny including Hobart Yachts and Sailtas. Both offer exclusive boat chartering or pre-planned tours with trained crews, day-trips or overnight berths. Sailtas, also offer a semi-educational experience allowing you to choose how much sailing you wish to participate in from hauling rope and dodging the boom or sitting back with a glass of champagne and yelling “great job darlings, look out for that boom!” (the boom is the horizontal mast-thing on the bottom of the big triangular sails and often swings across the deck of the boat as the wind changes directions, one of the most common causes of injury on boats).

It’s often assumed the iconic pops of orange lichen you see on the rocks around Binalong Bay are what gives the Bay of Fires its name but it actually refers to Aboriginal fires seen along the coastline by Captain Tobias Furneaux when he sailed past in 1773. There’s still a lot of surviving evidence of the long history of the local kunnara kuna tribe including middens (shell and bone dumping grounds) and protected burial sites. Sailing to Binalong from Hobart is no easy task so even the boated amongst us may choose to come by land and partake in the Bay of Fires Eco Tours a two to three-hour tour along 17kms of the pristine coast of the Bay of Fires Conservation Area departing from Binalong Bay.

For those of you who want to experience the sea but don’t want to buy or hire a boat there’s kayaking – you’re closer to the elements, it’s a straightforward human-powered propulsion system, and encourages the development of really buff arms. Kayaks are also a lot cheaper than a whole boat and once you own one you can bung it on your roof racks and sail it anywhere you like.

Roaring 40s Kayaking is widely considered one of the premier kayaking experiences in Tasmania. They offer a range of different adventures, from paddling tours around Hobart, to multi-day expeditions to Flinders Island or around Bathurst Harbour and Port Davey. Esperance Adventures will take you even further south to the Lune River, the Huon River, Recherche Bay and Port Esperance. If you’re after an unguided experience, Freycinet Adventures in the National Park are one of the few services that offer kayak rentals. Or you can eschew the salty sea altogether and go for the freshwater experience of White Water Rafting. 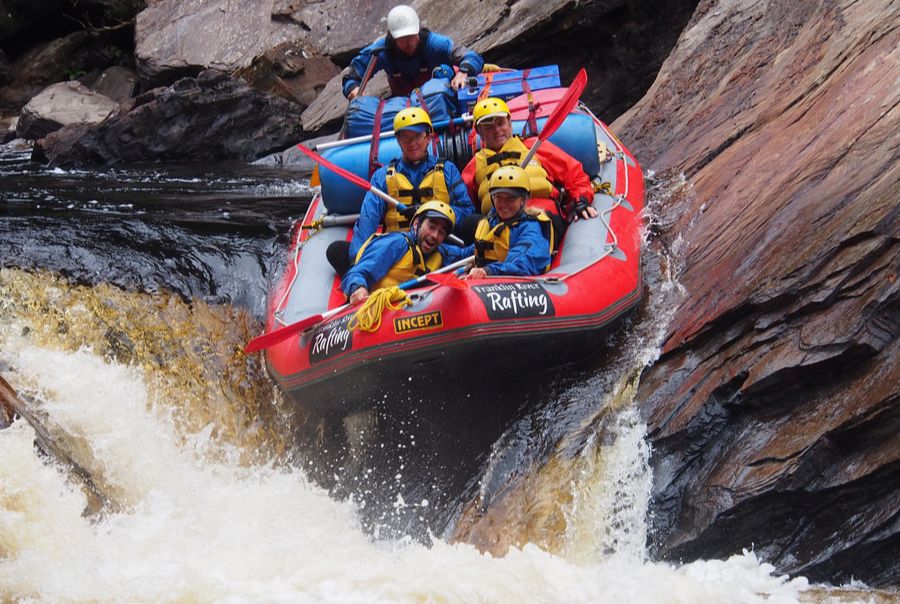 White Water Rafting can be found all over Tasmania. King River Rafting offers one-day experiences near Hobart – on the Derwent River and the Tahune Twins- as well as on the West Coast along the King River. For the more dedicated, Franklin River Rafting specialises in uninterrupted eight-day and 10-day tours the wild and sublime Franklin River.