The Wapping That Was 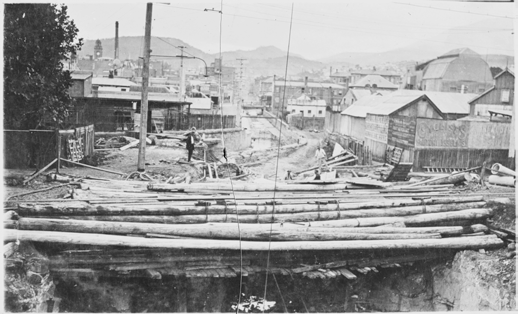 Early Hobart’s Wapping district was known for grisly murders, prostitution and poverty. It was also the economic centre of town in the first years of settlement and home to Australia’s oldest working theatre, the Theatre Royal.

The Wapping area was bordered by Liverpool, Campbell and Macquarie streets and to the east Park Street (now the Brooker Highway). Wapping took its name from Wapping in London, a suburb along the Thames with a similar social profile – that of poverty, drunken revelry and disease. Both sites were once places of executions. 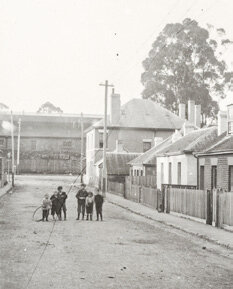 Wapping was a hub of economic activity with whaling, sealing and shipbuilding providing employment. With cheap rent and the proximity to work, Wapping became a popular housing area. The people of Wapping worked at nearby markets, tanneries, Peacock’s jam factory, the gasworks and a slaughter house. Among the many pubs and worker’s cottages, the Theatre Royal opened in 1837.

While Wapping had a closeknit community it also had a reputation for danger and drunkenness. There were 13 pubs counted in just a few blocks.

There were reports of sailors drinking themselves to death, and grisly crimes.In the 1820s Wapping resident John Leach stabbed his wife to death with a stick for “unfeminine” behaviour. She cried out for help for 30 minutes but no one came to her aid.

Amid what was described as a “slum” there was also a stench in Wapping. The area was prone to flooding and two streams emptied into the flat, muddy ground including the town’s water supply and the Hobart Town Rivulet which was polluted with human and industrial waste.

The Depression in the 1840s and the development of the port at Sullivans Cove was a catalyst for economic and further social decline. In 1875 public transport began with the construction of Hobart’s railway station and later a tram depot in Wapping.

In the 1880s the population of Wapping peaked at 1200 people but as the Hobart City Council continued to redevelop the area, housing began to disappear. By the early 1960s remaining houses in Wapping were demolished and the area was zoned for transport purposes. 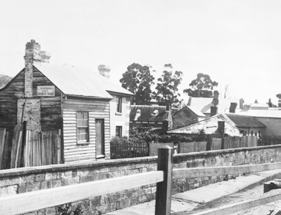 Today the Wapping streetscape has all but gone, apart from the back alleys behind the Theatre Royal. There are also remnants of bricks walls and the gasworks chimney. The area is now home to inner-city apartments worth upwards of $500,000. A long way from the early Wapping days of cockfights, prostitutes plying their trade and drunk sailors at the Theatre Royal tavern. ■