The Origins Of Salamanca- Then And Now 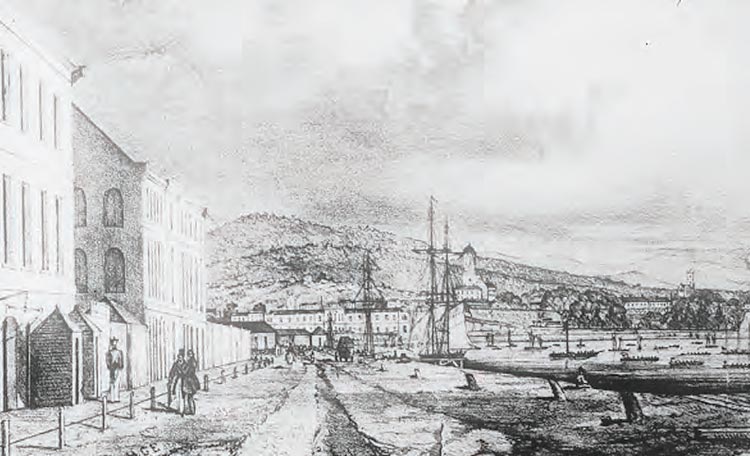 Before Salamanca became Hobart’s hotspot for a good meal, diverse artwork and bustling markets, it was a hub of a much different kind. Known as New Wharf throughout the 1800’s, Salamanca was one of the largest whaling ports in the world and has been evolving ever since.

Unlike the Mona Roma and Peppermint Bay catamarans that shuttle art-lovers and foodies across the Derwent River, the ships arriving in Sullivans Cove in the early 1800’s were packed with convicts, merchants, immigrants and troves of goods, the most valuable being whale products such as oil, baleen and bone.

It was in the 1830’s when Old Wharf (now Hunter Street) became overloaded by the booming whaling industry, and influx of ships, people and goods. Merchants required storage space at the port, so convicts were tasked with quarrying out the cliff face below Battery Point to develop New Wharf. They cut the sandstone and used it to construct the iconic sandstone warehouses we are all familiar with today. The warehouses were built to store whaling products, wool and grains, but they are now home to local favourites like the Salamanca Arts Centre, Jack Greene, Grape, Rockwall and Irish Murphy’s.

Along came the 1900’s and so too the decline of Tasmania’s whaling industry. It was time for a change of pace and an industry a little more typical to Tasmania – apples, fruit and jam. “The Apple Isle” was born and the sandstone warehouses were converted into jam and fruit processing factories, a chapter in Tasmania’s history that is still alive today as the Henry Jones Art Hotel. The factory workers called Battery Point home. A world away from today’s charming cottages, cafés and restaurants, Battery Point had a much rougher vibe in the early 1900’s.

Next time you are socialising the night away at Rektango, imagine quarrying out the space you are dancing in. Next time you are eating a meal at Syra or Maldini, imagine you are processing fruit and sticking labels on jam jars. Or when you are taking in all the colourful sights and smells at Salamanca Market on a Saturday morning, imagine maneuvering around sailors and convicts who are moving whale oil from ships into warehouses. Who knows how Salamanca will transform over the next century?