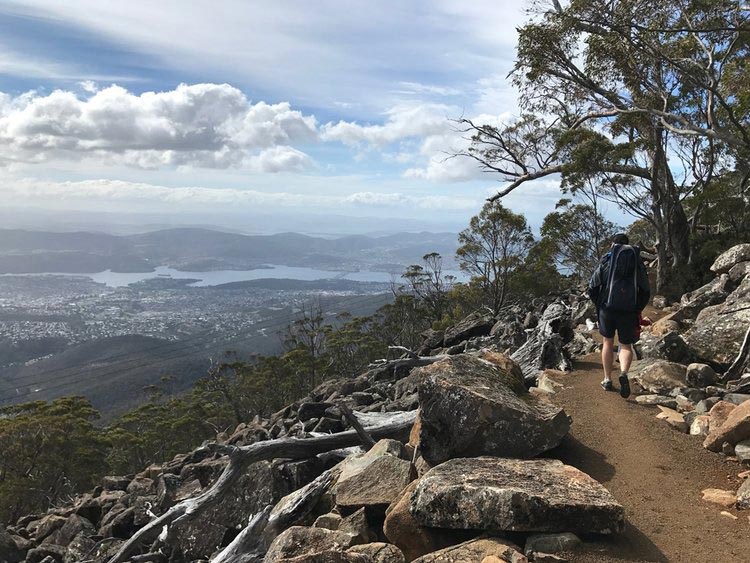 Kunanyi / Mt Wellington or simply ‘the mountain’ to us locals, Hobart’s most significant landmark was formed during the Permian, Triassic and Jurassic ages.

Despite popular myth, the mountain is not a dormant volcano. However, a small volcanic vent was active about 300m south of the Pinnacle between 50 and 100 million years ago.

The Palawa, the surviving descendants of the original indigenous Tasmanians, favoured the name kunanyi for the mountain and in 2013 the dual naming policy was announced.

The first white man to record the mountain’s existence was Lieutenant William Bligh in 1788. Bligh referred to the mountain as ‘Table Mountain’ because it reminded him of Table Mountain in the Cape Colony in South Africa. Early settlers used the name Table Mountain until 1832 when it was decided the mountain would be renamed to honour the Duke of Wellington.

During European settlement, the mountain was used as a source of clean water, timber, food, ferns, skins and seeds. Wattle, sheoak, stringy bark and blue gum were all used for building and firewood.

Between 1890 and 1910 recreational hut building on the mountain reached a peak of around 40 small huts. They were used as weekend retreats and some even homes. There are even reports a piano was housed in one small hut! Most were destroyed by bushfires. The mountain was also home to notorious bushranger Rocky Whelan who hid from authorities on the east face of the mountain. He was arrested in 1855, armed with a double-barrel pistol ready to fire. Rocky admitted to almost a dozen murders, including Magistrate Dunn, whose body was later found on the mountain.

In 1905, the first application proposal was made for an aerial tramway from Cascades to the mountain summit – which was strongly protested by the people of Hobart. In the early 1930s the Historic Exhibition Garden was built at the Springs. The gardens included over 100 rhododendron plants and the area became a popular weekend picnic spot for locals and tourists. The Pinnacle road opened in 1937. The road was built as a relief scheme for the unemployed and declared by The Mercury as a ‘triumph of engineering ingenuity over nature at its wildest’.

With the arrival of television in Australia in 1956, two towers were built on the summit of the mountain in 1959 to provide reception to southern Tasmania. In 1967, 90 per cent of Wellington Park was burnt in the Black Tuesday bushfires. Since then, there have been major bushfires in 1983, 2001 and 2013. In 1993, The Wellington Park Act passed through Parliament formalising the protection of natural, cultural, water catchment, aesthetic and tourism and recreation values on the mountain. Today, kunyani / Mt Wellington attracts 300,000 visitors a year. ■