Over The Fence With Shaun And Zac 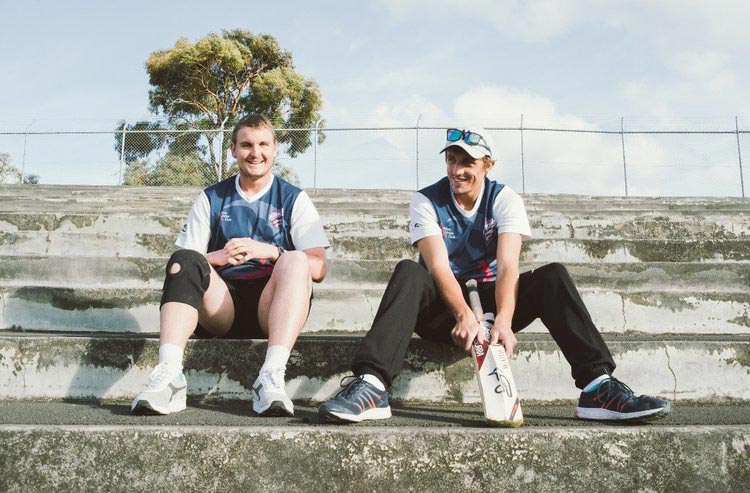 After overcoming financial and social hurdles to get the Derwent Scorpions established, they struggled to field a full team or win games. Determined to turn the team’s fortunes around, Shaun and Zac managed to recruit new teammates from Hobart’s migrant community. Director Eliya Cohen shares, “For Zac, who struggles with his mental health and Shaun, a young father, cricket gave them both a sense of purpose and a greater connection with a broader community than they had previously known.”

The film is being shown as part of an upcoming short film festival on SBS On Demand from 13-15 September. Ahead of the festival, we sat down with Zac and Shaun at their home ground to chat all things cricket.

Have you both always loved cricket?

Zac: I used to play at school. I’ve been playing for about 15 years.

Shaun: We’ve got two different stories. Zac’s been around cricket most of his life and I come from a football background. I only started playing cricket four years ago. I was getting bored being home over the summer and not doing anything, so I thought I’d try cricket.

And do you love it? I think it was you Zac in the film, you said “I think about cricket all the time”?

Shaun: I do now too. I’ve grown into it.

How did your multicultural cricket team in the Intercultural Sports League (ICSL) come about?

Shaun: We started the Derwent Scorpions cricket team about three years ago. We were looking for a competition to play in, and we just couldn’t get the funds up to play in the main comp in Hobart. To get in, you’re looking at $20,000 just to enter a team. At first, we had a team of just Australians. And then over the years, that escalated. There’s about three or four Australians at the moment and the rest are people from different countries and different cultures. They wanted a game of cricket, so we gave them one.

When the competition first started there were six teams. It’s just grown every year. Then there was nine. And now, there’s twelve. It’s just getting bigger each year. Raj Chopra runs the competition. He’s very professional and has always been so good to our team, and me personally. He’s always backed us in and given us a chance to play in this competition. When Raj reached out and gave us a go, we were really thankful that something like this had come up.

There’s lots of people moving here and Hobart’s changing quite a bit at the moment. Do you think your league helps that situation?

Shaun: Yes, it does. A lot of them love their cricket and quite a few of them, when they move to Australia or Hobart, they’ve struggled finding cricket teams to play for. I think that’s one of the reasons why Raj introduced the ICSL. He wanted to involve everyone and wanted everyone to have a fair go and just enjoy their cricket. And it’s brought everyone a lot closer. It’s a lot more competitive than what it was. But you also make a lot of mates out of it. It’s not every day that you could run out there with your mates and have a game of cricket. So, when the opportunity is there just go and enjoy it and do your best.

Did set out to bridge a cultural divide, or was your strategy of getting overseas-born players purely based on winning games?

Shaun: It was a bit of both. We did want to have some multicultural people joining our team. When I first started playing cricket, I joined an all Indian team. I started playing for the Weily Park Rockers and I was the only Aussie. I got to know them and they’re all nice fellas. I just thought that we’d try and get a few in our team.

In the film you set about recruiting new Indian and Pakistani players using a few unique methods.

Shaun: We’d done up some flyers and went around putting them on shop windows, the gym, restaurants and taxi ranks. We thought getting these overseas players in might add more motivation to the rest of the team because they love cricket so much.

Shaun: It has now, yeah. When we first started, a few of our team didn’t really know how to take the players from overseas and were wary about having them in the team. I reckon it’s brought everyone closer.

Shaun: A lot of the teams now want to win, win, win. They want to take that trophy at the end of the season.

What sort of reaction do think you’ll have down at the nets after the SBS screening?

Shaun: We’re looking forward to our story getting out. It’s going to be good to be recognised for the hard work that we’ve been doing.

While filming you we’re all living together at your place, Shaun, with your young family. Has the Hobart housing crisis affected you guys?

Shaun: Yes it has. Zac isn’t living with us at the moment now though. He does come stay with me sometimes during the week. He went through a break up and he found himself with nowhere else to go. So we said he can come and stay with us for a little bit, until he got some stuff sorted out.

What sort of work do you both do?

Shaun: I used to work at Cosgrove High School as a teacher’s assistant, with kids with special needs. Unfortunately I lost hours due to staff cut-backs. I’m not currently working and I’m just trying to find a job.

So people can keep their eye out for you on the building site for a celebrity in their midst?

Who do you both admire in the cricket game?

Zac: That would be David Warner. I would say Kumar Sangakkara from Sri Lanka until he retired. They were both my idols when I was growing up – the way they love their cricket.

Shaun: I’m a bowler, so I look up to a lot of the bowlers from Australia. I try and look at how they do it, what their routines are and work as hard as I can with that. I also like Steve Smith. Just the way he bats and the patience he has. The ability to go out there and perform each week.

Any messages for your ICSL opponents?

Zac: The Scorpions are coming this year! Now that I’m in charge. I will be captain this year. Shaun’s stepping down for a year.

When does the new season start?

Zac: We’ve got the ICSL season launch next month and the first game is usually mid-October.

Check out Sidelines, starring Zac, Shaun and the Derwent Scorpions on SBS On Demand from 13 September. ■