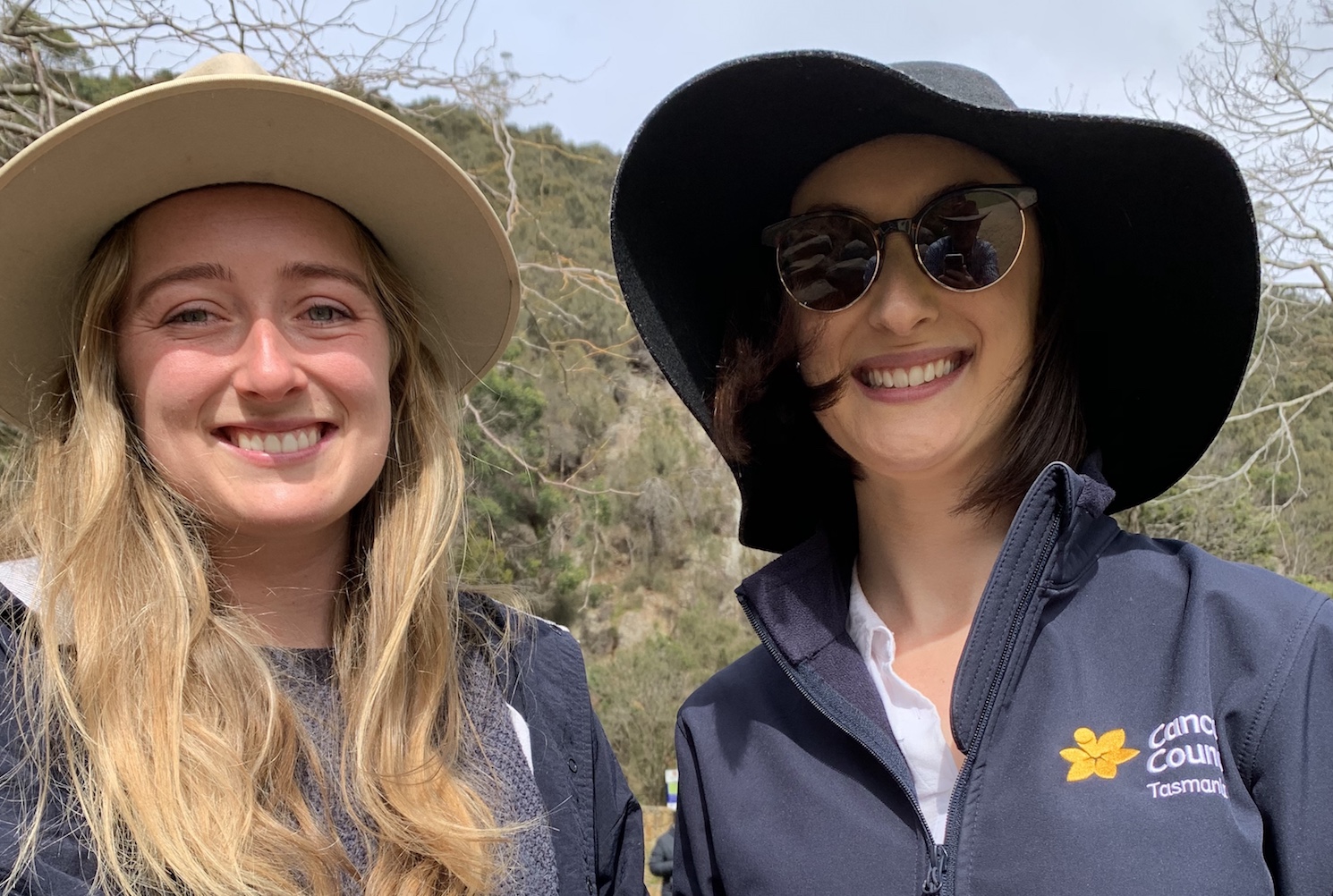 Yamashita (31 Criterion Street, Hobart) is the newest Japanese restaurant in Hobart and they’re currently offering a chef’s special eye fillet lunch set for $16 to celebrate the opening. The much anticipated opening of the Lady Hester Cake Shop on Sandy Bay Road, Battery Point is nearly upon us. We can’t wait to see what other treats Erin and Loren have in development. If you’re heading north, take a detour via Oatlands to try out The Kentish (60 High Street, Oatlands). Grab a Straight Up Roasters coffee in the bakery, or you can pull up a stool in the bar or bistro. Park Cafe (2 Pyeena Street, Dodges Ferry) has opened in the spot that was once Mullet Cafe. In a cracking locale just up from the beach, Park Cafe serves exactly what you’d want to eat after a surf or walk on the beach – egg and bacon rolls, omelette rolls, chowder, coffee and treats.

CAUGHT BETWEEN A ROCK…

This rock was recently spotted by a reader on the Hobart Rivulet near South Hobart. He was perplexed by what it could actually be…had some Roman ruins found their way down from the mountain? Had it rolled in from afar? We’re throwing it over to our readers to explain this one – what do you think this is? Email editor@thehobartmagazine.com.au with your theory.

The Festival of Dangerous Ideas is usually tricky to get to, being put on at the Opera House in Sydney. But this year COVID has allowed for those dangerous ideas to be shared virtually. From Hobart you can tune into hear one of the guest speakers – Edward Snowden is talking ‘Surveillance States on 24 September and David Wallace-Wells is talking ‘The Uninhabitable Earth’ on 11 October. Tickets are from $10 and times are AEST. www.festivalofdangerousideas.com. 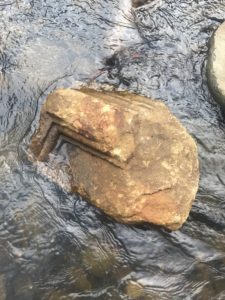 Moonah Arts Centre is back open with three new exhibitions by local artists. Toby Juliff has collaborated with the Tasmanian Aboriginal Centre and the Tasmania Fire Service to create an artwork examining an impending climate catastrophe. Catherine D’Orazio is showing her abstract watercolour paintings, which are created by layering colours over and over, in a ritualistic, contemplative process. The third exhibition is by artist Nadia Refaei. Nadia uses family photographs and other records to explore the idea of ‘homeland’ in the context of the Syrian conflict. “It’s been a really challenging time for artists,” says MAC’s visual arts program officer Rebecca Holmes. “Artists who were travelling from interstate to be involved with MAC’s program have been unable to travel, and many artists haven’t been able to access their studios or collaborate with other creatives, and have had to put projects on the back burner. We’ve been trying to support our artists by creating opportunities for them to show exhibitions, or parts of their exhibitions, online. This is something that we will continue to do as we reopen our exhibition spaces.” The exhibitions will be open Monday to Friday 10am – 5pm and Saturday 11am – 3pm. www.moonahartscentre.org.au

The 2020 SunSmart season has begun so it’s time to remember to protect yourself when you head outdoors in the coming months. Ella French, a Cancer Prevention Project Officer with Cancer Council Tasmania said sun protection is now required when the UV is 3 and above – from September to April in Tasmania. “You need to protect yourself by five measures outdoors.” In case you need a reminder, it’s best to slip on clothing that covers as much skin as possible, slop on broad spectrum, water resistant SPF30+ sunscreen, slap on a hat, seek shade from the sun wherever possible, especially between 10am and 3pm during peak UV times and slide on sunglasses. It’s hard to be vigilant but you never know when skin cancer might affect you. 24-year-old Kate Von Stieglitz has had melanomas removed in recent years. “I have spent a lot of time in the sun and became worried in 2018 about a spot on my leg, which had both grown and become darker,” Kate said. “I went to two doctors who said it was fine. But I still had an inkling it wasn’t right and went to the Launceston health hub. I had it removed and the test showed it was a malignant melanoma. Then last year I had a little freckle on my calf which got darker. It was removed with a few mils of skin and that also showed up as a melanoma. No tan is worth it,” Kate said. 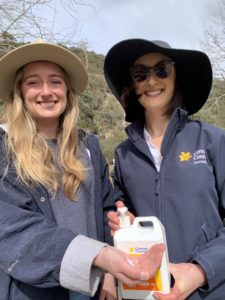 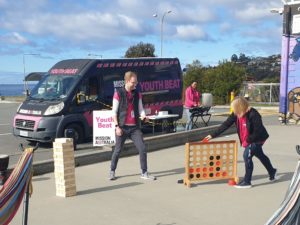 Mission Australia’s youth outreach service, Youthbeat, is expanding to increase the charity’s level of support for at-risk young people. Regularly connecting with young people across Glenorchy, Derwent Valley, Clarendon Vale and Rokeby, the Youthbeat team are expanding to Blackmans Bay, Lauderdale, Cremorne, South Arm, Dodges Ferry and Sorell. Youthbeat vans operate six days a week with professional youth workers trained to help young people with things like anti-social behaviour and drug and alcohol misuse, and link them to further support, services and social networks. Youthbeat offers interactive activities based on the needs and interests of the young people, supporting them towards positive futures.

LARGE DARKLAB ARTWORK ON ITS WAY FOR HUON VALLEY NEXT YEAR

DarkLab has announced a major new permanent artwork as part of Project X, to be positioned at Ida Bay. Transformer, a new site-specific commission by American arctic Doug Aitken, is a pavilion with a reflective interior, creating a lens consisting of angles and facets, a kaleidoscope that interacts with the landscape over the seasons. DarkLab Creative Director Leigh Carmichael said, “We are fortunate that artist Doug Aitken accepted an invitation to visit Tasmania late last year and designed the new work after identifying a site at Ida Bay. Our aim is to lodge a development application with the Huon Valley Council later this year, and pending approvals we plan to open in December 2021.” Huon Valley Council Mayor Bec Enders said, “After the loss of tourism in our region for two seasons, we welcome with open arms Doug Aitken, DarkLab and Mona to the Huon Valley. We know that one-of-a-kind ‘hero’ tourism experiences not only encourage visitors to stay longer but more businesses invest.”

THE PUNTERS ARE LAUGHING AGAIN AT JOKERS COMEDY CLUB

Are you ready for a good laugh? Jokers Comedy Club has just completed their first mini season and are back into it again with the second round of the Jokers Testing Centre. The laughs are delivered by six different comedians from 7.30pm Wednesdays, 23 and 30 September, 7 and 14 October. Seating is limited and bookings are essential. Tickets are $17.50 (including booking fee). www.jokerscomedy.com.au