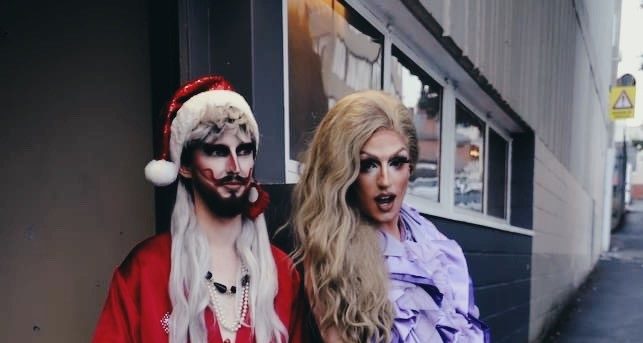 The sun hasn’t quite set as two long-legged figures stand together up a Salamanca sidestreet.

The pair are busy exchanging boisterous introductions and are greeting a rush of guests who enthusiastically walk into Society Bar in Salamanca.

Turning, the twosome flounce inside and prepare to drop the balls for Thursday night bingo.

But it’s far from a purple-rinse elderly audience – this is the magical world of gender illusions, throwing shade and lip syncing. This is drag queen bingo. 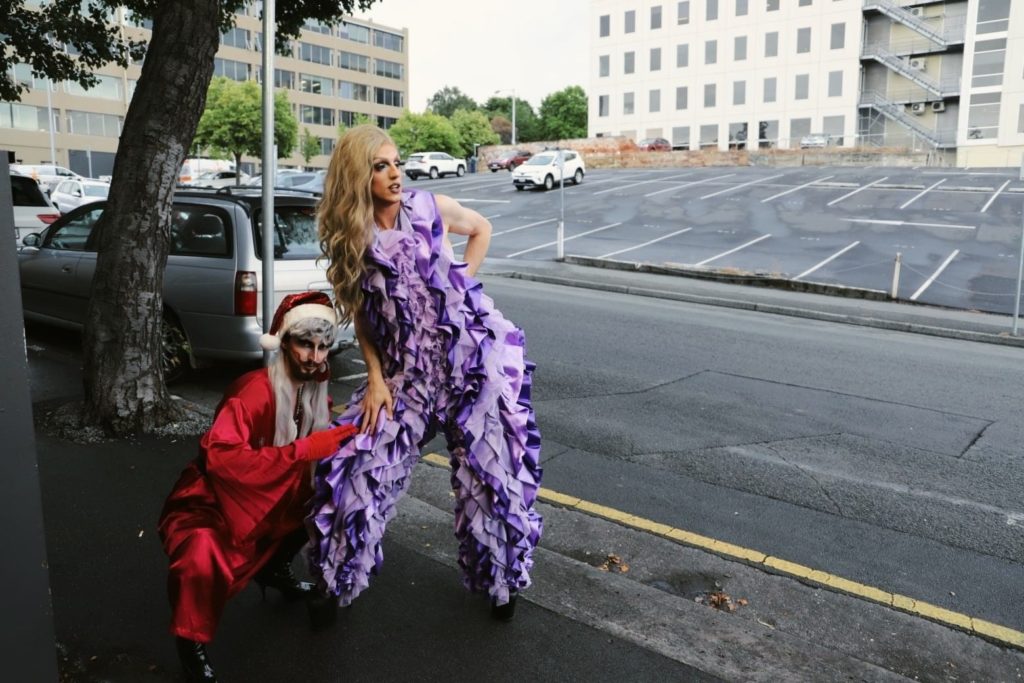 Performing drag for almost eight years, Pussay, an acute healthcare worker by day, said she first used the art form as a way to channel everything she disliked about herself into her character.

“I thought, ‘just use it as an avenue to get it out of your system’.”

When she moved to Launceston in 2013, she soon started to perform more regularly but it wasn’t until she settled in Hobart that Pussay was ‘born’.

Gravitating towards comedy, Pussay said her character was politically charged, didn’t mind being stupid, but always included the unexpected.

“Growing up gay, at a Catholic school, in a small town, you have to learn to be funny to survive,” she said.

“That’s where her quick-witted and sharp humour comes from.”

Drag and the gender myth

Co-host Ana Thema (who by day, runs a queer-friendly coffee shop) started experimenting with drag around three years ago after borrowing a housemate’s makeup.

“I had reservations [that] a drag queen was about being a woman, and I thought ‘I don’t want to dress up as a woman’,” Ana said.

A common misconception is that drag just means looking like a woman.

“Drag is about performance,” she said. 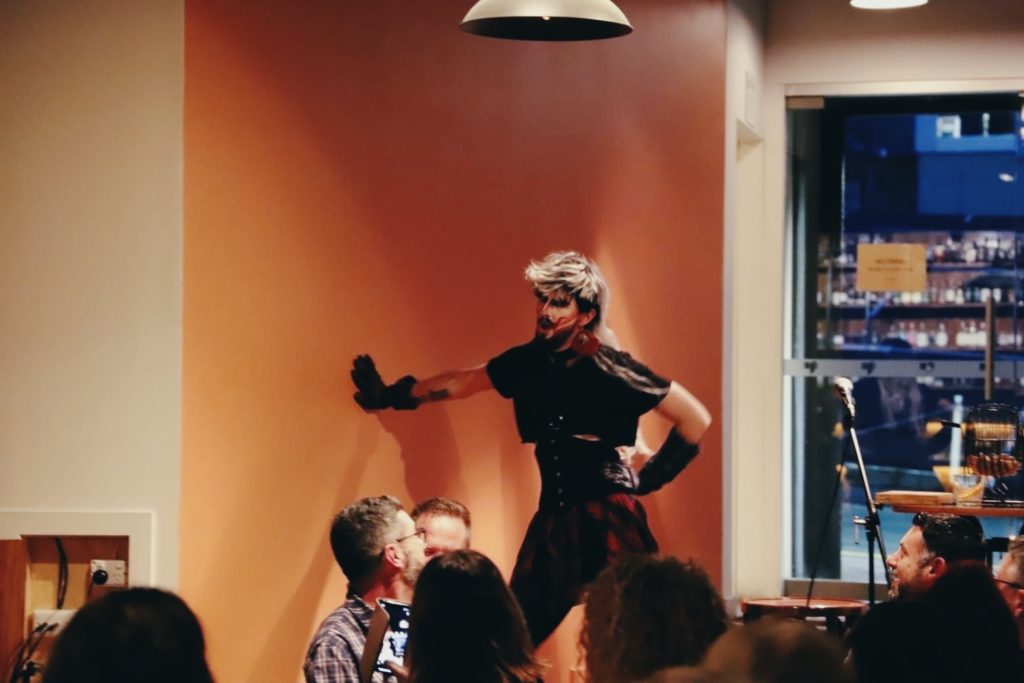 Pussay agreed, believing drag was loosely based on a gender illusion, rather than a cis-male dressing up as a cis-women.

“I mostly do female-based illusion, but what is feminine?” Pussay said.

“I see biological women who are like ‘I want to be a drag queen but I can’t because I’m a woman’ and I’m like ‘you can – anyone can’. It’s not tied to a gender.”

The library is open

While drag bingo is strictly an over-18 event, Pussay took her PG-friendly character Miss Poppins to the stage when she participated in Drag Story Time in Ulverstone.

“I was very nervous – Ulverstone, in drag, in the daylight,” she said.

But Miss Poppins said the experience was “amazing” and provided her with an opportunity to connect with younger members of the community.

“They were coming up and shaking, saying ‘we’ve never seen a drag queen before,” she said. 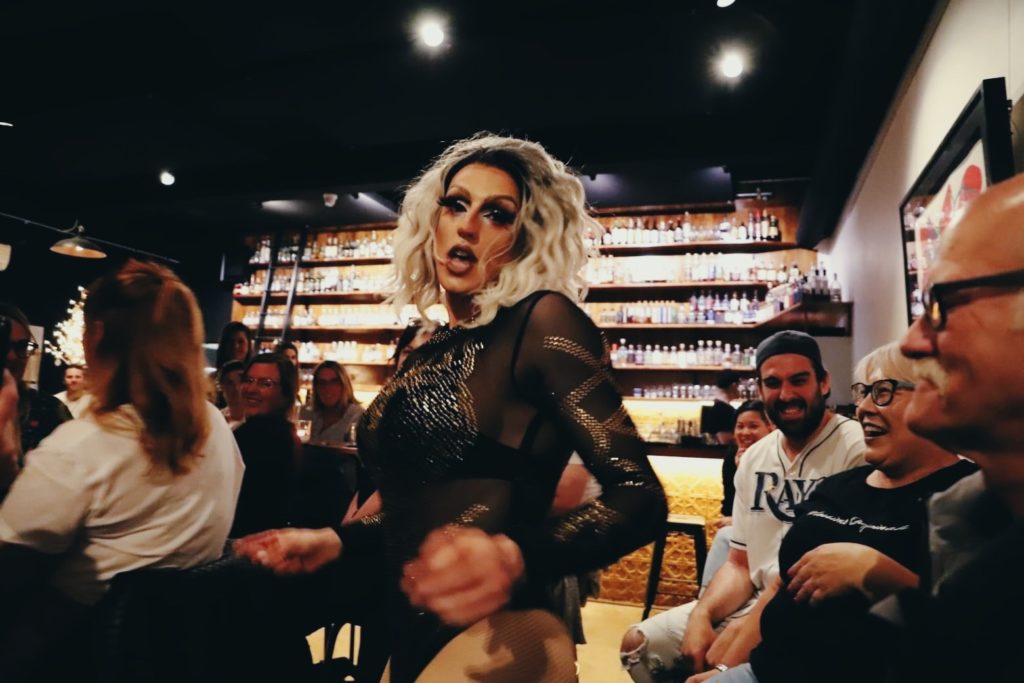 Ana said there was a sense of family and community among drag performers living in Hobart.

“Because we’re so small, we want to keep each other happy and help each other.”

While she felt “parts of” Tasmania were accepting, Ana said could go anywhere in Hobart and feel comfortable.

“I remember going to Maccas in drag, and they’re just loving it,” she said.

“They’re like ‘you look awesome, let’s take a photo’.

“We get a time that we can just be ourselves and really put ourselves out there and let people know that we’ve been here for ages.” 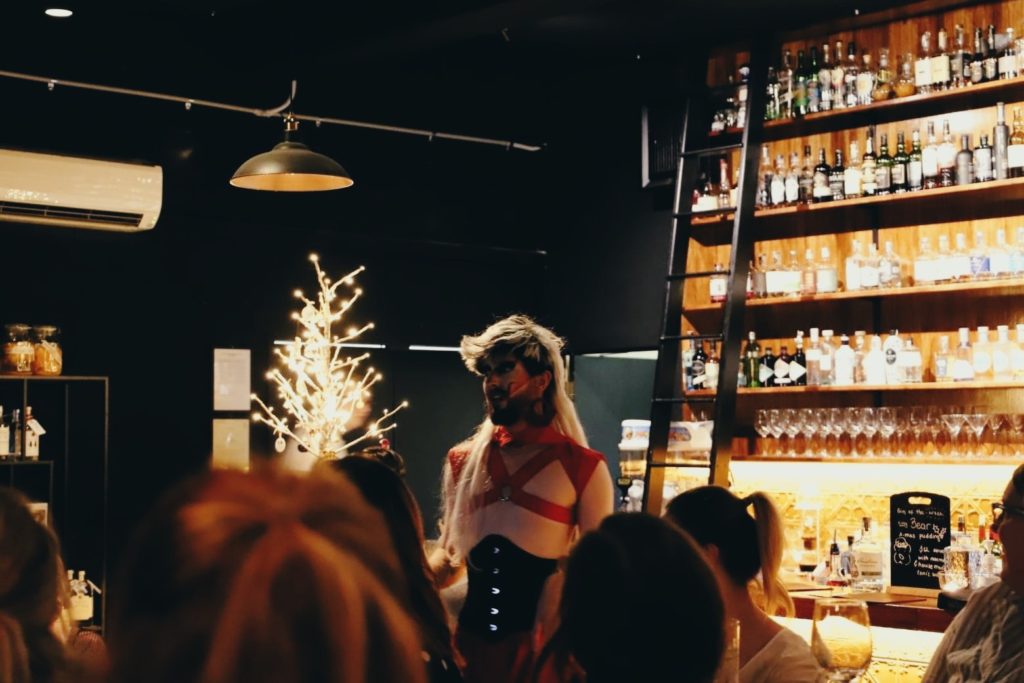 And just what can you expect at drag bingo?

“Ana Thema and I are both very creative in different aspects,” she said. “But I’m funnier,” she joked. 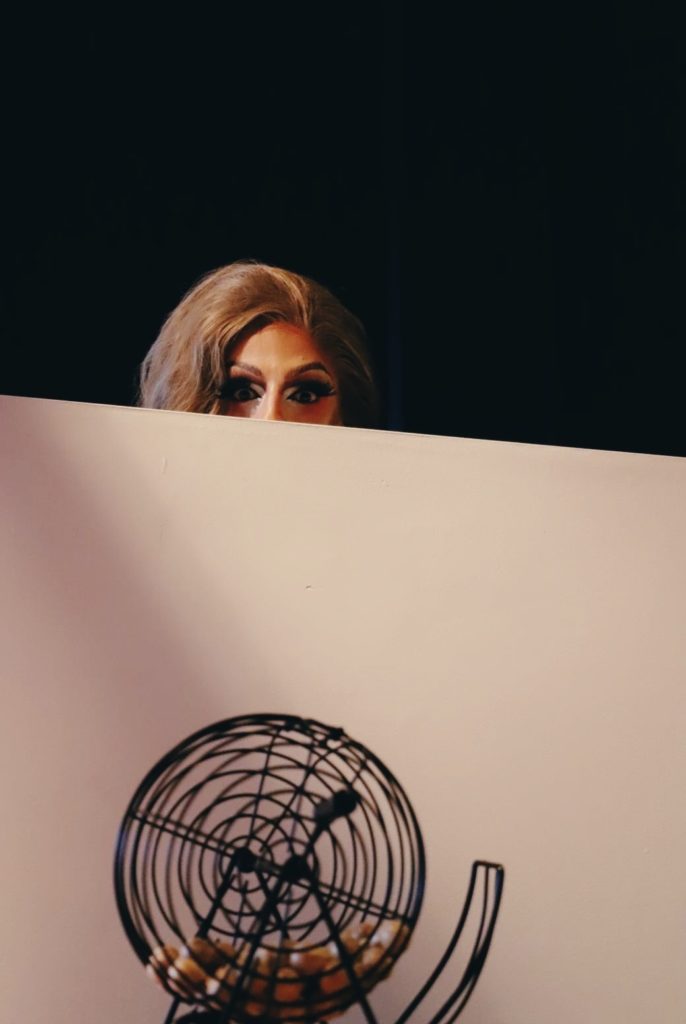 The balls have dropped

Inside the bar at Salamanca, the crowd is gagging.

Catcalls come from the audience as Ana Thema and Pussay Poppins make their rounds.

It’s a place where all are welcome.

And where everyone wants to return.

Ana said it felt great to be hosting drag bingo so close to where activist Rodney Croome fought for gay rights.

“We’re reclaiming a space that was full of hatred, a place of oppression,” she said.

“It’s nice to know that people from all walks of life are just having fun around a queer space.”

Rodney Croome on Tassie’s Darker Past

Drag performers and bingo hosts Ana Thema and Pussay Poppins invite the audience to share snaps from the night on social media.

But not so long ago, events like these would be hidden.

LGBTQI+ activist Rodney Croome, who successfully campaigned against Tasmania’s homosexuality laws, said community spaces had been around since at least the 60s.

In the 70s, the back bar of The Hadley Hotel was one of these places.

“It was [the bar] furthest from the street,” he said.

Lawyers would often drink in the front bar, closer to the street.

“They were a form of protection in case the police decided to raid,” Rodney said.

Each event brought its own set of risks.

When Rodney attended his first Gay University Students Tasmania Organisation event he was cautioned not to park too close, in case someone wrote down his registration number.

“I was warned not to use a second name, and not to ask people theirs in case they were police informers,” he said.

He said that although most Australians felt like they lived in a democracy, being gay in Tasmania was like living in a police state.

The penalty for sex between two men was one of the harshest in the western world. Rodney said community attitudes had changed, but there was still work to be done.

“While it’s true that Tasmania has gone from worst to the best in a really short period, I don’t want anyone to feel that it’s cause for complacency,” he said.

“There is still prejudice in parts of the community and discrimination. I, and the people I work with, remain committed to foster an ever-inclusive community for the LGBTQI+ community.”

Rodney said this meant banning the use of conversion practices.

“To be told that our sexual identity or gender identity is broken or could be fixed is the height of cruelty,” he said.

“We’ve already set really high standards, and on conversion practices, it will be the same.”‘