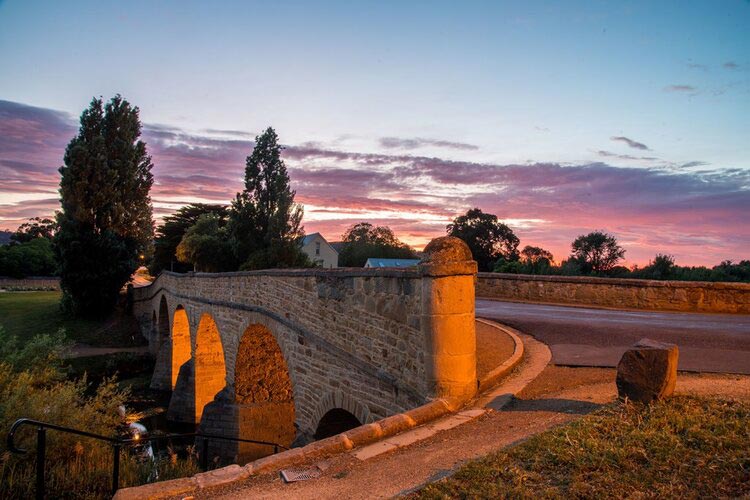 When visitors stop to gaze at picturesque Richmond Bridge they might not imagine a history of whippings and murder.

Australia’s oldest sandstone bridge has a chilling past. In 1832 a notoriously cruel employee from the Richmond Gaol, George Grover, was pushed off the bridge and fell seven metres to his death. Grover hade been involved in a fight earlier in the night and drunkenly fell asleep on top of the bridge.

No one was ever convicted of his murder.

Grover was well known for whipping convicts as they carried sandstone to the bridge site and one of his duties at the jail was flogging prisoners.

It’s a story etched in the bridge’s history at a time when Richmond was emerging as an important crossing point for settlers travelling between Hobart and the Tasman Peninsula.

The road to Richmond from Hobart was also underway in 1820 and the necessity for the bridge became clear.

It was a time of frequent flooding at the crossing, delaying wagons and risking stock and carts being washed away.

The foundation stone for the Richmond Bridge was laid in 1823 and the bridge was originally named Bigge’s Bridge after Royal Commissioner John Bigge – who first recognised the need for the bridge in 1820.

The arched design was a significant technical achievement and, for a decade, it had the longest span of any bridge in Australia.

The sandstone was quarried from Butcher’s Hill and hauled to the bridge site by convicts using hand carts. The bridge was completed in 1825.

By 1835, Richmond was Tasmania’s third largest town and was considered an important military outpost and convict station.

The town soon became a stopping point for travellers moving between Hobart and Port Arthur.

In 2005, the Richmond Bridge was added to the Australian National Heritage List and its popularity has grown. It now attracts 200,000 visitors a year. ■