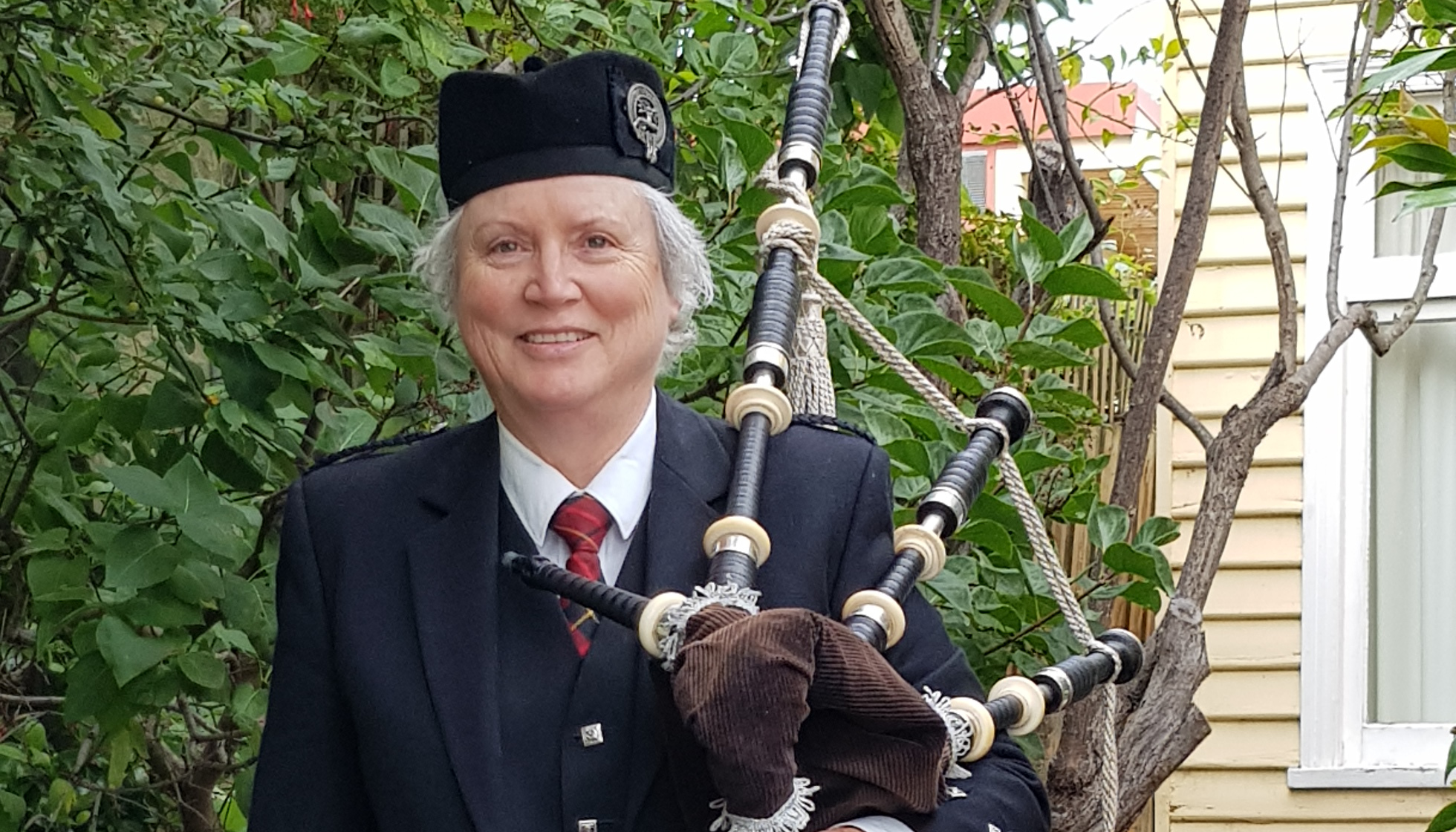 Where in Hobart do you live? I now live in New Town. My parents were teachers and moved around a lot, so I grew up in different places like Levendale, Dunalley, Lenah Valley and Strathgordon. After our wedding, my husband Paddy and I bought a house in New Town but wanted to bring up the kids in the country, so Paddy got a job in Wynyard. We lived in Sisters Creek on the North-West coast for 23 years. When we retired we decided to move back to the house in New Town.

Why did you take up the bagpipes? I started playing the pipes at the age of 12. I attended The Friends’ School, and my friends were in the pipe band and took me along. My grandfather was Scottish, so I was quite interested in the pipes anyway.

You generously teach others for free. Why? There’s a culture in pipe bands that you learn to play for free, like I did. Then you give something back by teaching the next group. There are three of us in the band who are currently tutoring for free. All the equipment is on loan, and we supply all the clothes – kilts, jackets, shoes, everything. All people need is a real desire to learn and be aware that it’s a lot of work. We’re actually looking for band members right now for our bass drum, tenor drum, side drum, and of course, the pipes. We’re happy to teach novices, but if someone already knows how to play, please come and join our band! We currently have seven pipers, four to five side drummers, but only one bass drummer and one tenor drummer. Most pipe bands around the world struggle a little bit with finding enough players. Due to COVID, many competi­tions were cancelled. The last Tattoo in Scotland was held in 2019.

What do first-time learners of bagpipes need to know? There are three drones [cylindrical tubes extending from the bag], and one chanter [a tube similar to a recorder consisting of finger holes], so you have four reeds to keep on top of, and you have to make sure they stay supple and airtight. You learn on a practice chanter to start with. There are only nine notes on the scale, so there are lots of very quick movements you can do to make things more interesting. It takes a little while to master those. Once you’ve got a few tunes under your belt, you can start on the actual bagpipes and that’s another huge challenge – just being able to blow it up and keep the sound going! I have one learner at the moment who is doing really well. She has been learning for eight months and putting a lot of effort into it, and she now already plays the bagpipes, which is really quick. She still does find it a bit challenging to get a sound out of the pipes. You need to be quite strong, but it’s mostly a matter of perseverance.

What is your favourite type of music to play? I love slow airs because they tend to have a lot of feeling. I particularly like ‘Loch Broom Bay’ and ‘For Ireland I’d Not Tell Her Name’. For a really lovely brighter tune, I love the hornpipe, ‘Helen Black of Inveran’. Bagpipes are very emotive and tug at your feelings. They are very challenging and take a while to learn and a long, long time to master, but you grow to love them. I think you either love the bagpipes or you don’t, I don’t think there’s any middle ground!

Where can readers hear you play this ANZAC day? Our two Anzac Day parades will take place at 6am at Kingston Beach for the dawn service and 9am at the Lenah Valley Cenotaph near the Lenah Valley RSL Club.