I’m Dreaming Of The West Coast 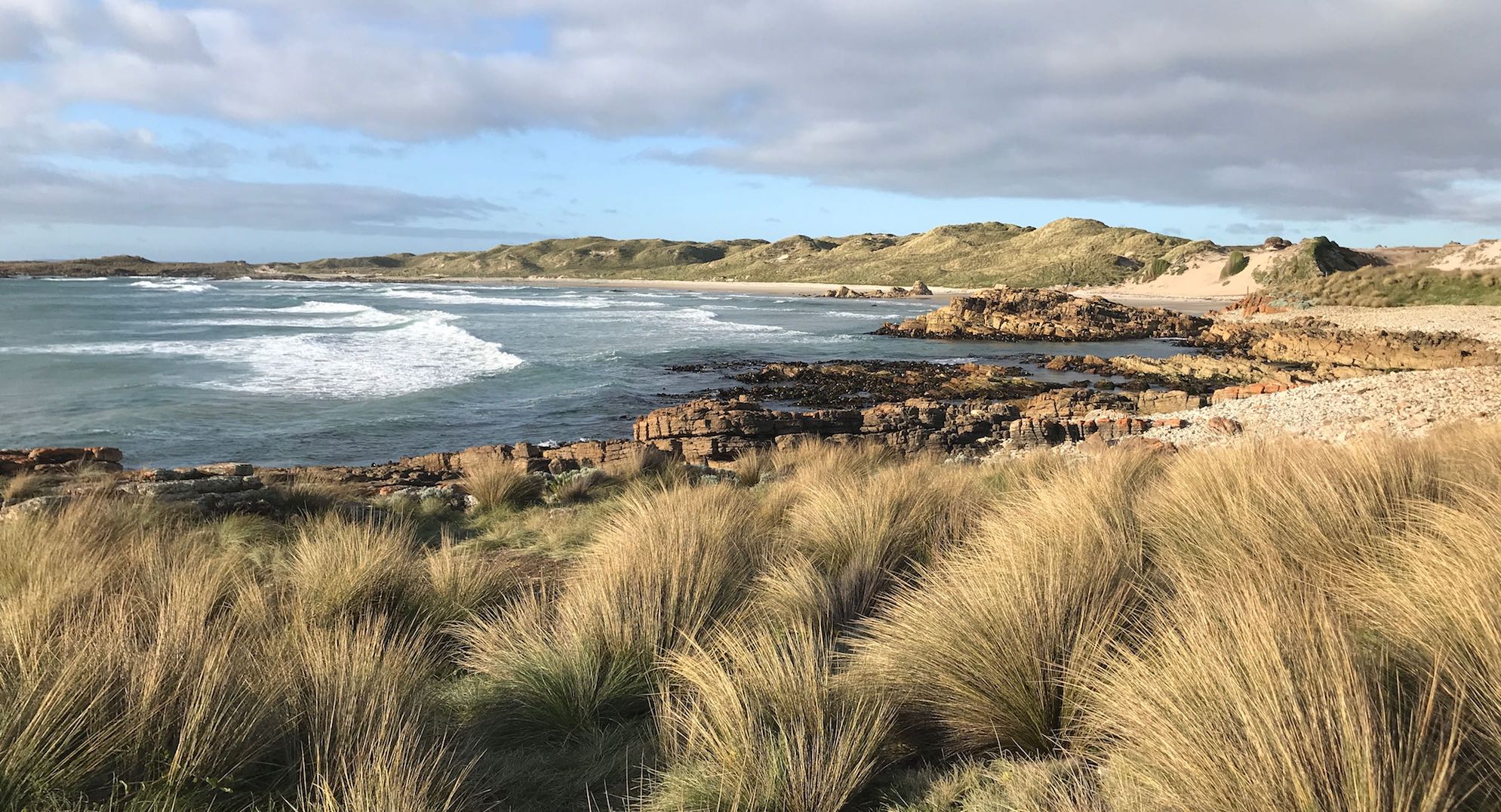 “So we’re going for a drive in our house?” my six-year-old asks when I announce we’re taking a motorhome trip in the school holidays. “Kind of,” I reply. “You get to sit in the kitchen while Mum and Dad drive the whole house along.” Lots of laughter and questions flow and it’s obvious that the kids are going to love it. I’m a little apprehensive, I’ll be honest. The practical side of eating, driving, sleeping presents more questions than answers, but in this weird year I’ve learnt that you just have to go with it.

After a bit of research we settle on a Maui six-berth motorhome (a Mercedes, under a year old) and to head north to Devonport and explore the north west and Tarkine region over a week. It’s suggested we go no longer than 2-3 days freedom camping (staying away from power and water) in order to keep the vehicle charged up, so we book in a couple of key stops at caravan parks and then decide to wing it for the rest.

The van pick up was easy – we had a briefing on how to use the loo, the water, the switches, the beds and then we were on our way. Rather than take all our gear to the van, we decided to head home and pack. When we finally set off, we got about 500 metres from home and stopped at the lights. A lady in the car next door motioned to wind down the window.

“Enjoying your holiday?” she yells out nervously. Realising we have Victorian number plates, while they’re in the thick of lockdown and she’s asking with a level of fear that we’re COVID infected outsiders, I yell back “We’re from here, and we’ve only just begun. Ask us in a week!”. Relieved, she waves us on our way as the lights change.

Our first stop is at Oatlands for coffee and a play at a brand new (and epic!) park, opened only days earlier. We back the van into the carpark where I enjoy a cosy cup of tea from the comfy couch, while watching the kids play in the cold outside. This is gold. 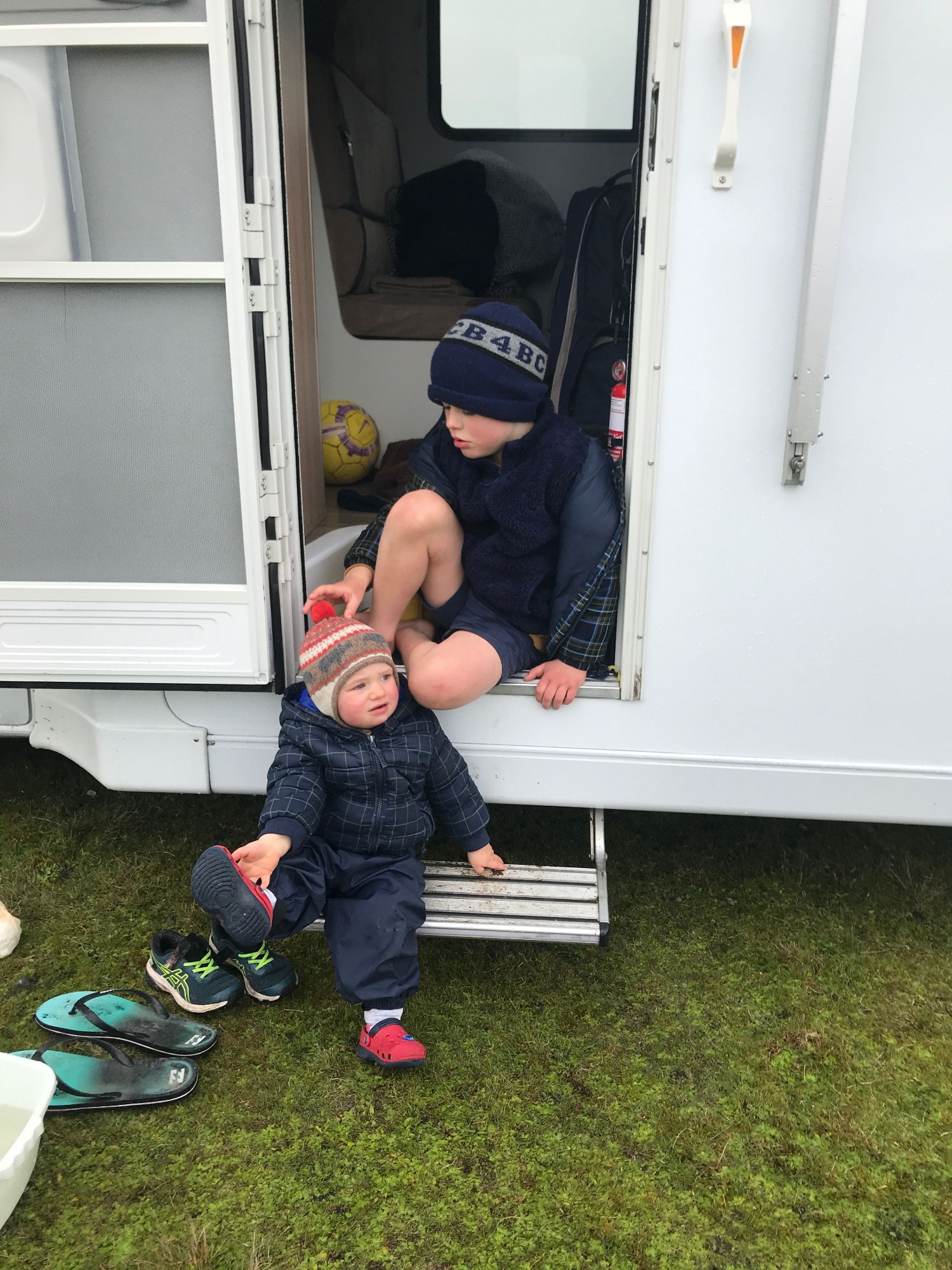 I’d been warned by friends that motorhomes can be slow going and difficult to handle, but the Mercedes felt safe from the outset and easy to drive. We made it to Devonport by a respectable time and set up camp with direct views over The Bluff Beach. You literally couldn’t get a better spot to wake up to the sunrise. After enjoying our cereal watching the waves and walking up to the lighthouse, we get on our way to Arthur River, the next stop.

Near Penguin we pass a slow-moving train that’s snaking along the coast road. We pull over on Main Road and watch as it thunders past, a metre from us. Incredible! Then enjoy bakery fare at the big Penguin statue. The late afternoon is spent exploring the beaches and rockpools of Marrawah, heading back to the comfort of the van for toilet breaks and snacks. After checking in at the deserted, but super clean Arthur River Cabin Park, we cook up spaghetti and retire early. Our bedtime becomes earlier each night as we get into the rhythm of things. 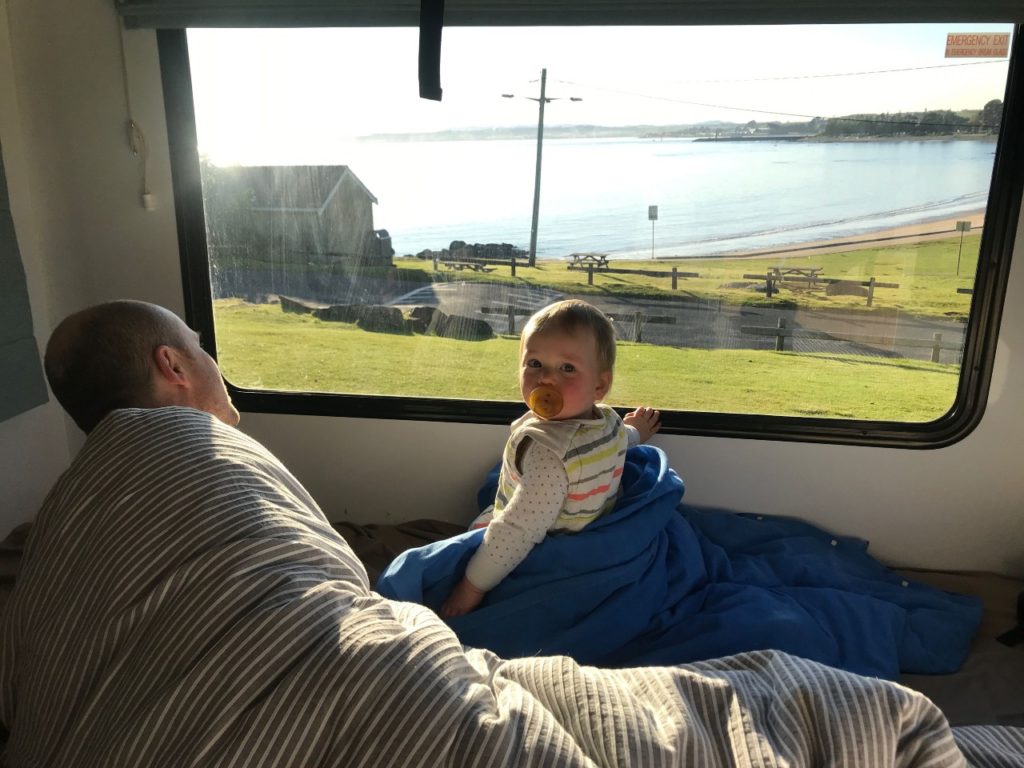 In the morning, a trip to the local National Parks and Wildlife Office nets a treasure trove of information and the kids pick up a ‘poo flip chart’ which allows us to identify the different stools in the area (fun!). After a surf check at West Point Reserve, where we enjoyed watching skilled surfers navigate the local break, we drive south of Arthur River to Nelson Bay to find the Aboriginal carvings (or petroglyphs as they’re sometimes called) that the ranger told us about. This is one of Australia’s richest Aboriginal cultural heritage areas. There’s a handful of simple shacks and the largest midden I’ve ever seen at the start of the track. From there we walk around beautiful beach coves to find the petroglyphs. Dating back between three and eight thousand years, the individual carvings are hard to find but very well worth it. There’s a special energy in this place and we all feel it. So much so, we spend the next two nights here, freedom camping at the National Parks campsite across from the beach. Our first night is blissful and quiet, but then on the second, we experience a wild and windy West Coast night, copping the full brunt of the weather in the rocking van. I Google search “can a wind gust upend a campervan?” and the answer is yes, but it takes a hell of a lot, which is a
relief. 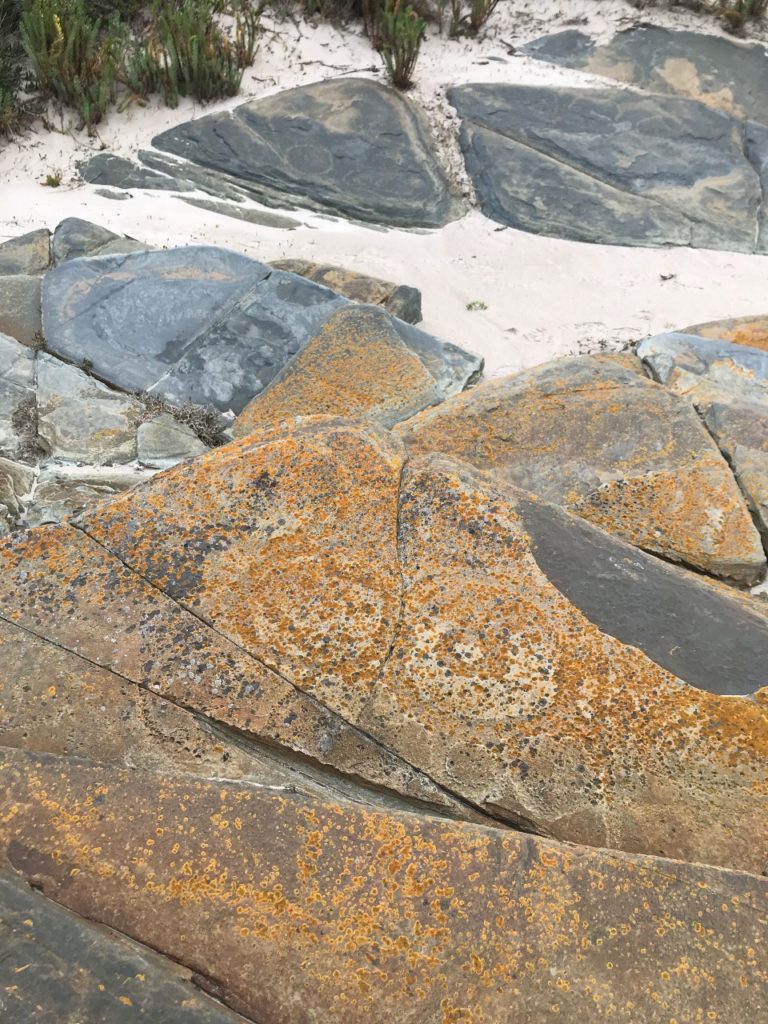 We say goodbye to our Nelson Bay digs and join the Tarkine Loop. The Tarkine (or takayna) is Australia’s largest temperate rainforest, and second-largest in the world. Its significance is clear – it’s a living example of one of the most primitive vegetation formations on earth, dating back a mind-blowing 65 million years to when we were part of the ancient supercontinent Gondwana. You’ll also find some of the best-preserved plant fossil sites in the world, and magnesite karst systems of caves and pinnacles considered internationally very rare. It’s so important that there’s a fight on to save this region from deforestation and mining – even the adventure gear brand Patagonia has gotten on board, supporting the campaign to protect it, as has Australian rugby union player David Pocock, who’s hoping to help the Tarkine become a National Park. 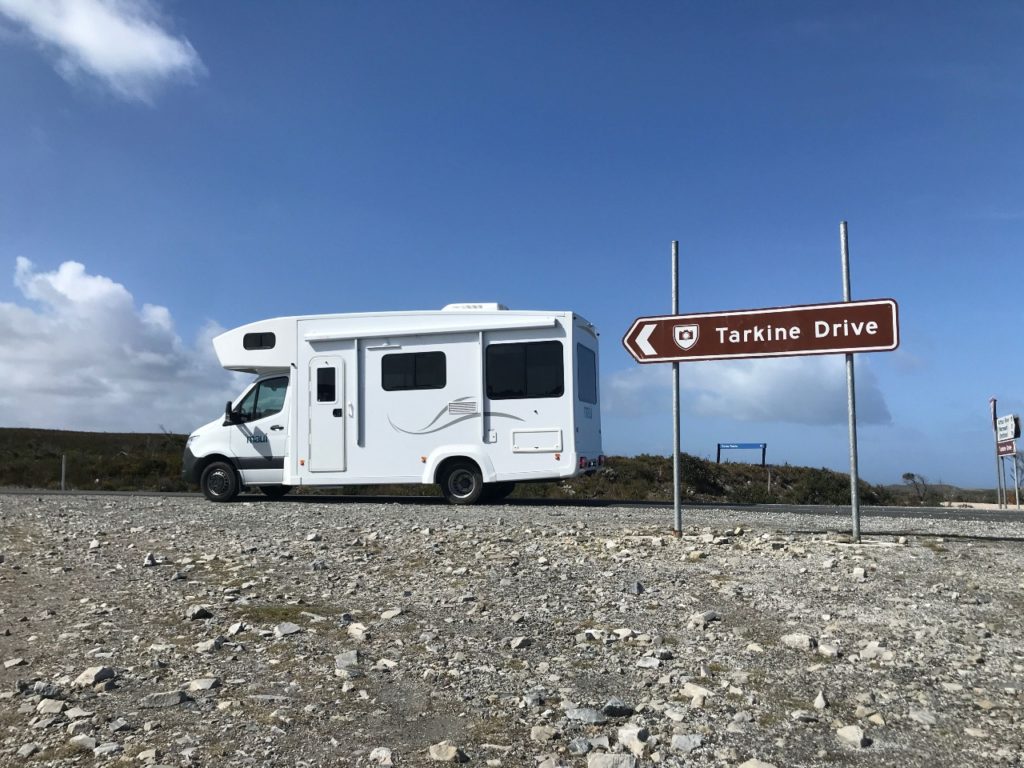 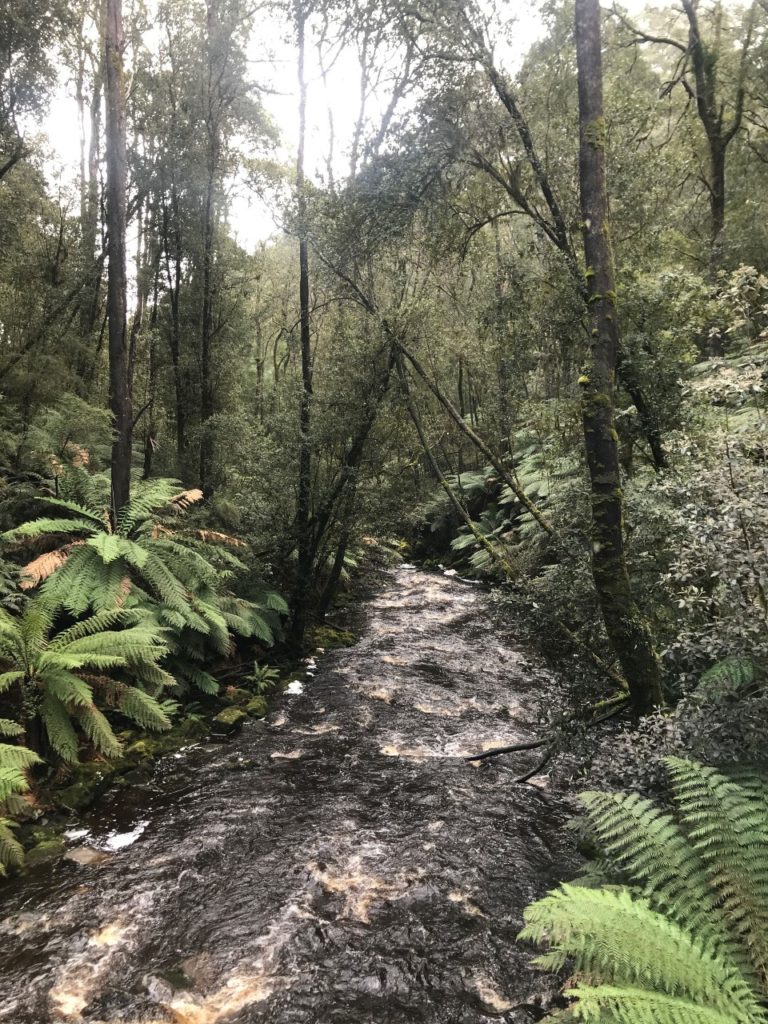 We stop at Sumac Falls for the views (and lunch in the van overlooking them!) and at Julius River we hop out and skim stones and watch the fast-flowing water. The Sinkhole is practically on the road – an inky black pool with almost sculptural deceased trees rising up from it. Milkshakes Hill was affected by fire in 2016, so there’s not as much to see, but the towering manferns were memorable. Finally we get to Trowutta Arch and it feels like this is what the whole Tarkine must have been like before deforestation began – manferns galore, mossy understory and lots of fungi to spot. The 30-minute walk culminates in the arch, a geological wonder formed from caves created millions of years ago, that collapsed into two sinkholes – one now filled with earth and one with neon green water.

Tonight, we stay at the Stanley Caravan park and enjoy burgers and Tassie bubbles in the van watching the sunset, and breakfast in the morning at the base of the Nut while the kids play. Today we wind back through the North West to Devonport, via the Table Cape tulips, which are in full bloom and the Thistle Cafe for one of their famous slow-cooked lamb rolls. After a detour to the raging Dip Falls, our final night is at the Bluff again, watching our kids play as the sun sets. The value of being able to “park and play” is worth this style of travel alone, as is having all the things you need easily accessible. 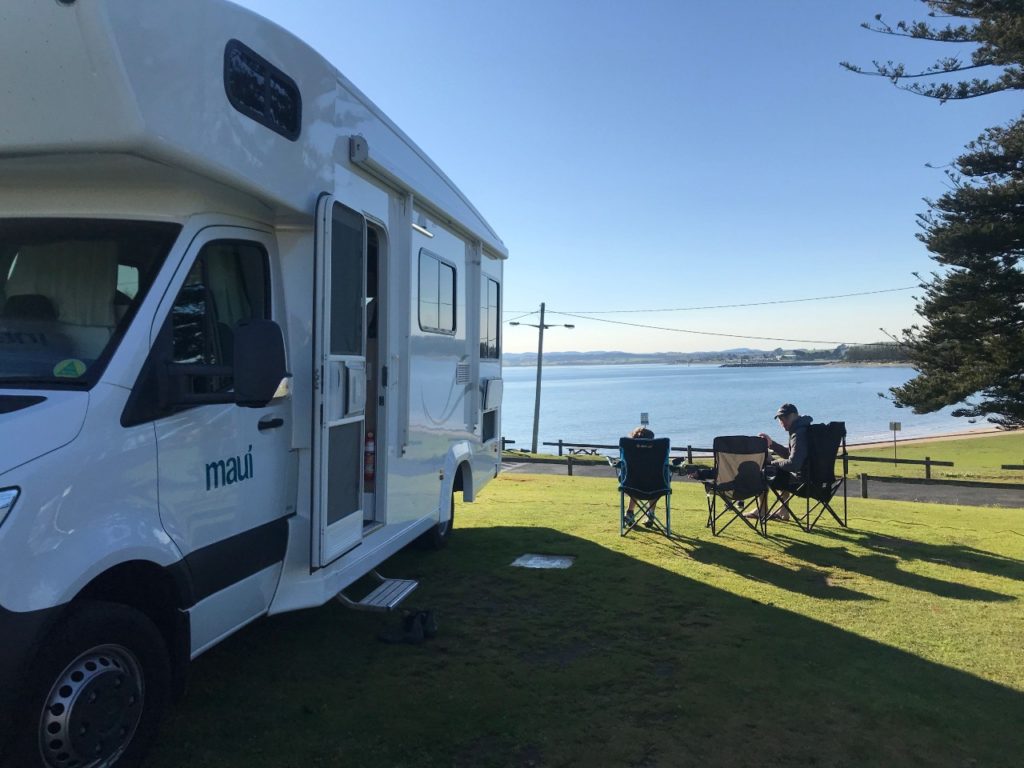 The writer was a guest of Maui Australia.