Giant Forests In The Sea 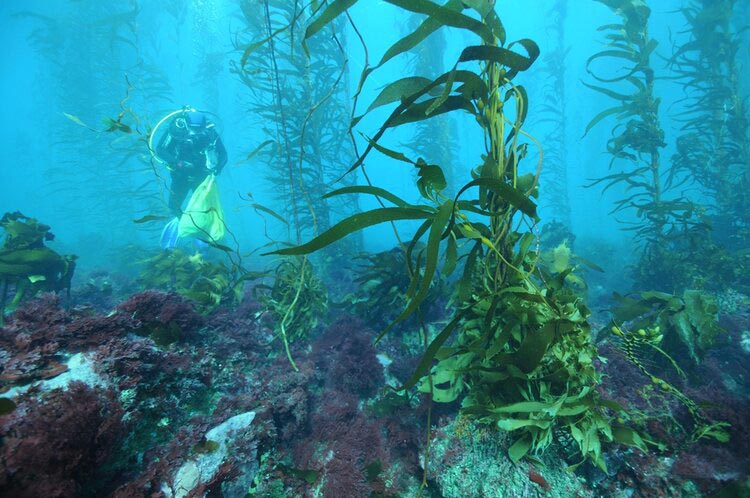 Tall stalks tower above you, rising over 30 metres from the ground. Light filters through the canopy, softly illuminating a diverse and complex understory. The leaves sway gently, providing cover for a huge variety of species. You sense movement from the corner of your eye, and suddenly come face to face with a giant cuttlefish!

That’s because this forest you’re in is a giant kelp forest, home to abalone, cray, and weedy seadragons. You’re diving in one of the last remaining stands of giant kelp in Tasmania; indeed, in all of Australia. Giant kelp once blanketed nearly the entire east coast of Tasmania, as well as parts of Victoria and South Australia, but over the past 30 years nearly 95% of it has died off. Now only isolated patches of habitat survive.

This die off is not only a problem for the kelp itself, but also for the ecosystem it supports. Like coral reefs, kelp provides structure, protection, and food for a huge number of species, including many that are commercially important for Tasmania’s economy.

“Light coming through a giant kelp forest kind of reminds me of a cathedral, and the light coming in through stained glass. It’s about as religious as I get.” – Cayne Layton

So…what happened to cause such a precipitous decline? To find out, I spoke with Dr. Cayne Layton, a postdoctoral fellow at UTAS’s Institute for Marine and Antarctic Studies (IMAS). Cayne, originally from New South Wales, moved to Hobart specifically to study kelp for his PhD. He told me that the problem began, unsurprisingly, with us humans. One of the lesser known effects of climate change is that it alters normal ocean circulation patterns. Here in Tasmania, the main impact is that the East Australian Current (EAC) has strengthened and extended southward, bringing warm, nutrient poor waters from the north, and displacing the cool, nutrient rich waters that the kelp depend on. But that’s not all. Riding in the waters of the EAC was a particularly nasty larvae – that of the long spined sea urchin, otherwise known as Centrostephanus. These urchins thrive on kelp, and can eat so much of it that they create what is known as “urchin barrens.” These are essentially bare, nearly lifeless zones, where the kelp are entirely grazed out, and it is almost impossible for them to re-colonize. The double whammy of the warm waters and the urchins decimated not only the giant kelp, but also the common kelp (albeit to a lesser extent), a smaller but equally important species.

Now, this all sounds like a very, very bad state of affairs for the kelp, as well as for the extremely lucrative cray and abalone fisheries which depend on them. And when I say lucrative, I mean about $850million per year lucrative! That’s not to mention the other ecosystem services kelp provides, such as protecting the coasts from erosion. So, Cayne and the rest of the team he works with have launched an ambitious project to help the kelp recover.

The idea is pretty simple. Those surviving stands of giant kelp? Well, there is something unique about them genetically, which has enabled them to survive the warmer EAC waters. So, Cayne is collecting their spores, breeding them in the lab, testing them to find the ones that are most heat tolerant (the super kelp!), and then transplanting them into the wild. Of course, the heat is only half of the problem. Other researchers at IMAS are working to develop a sea urchin fishery, so that the pest becomes a resource. The team is even involved in development of a robotic “Urchin Terminator,” an autonomous underwater vehicle designed to kill the urchins. They plan to begin planting out 10m x 10m test patches near Bruny and the Tasman Peninsula in the very near future, so watch this space! And, if you can find one of those remaining stands of giant kelp, do yourself a favour and have a snorkel. You surely won’t regret it.

This article is part of a series featuring early career researchers; scientists in the beginning phase of their careers. imas.utas.eau.au/kelprestoration