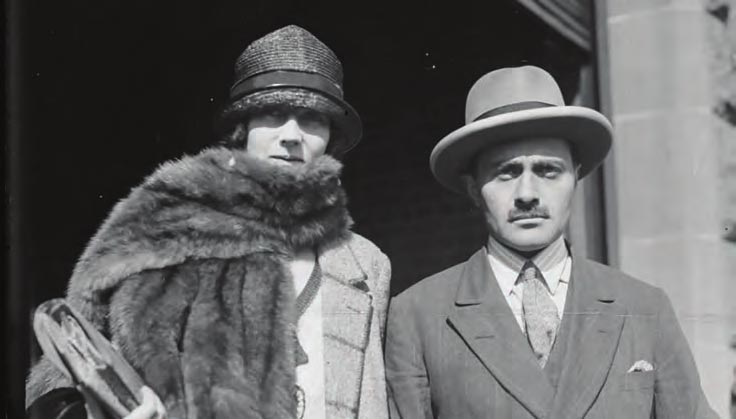 We all know that Princess Mary is Hobart’s own princess, but many might not be aware that there was a Tasmanian princess long before Mary hit the headlines. The youngest of ten children, Pauline Curran was born in 1893 in Hobart and educated at St Michael’s Collegiate. The founder of the Tattersall’s lottery, George Adams, was a close family friend and when he died in 1905, he left the family a chunk of money.

During the first world war, Pauline and her family lived at Eaglehawk Neck where she cared for her father, whose health was deteriorating. He passed away in 1921 and his estate was left in trust to support his wife and Pauline, until she was married. When her mother passed away too, the estate was split between the children.

Like lots of young Australians, Pauline decided to give London society a nudge and headed to England in 1924. It was here that she met Prince Maximilian Melikoff – she was an aging spinster (according to the times!) and he was an impoverished Russian aristocrat. Interestingly he was working as a chauffeur at the time, after leaving a career in the military fighting the Bolsheviks to join his parents in France. It was a pretty good arrangement for both parties, she brought the money and he brought the title!

Move over Harry and Megan, Pauline and her prince were engaged after three months and wed at St David’s Cathedral on Murray Street in 1926 – our very own royal wedding right here in Tasmania! By all accounts Hobartians of the time treated them like royalty, lining the streets to watch the procession. After a few months spent in Hobart, they moved to Cannes to start their married life together.

While not much is known of her life during WWII, Pauline and her prince spent considerable time in London (she had a lovely pad in Mayfair) until his passing in 1950. After his death she made numerous trips back to Tasmania, which always held a place in her heart.

When she passed away in 1988 in London, Pauline had two wills – one in Britain and one in Australia. The British will left the bulk of her UK fortune derived in London to Greenpeace and the Australian will set up the Princess Melikoff Trust Fund with proceeds given to the St Ann’s Homes for the Aged and the Tasmanian Government Wildlife Protection Services to assist in protecting marine mammals, which it continues to fund today.