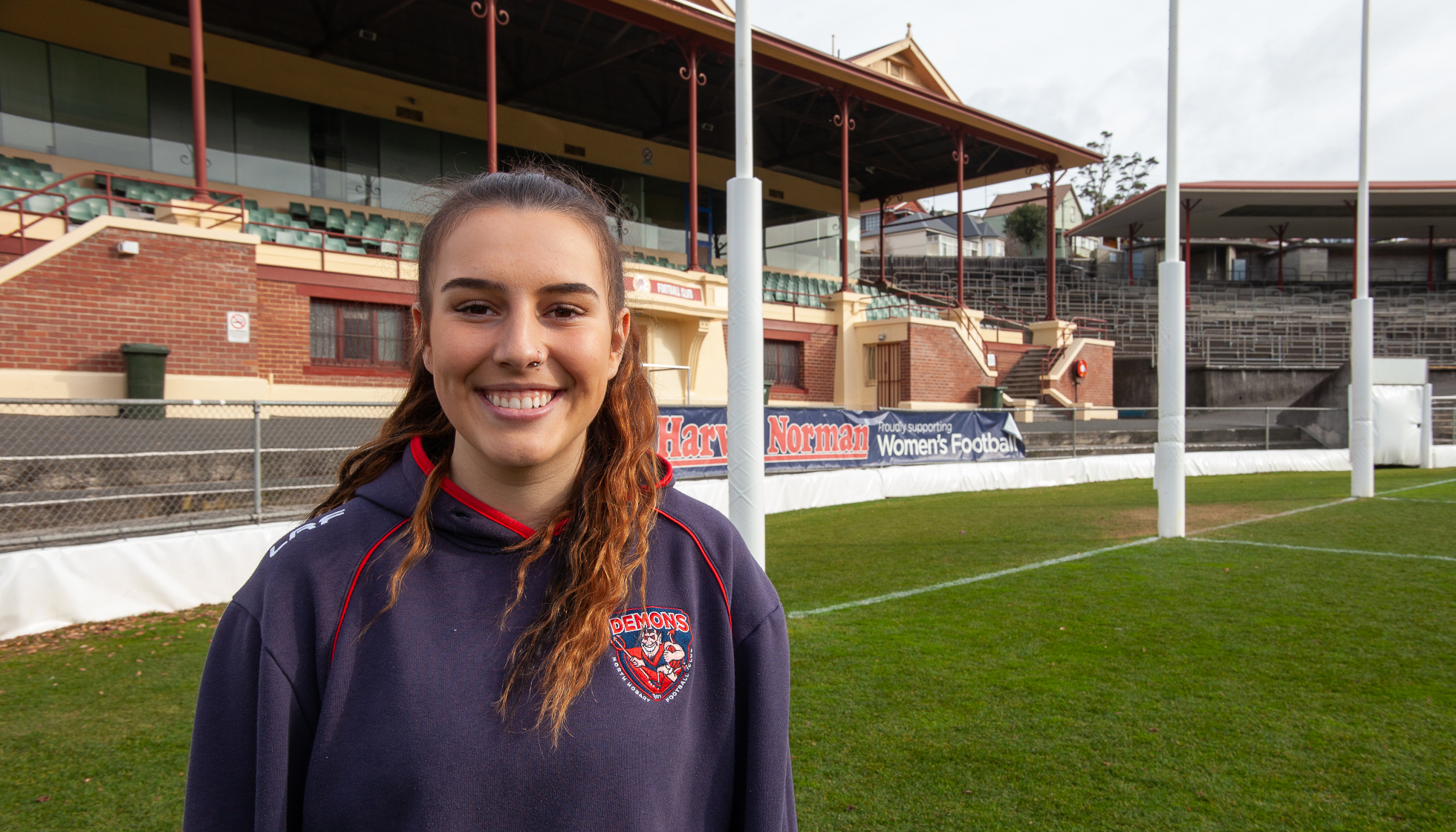 Libby laughs when she says that Sundays are generally a write-off for her.

That’s because she dedicates that time to coaching young women in the Sandy Bay Junior Football Club (under 17s) as well as Auskick, a program run by the North Hobart Football Club. She’s there on the sidelines every Sunday, yelling out instruc­tions and encouragement for her teams as they compete in league games. And not only that, on other nights during the week, you’ll find Libby coaching 40 girls in training sessions, or playing with her own team, or perhaps organising a fundraising event for the clubs. In all, she clocks up, on average, an impressive six hours a week to the sport.

But she doesn’t see it as a sacrifice. Instead, Libby Johnstone, 22, says it is a privilege to be a role model to these young wom­en. “What I get out of volunteering is a connection to grassroots footy and a sense of community. Volunteering allows me to connect to the junior footy community and help make it a better place. Even helping out with the smallest tasks can make a real difference to the lives of some kids.

“I think it’s important to remember that for these girls it can be more than a game. For some it’s the social aspect, for some they want to make it a career, and some girls just play because they love it, and it gives them a sense of family and community.”

Libby says she was spurred on to put up her hand for coaching when she noticed there was a massive drop-off in girls moving from junior footy to senior footy. “I set myself a goal of helping bridge the gap between the two, to help younger girls prepare for the senior footy environment. I loved being a part of my own football team and wanted to be able to create a similar tight knit environment to reduce some of the pressure of moving from junior to senior football. By having someone coach them who is also playing the game and has made the move themselves in recent years, shows them that it is attainable.”

According to Libby, women’s footy in Tassie is growing mas­sively at the moment, with 18 existing senior women’s teams and more likely to be set up next year. “It’s pretty empowering – it’s great to see young girls getting out there and doing that sort of thing, because I definitely didn’t do that when I was their age.

Girls didn’t really play football. But now they can see females at the top level and can strive for that.” For her, the rewards are im­mense. “If I can even provide the smallest helping hand to keep girls interested in doing sport, exercising or doing something that makes them happy, I’ve done my job. There is nothing better for me than seeing a kid excited by how they’ve improved or what they’ve learned.”

“Helping others kindles happiness for yourself as well. I get a lot out of it for my own football because it’s practicing what you preach. I do a lot of research for coaching which only helps me improve my own game overall.” Libby shared her story as part of a video project for Volunteering Tasmania’s recent awareness campaign to encourage Tasmanians to re-engage with volunteer­ing or to start for the first time. Find out more: www.volunteer­ingtas.org.au. Images supplied (Solstice Digital).