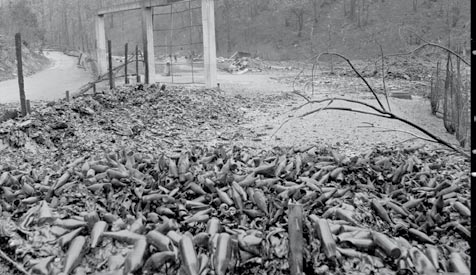 Devastating bushfires on mainland Australia strikes vivid memories to those of us who lived through the 1967 bushfires in Southern Tasmania when 62 lives and 1293 homes were lost.

So it was on February 7 1967, as a grade 3 student at Glenorchy Primary School, I witnessed a large wall of fire on the other side of Continental Road threatening the school and it wasn’t long before Principal Leo Fahey sent all the students home; surprisingly with no guarantee of a responsible adult to collect them as would be the protocol now.

Having arrived home and listening to emergency advice on the Astor transistor radio, it was abundantly obvious that this was no isolated incident.

My sister Lyn was a prefect at Cosgrove High School and was initially perplexed about the emerging panic. Lab technician Eddie Sauer was urging students to keep windows shut to minimise smoke intrusion. Students believing that their own homes might be in danger, were desperately seeking permission from Principal Jack Pullen to leave.

My brother Bob, a driver in the 47th Transport Company of the army reserve, at just 19, was called away from his job in the Motor Registry and was soon off in his Mark 3 truck to join the emergency effort. He was not seen or heard from for several days.

My father George probably had the best reason to think he had a quintessential guardian angel watching over him that day. As a transport inspector, he had been working in the Channel district near Snug, one of the most heavily affected towns. He recalled how a burning tree falling behind his car solved his dilemma to either keep driving or turn back. He recalled how the smoke was so thick, blocking forward visibility, that he had to open the car door and use the white dividing line as his only, rather rudimentary, navigation aid. 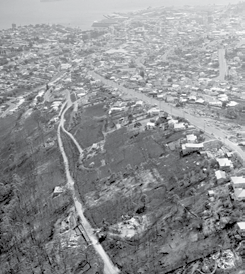 He made it back but as a sworn special police constable (as Transport Inspectors were those days), it wasn’t long before he and his peers were commandeered by the Police Commissioner to assist. His assignment was at Lower Sandy Bay preventing traffic travelling further south. Right up to his passing in 1982, he never forgot the experience of grown men, trying to get to their families, in such desperate emotional states; the likes of which he hadn’t seen since his time in the Pacific during WW2; or a simple bottle of soft drink placed on the road surface bubbling up and spilling over under the immense surface heat. 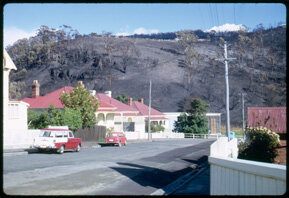 Although the aftermath was typified by so many shared confronting anecdotes of the horror, we have learned a lot from that experience. We have gone from a more reactively managed firefighting infrastructure consisting of many small brigades with sometimes incompatible equipment, to a very professional proactive fire management service, with heightened scientific understanding of fire risk which now enhances the formulation of appropriately thought out contingency plans. It is a credit to many career and volunteer firefighters, and indeed all members of our emergency services, who so often put their lives on the line in times of crisis. ■