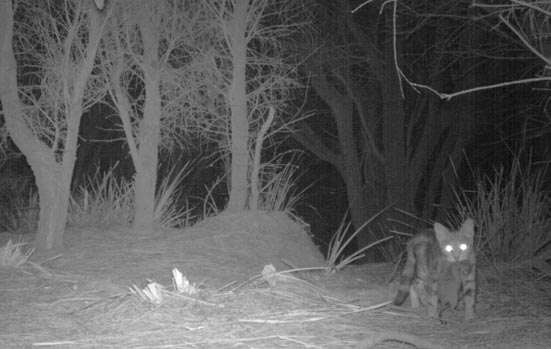 My 5-year-old son Maxwell recently declared that his favourite animals are “the dangerous ones, because apex predators help keep the ecosystem healthy.” While his definition lacks nuance, fundamentally he is correct.

Apex predators, the animals at the top of the food chain, play a key role in maintaining balance in the ecosystem. Recent work by Dr. Calum Cunningham, postdoctoral fellow at the University of Tasmania, demonstrates this basic principle of ecology.

Calum took advantage of “naturally occurring” differences in Tasmanian devil populations across the state. In the northeast, where devil facial tumour disease (DFTD) originated, devil populations have declined by as much as 95%, while populations are still healthy and robust in the north-west. Calum used motion-activated cameras to study the behaviour and abundance of both devils and other species.

“Up until 3-4000 years ago, Tasmanian devils roamed large areas of Australia.”

Calum’s findings support what every first year biology student is taught – healthy apex predator populations suppress midsized predators, which in turn allows smaller prey species to thrive. In areas with low devil populations, invasive feral cat numbers were 58% higher than in areas where devils were healthy. Simultaneously, animals like the native southern brown bandicoot fared much better in places where cat abundance was kept low. The suppression of cats may occur as a result of killing by devils, or the devils may simply be removing food resources like carrion before the cats can get to it.

Apex predators can affect not only population numbers, but also behaviour. In 2012, devils were introduced to Maria Island in order to establish a population free from DFTD. Calum found that the local possums, a natural prey for devils, became more risk-aware and spent less time foraging on the ground. Because possums are herbivores, this new behaviour may have implications for the regrowth of certain plant species.

The importance of apex predators cannot be overstated. Besides regulating the balance of animals and plants further down the food chain, devils also are very efficient at finding and removing dead animals, which could potentially limit the spread of disease to humans, livestock, and other wildlife. However, historically humans have not been particularly tolerant of “dangerous animals.” Most of mainland Australia is sadly lacking in apex predators. Up until 3-4000 years ago, Tasmanian devils roamed large areas of Australia. When they went extinct, the new top dog (pun intended) was the dingo, thought to have been brought to Australia from Sulawesi by sea nomads. However, present-day humans are often in conflict with dingos. Policies of lethal control have resulted in an imbalanced ecosystem, sometimes with attendant population explosions of feral cats, foxes, and kangaroos.

Calum is one of a growing number of scientists suggesting a cautious and heavily controlled re-introduction of devils to the mainland. Feral cats and foxes pose a huge threat to native wildlife, and attempts to control their numbers have been largely unsuccessful. If Calum’s research in Tasmania holds true on the mainland, a re-introduction of devils could be a game changer in the fight against feral cats.

Calum’s eyes light up as he says “Tasmania could become the leader in conserving Australian ecosystems. But the idea of reintroduction needs to be driven by the community.” It’s not an easy sell – there are uncertainties in how devils and foxes would interact, and whether there might be unintended consequences to populations of other wildlife species, but with small, fenced, tightly controlled experimental plots, the theory could be safely tested. How exciting it would be to see Tasmania at the forefront of a bold move to re-balance our fragile ecosystem. I know Maxwell would be in favour! ■ 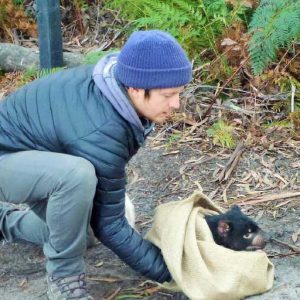 With the massive declines from DFTD, it’s critical to reduce risks to the remaining devils. Reduce driving speeds between dusk to dawn. Remove roadkill from the side of the road if it’s safe to do so.