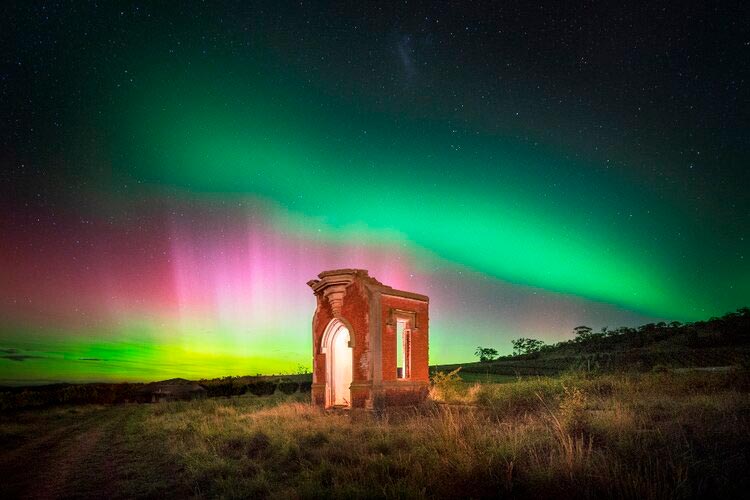 Once you’ve experienced your first Aurora Australis sighting, you’ll be forever chasing the next one. That’s the promise from devoted ‘Aurora Chaser’ and Hobart photographer Luke Tscharke.

“There’s nothing like it, it’s an incredibly exciting experience. It’s such an exhilarating phenomenon that once you’ve seen it, you’ll always be wanting more.”

Winter is the best time to see the Aurora – or Southern Lights – because it’s darker for longer. Auroras occur when the upper atmosphere is hit by energetic charged particles, principally electrons from solar wind, which travel along Earth’s magnetic field lines. Given the earth’s magnetic field is closest to the surface at the North and South poles, Tasmania and Antarctica are the best spots to witness the Aurora Australis.

To the eye the aurora will appear mostly as white light with faint colour but through a camera’s sensors the aurora may appear a vibrant green, red or purple. Luke says he stayed awake all night to photograph the Bruny Island lighthouse under the spectacle of the aurora. And the FOMO was real. “Fear Of Missing Out is intense because you can’t leave the spot – at 2am it might get even better. It can be nerve-wracking, you feel so determined to get the shot – you have to stay all night.”

The best spots to capture the aurora offer a clear view of the horizon and the least amount of light pollution. Goats Bluff at South Arm is Luke’s favourite destination but he says if the conditions are good he’ll head straight to Kingston Beach. “That’s the thrill in Tasmania, you’re so close to the action, you can be at the beach setting up your camera ready to go quickly. “You won’t be alone though, if the aurora forecast is good and it’s been hyped up a bit on social media you’ll find car parks at the beach will be full of Aurora Chasers.” ■

BEST SPOTS TO SEE THE LIGHT