For Nine Years Kingston Was the Epicentre of Tassie Bus-Building

Grant Wise knows more about the Ansair Kingston bus factory in Kingston than most people – he completed a vehicle body building apprenticeship, and worked there for all the years it was open. Here’s his story.

The Ansair Kingston bus factory existed for just a short while but the buses built at the facility have stood the test of time.

Although the seven examples remaining in Metro Tasmania service will be retired in the next few months and replaced by new low floor city buses which are also built in Tasmania, they are a favourite of many Metro drivers.

The possibility of a bus factory in Tasmania was first discussed as early as 1984 with planning well underway the following year.

The Robin Gray Liberal State Government (1982-1989) were determined to get things moving in Tasmania and soon announced that the Tasmanian Development Authority (TDA) was talking with well known Melbourne-based bus builder Ansair Tullamarine.

In 1986 construction started on a substantial building in the then-brand-new Huntingfield Industrial Estate south of Kingston and following much thought the new company was to be called Ansair Kingston.

A number of Ansair Tullamarine leading hands were sent to Tasmania to train the new workers and by July 1987 the first bus, a Mercedes Benz, was handed over to Metro Tasmania and driven out the factory door by a very proud Premier Gray.

They had locally manufactured bodies built on top of Mercedes-Benz, MAN and Scania chassis.

The factory completed all Metro Tasmania contracts and unfortunately closed its doors in October 1995.

Since then Metro purchased new buses from the mainland until 2018 when Elphinstone Engineering in Wynyard was contracted to build 99 new Bustech City buses for Metro. 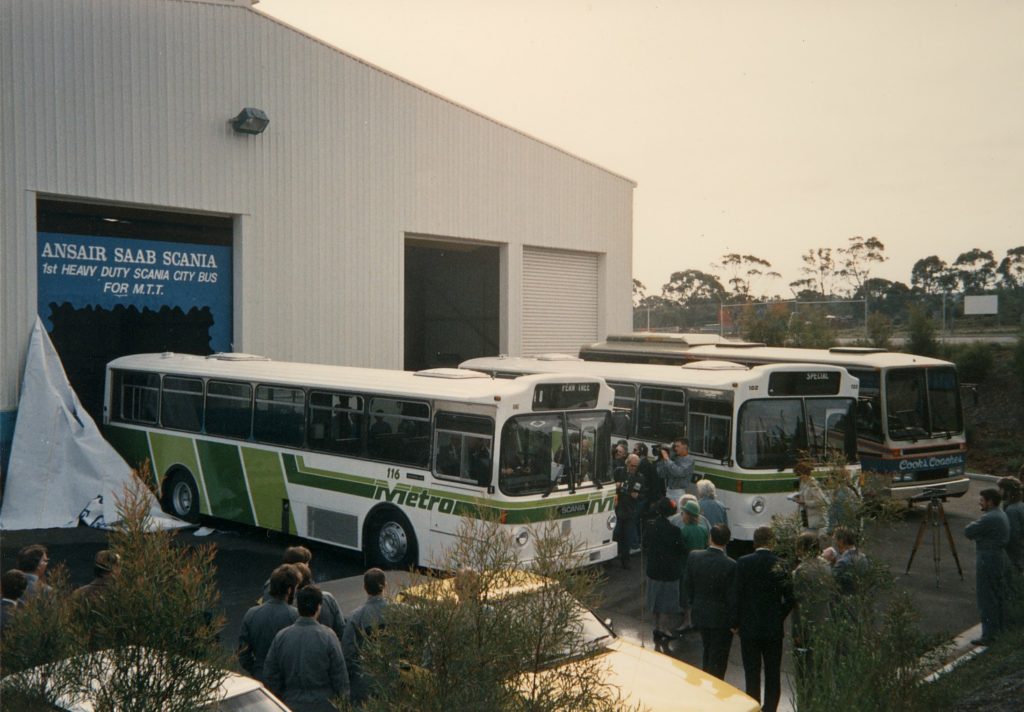 Examples of these buses are now in service in Burnie, Launceston and Hobart.

Tasmanian passengers can now once again travel on a locally built city bus and it’s hoped that possible future zero-emission
battery or hydrogen-powered city buses could also be built in Tasmania.

If you spot a Metro Tasmania Bus with a three-digit number that starts with a six, it was built at Ansair Kingston.