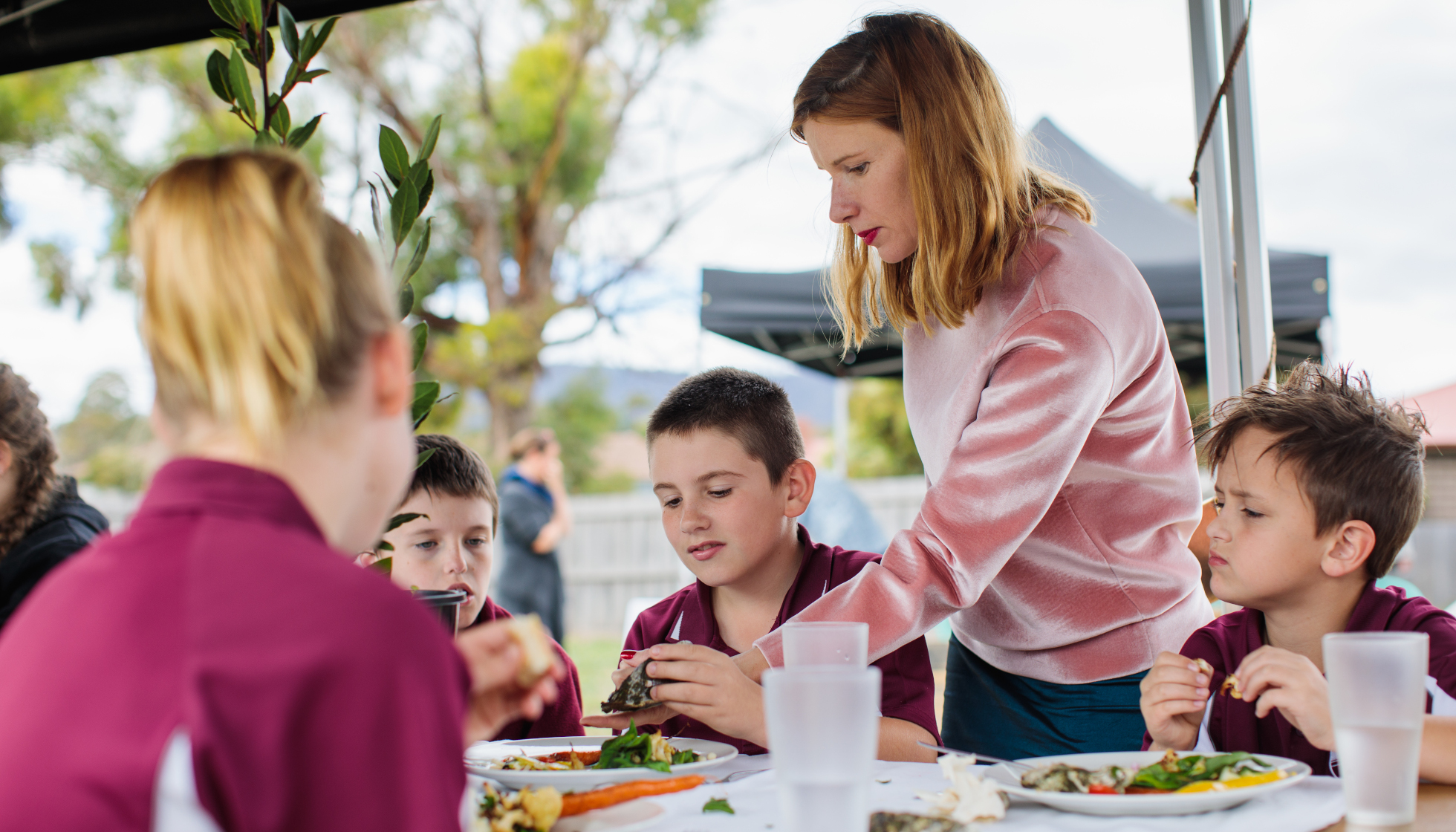 In November’s magazine we reported on the new MONA x Brighton Council x Centacare community development at Cris Fitzpatrick Park in Gagebrook. We’ve since spoken to the ever-effervescent Kirsha Kaechele, 24 Carrot Gardens project founder and leader of Mona’s community projects, about what it means for Mona’s place in the northern suburbs.

Tell us about this new project!

We found a space in 2018, two abandoned lots in lower Gagebrook. The houses had been burned down and not much was happening. So I asked the neighbours if they’d mind us building a garden and running some workshops for kids. They were all very welcoming and we named the project Bond Place (it’s in the Bond Place cul-de-sac).

One of the groundsmen at Mona happens to live nearby and he told us we’d picked the worst possible location as it was adjacent to the neighbourhood drug dealers. It was definitely a rough and tumble scene, a house full of mainly teenagers, but they were friendly and their kids quickly became part of the project. Shortly after the head of the house took a job at Mona. This all became an asset, as we were ‘protected’. It’s always good to have the right friends.

That house has since burned down. Things seem to burn down (a church and community centre and plenty of cars—the latter affectionately referred to as a Gagebrook birthday cake).

But we’ve had only positive experiences. This could be luck. Or strategy. On the day we completed our first structure there, a shade trellis designed by the University of Tasmania, we put blowtorches in the neighbourhood boys’ hands and asked them to burn the wood, a traditional Japanese architectural technique that results in a beautiful charred finish. It is exciting, but pain­fully time consuming, and I think by the end they’d had their fill of burning. 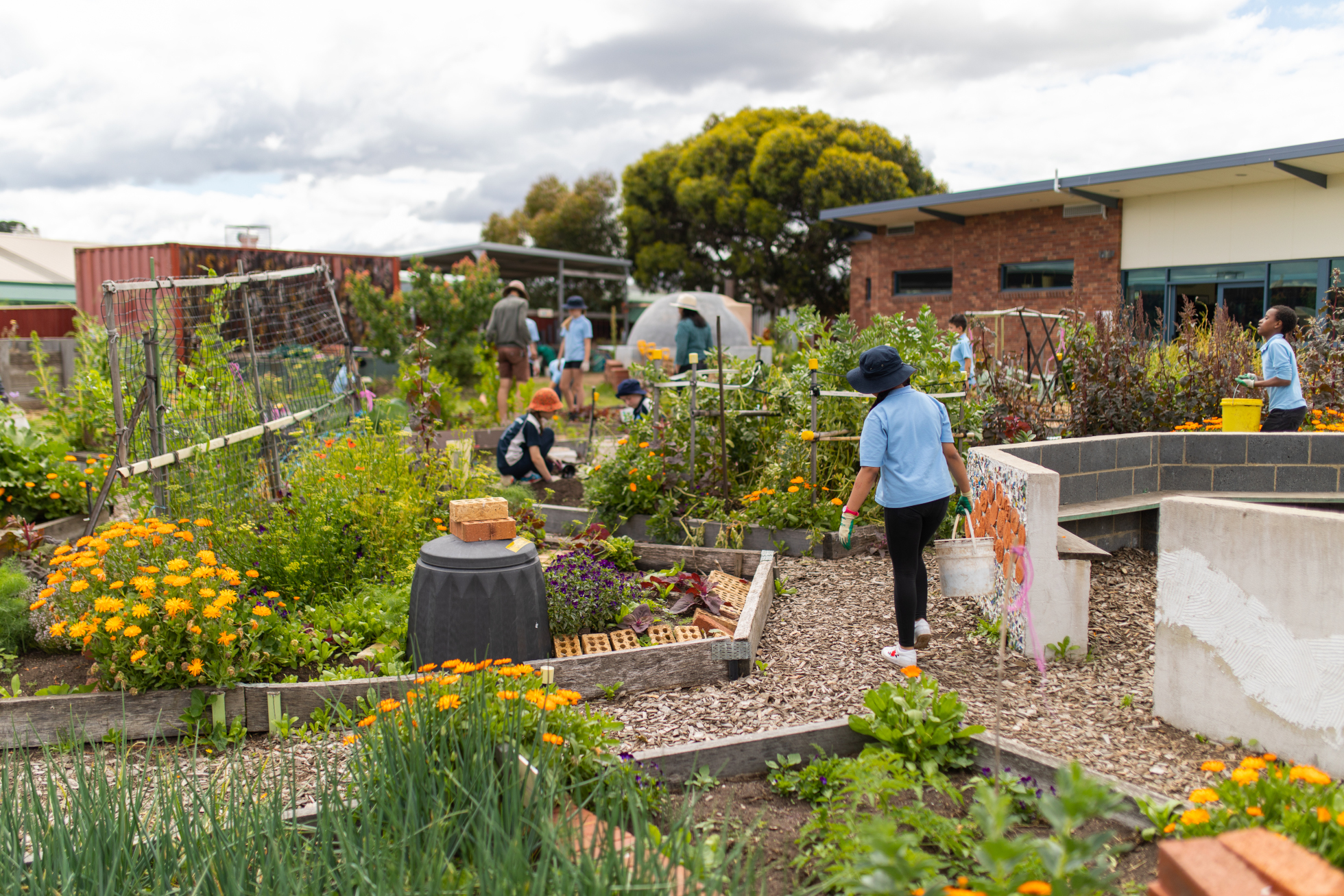 Or it could be relationships. Shortly after opening a cohort of amazing and strong women, leaders in their community, began to attend. One of these women is now on our not-for-profit board and three others, who live in Gagebrook, now work for Mona and are helping to run the project. So many beautiful children come through.

We open once a fortnight, and sometimes weekly, hosting kids from the local primary schools for workshops in the garden, planting and harvesting, cooking and sharing meals, and making art, including ceramics (a collection of the ceramic work made over the last few years have been exhibited at Design Tasmania). After school, the community comes in to partake and enjoy.

At the moment we have to put tents and tables and chairs and cooking equipment out every time we run a workshop. This new structure will change our lives and free up our team to focus on the good things. It is a beautifully designed space with rammed earth walls, an uplifting environment for this work.

How does Mona see itself as part of the northern suburbs of Hobart?

One need only look at the stats or better, take a drive to see that there has been a greatly uneven dealing of wealth, health, infra­structure, education and opportunity in the northern suburbs. Mona is in the northern suburbs and my husband [David Walsh] came from them. He grew up in public housing in Chigwell and Glenorchy. We believe every child deserves the same chance in life so we do our best (a tiny bit in the big picture) to even out the playing field.

Is there much interaction between the local commu­nity and Mona?

We have a beautiful relationship with the locals we work with in the community and are committed to seeing it continue to grow. 24 Carrot runs in ten schools in the northern suburbs and now one highschool, in Bridgewater, where we’re piloting our new highschool program. I personally teach a group of 12 and 13 year olds (which, let’s just say, is never dull). I am very excited to have the social enterprises up and running so we can channel the genuine interest, dedication and talent I see in the students into meaningful and inspiring opportunities. There is an enormous amount of talent that only needs a channel for expression and success. These kids will work in our upcoming social enterprises.

What else do you have planned in this area?

In addition to Bond Place we have the 24 Carrot HQ in Bridgewater, a large site near the river where we run workshops and build social enterprises where we can employ locals from the community.

We are currently building a beauty lab on this site with the support of Sanctum Medical. In this lab young people will make their own beauty products which we will sell through Mona and on site. We will also have a cafe to compliment our kitchen garden, and a ceramics workshop which will produce items for sale at Mona and beyond. We’re going big. The idea is to create as many jobs as possible through inspiring, creative, sustainable and healthy work, a place where young people can thrive and realise their potential in a beautiful setting.