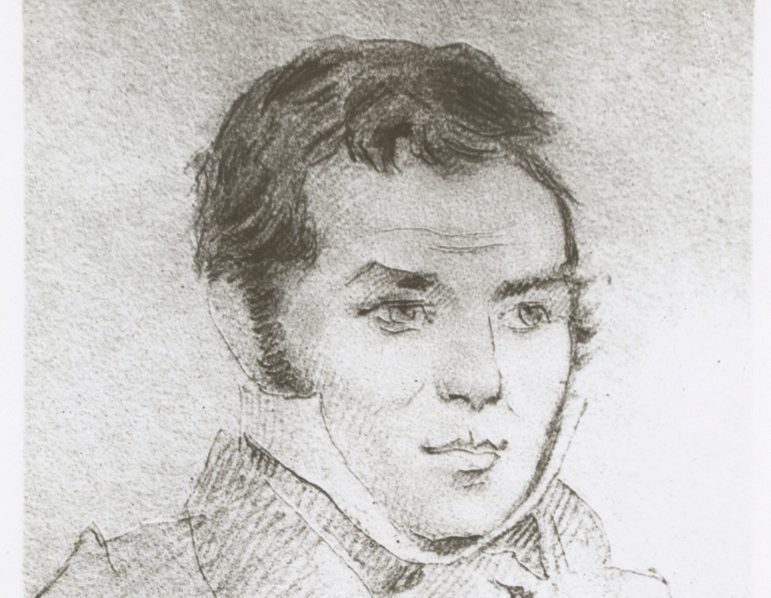 Matthew Brady, often called ‘Gentleman Brady’ was notorious throughout Van Diemen’s Land for his pluck and daring, as well as his fine manners and strong moral code. Brady was a groomsman in Manchester, England, with a great talent for handling horses before he was sentenced to seven years’ transportation for the crime of stealing a basket of food from his employers – some butter, sugar, rice and a flitch of bacon, which he had shared out amongst several young ladies of his acquaintance.

As a convict Brady was rebellious and attempted escape often. He received over 350 lashes for various offences and eventually found himself sent to Sarah Island, an incredibly harsh and isolated prison settlement located off the Western Coast of Tasmania. Sarah Island was a place for repeat offenders and escapees but instead of breaking Brady’s spirit it was here that he finally successfully escaped in 1824, leading 13 other convicts in stealing a whaling boat and sailing to freedom down the Derwent River.

He then commenced his bushranging career as Gentleman Brady. Though he and his gang robbed various homesteads and villages around Tasmania, he became quite popular amongst the common people. It was said he never used violence except in self-defence and he always acted in a polite and courtly manner towards his victims. He was especially chivalrous towards women, claiming to have never robbed any woman and refusing to let any of his gang insult, endanger or otherwise disrespect a woman.

Apparently when one of his men threatened a settler’s wife with sexual violence, Brady shot him in the hand, then had him flogged and expelled from his gang. The women of Tasmania went wild for his far-flung futurist ideals of ‘basic human decency.’ One of his most daring feats was the capture of Sorell. Brady and his gang took over the township, overpowering and imprisoning its garrison and releasing all the convicts, whom they then led in raucous celebration.

As a response to this, as well as Brady’s mounting power and popularity, Governor George Arthur placed a huge price on Brady’s head. In response, Brady cheekily placed his own reward out for the capture of Governor Arthur – including in the bounty, 20 gallons of rum.

Eventually, the reward for Brady became so high that he was betrayed by inside members of his gang. After several traps that he managed to escape and one disastrous attempt to flee to the mainland, Brady was injured, captured and sentenced to death.

He pled guilty to the crimes he had committed and faced his death with equanimity. There were loud outcries of protest from the people, and multiple petitions delivered to the government pleading for clemency, all unsuccessful. He received constant visitors, many ladies but also soldiers he had fought against coming to pay their respects. His cell was swamped with gifts, flowers, love letters, freshly made cakes and fine wines.

His only complaint was that he was to be hung alongside Thomas Jeffries, who in addition to being a mass-murdering cannibal, was also a police informant and therefore a snitch. Brady was hanged on 4 May, 1826 at the age of 27. The Sydney Morning Herald reported his death, saying:

There was a hush, broken only by stifled sobs, as the bushranger knelt to receive the last consolations of his faith. Then, standing erect, he bade adieu to the multitude and died more like a martyr than a convicted felon.

Brady’s Lookout, a popular picnic destination in the Tamar Valley, is named for him and was one of his many hideouts. You can sit there, look over the river and imagine what it must have been like to be a bushranger and man on the run.