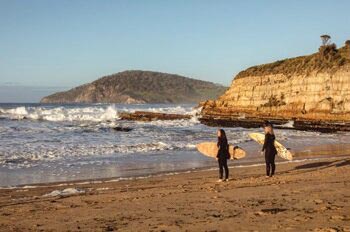 GET YOUR CANS OUT

Perth comedian, Sean Conway is bringing his Canned Comedy concept to Hobart and teaming up with Tasmanian comedian Andrew Greeley for the first Fringe at the End of the World Festival. Their show Rabble Rousers, on January 4, will just cost patrons a can of food which will help support Foodbank Tasmania.

The Nightingale, shot in the Derwent Valley, has been selected for the Sundance Film Festival in 2019. The drama tells the story of a woman and an Aboriginal tracker in Tasmania in the 1820s and stars Aisling Franciosi, and Baykali Ganambarr.

Did you know the Hobart City Council runs a fabulous program, Still Gardening, to give older people a chance to stay active in their homes and gardens. Volunteers, or Garden Mates, work with an older person for one or two hours a week in their garden helping them with jobs like weeding, pruning and lifting heavy weights.

The full North South MTB track, which was damaged in the May 2018 storms has reopened. Repairs to the New Town Rivulet crossing on the North-South Track have been completed and it is now open for its whole route from The Springs to Tolosa Park.

Love running almost naked? Want to raise money for The Children’s Tumour Foundation of Australia? On Sunday 17 February get your butt down to the Lower Sandy Bay Foreshore near the Sandy Bay Sailing Club for the annual Cupid’s Undie Run – a 1.5 kilometre dash in your finest. If you #Dare2Bare, it’s $70 which includes some Calvin Klein undies, a t-shirt and some fun pre and post event entertainment.

Three species of rare Tasmanian handfish are at risk of extinction, one species is down to a population of only 70. Only found here, they’re at risk from climate change and other invasive species. You can help with a donation via handfish.org.au