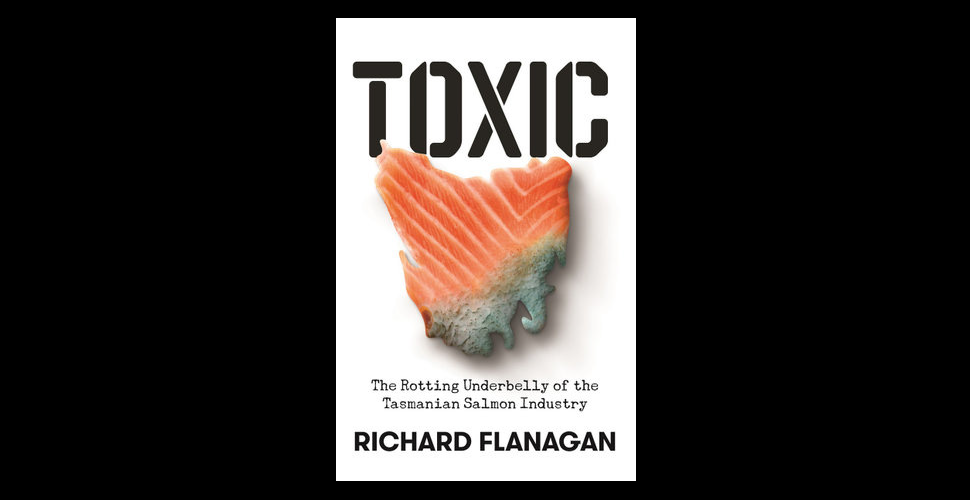 He’s angry and he’s sad, and that anger and sadness emanates from every single page of his latest release, Toxic: The Rot­ting Underbelly of the Tasmanian Salmon Industry.

Written quickly (his previous novel only came out in September), Toxic is a passionate call to arms for citizens to fight back against a litany of abuses Flanagan says the salmon farming corporations have inflicted upon not just the marine ecosystems of Tasmania but also against locals, the larger environment and villag­es half way across the world. And then there’s the fish.

The Tasmanian farmed salmon industry is worth approximately $796 million (more than our dairy and beef industries combined) and has grown exponentially over the past three decades. Over that time Flanagan has watched the “slow destruction” of the waters near his Bruny Island property. The pristine water turned murky, fish and plant species disappeared and a sliminess and algal growth visibly increased. “I thought I would write some­thing about this, just a short article, and then I started talking to scientists, to peo­ple in other communities and I discovered one story of horror after another, after another,” he recently told the ABC. “I realised that Tasmanian Atlantic salmon is just one big lie. It’s not clean, it’s not green and it’s not even healthy.”

The result is this small but mighty book, overflowing with facts and case studies from all over the world but concentrating on the work of industry behemoth Tassal, and to a lesser extent Huon Aquaculture and Petuna. Despite the heavy statistics it remains a readable and at times even graceful book. And yes, it will definitely put you off your salmon dinner. There are stories of near-ruined ecosystems from Hobart to the west coast, where, Flanagan writes, “the sludge pouring out of the floating feedlots in the form of fish faeces, uneaten food and urea can destroy marine ecosystems by overloading them with excess nutrients”.

Alarmingly, there is Hobart’s compro­mised drinking water supply: “it should be self-evident that using Hobart’s drinking water catchments as — in the words of one scientist with extensive experience working with the aquaculture industry — sewage settling ponds for salmon hatcheries is not just wrong but profoundly dangerous,” he said. Flanagan covers animal cruelty in gruesome detail. “Fish farms are falsely named. In reality, they are gigantic floating feedlots,” he summarises. “Even that image is inade­quate to convey the cruelty.” He describes intelligent creatures who have worn off their fins on one side after swimming in one direction en masse for so long, and who are chromosomally altered to grow fatter, faster. Then there are the mass fish deaths (1.35 million salmon died in their pens in Macquarie Harbour 2017, and an as yet unconfirmed number died at Okehampton bay last December).

Flanagan describes the dyeing process used to make the salmon look like…well… salmon. The whole process sounds far too much like taking a trip to Mitre 10 to choose a paint colour for the house – there is even a colour wheel from which to choose the most salmony salmon tone. There is the intense use of antibiotics, and the carcinogenic additive (invented as a pesticide by Monsanto) used to stabilise the oily fishmeal as it is transported across the world to the Tassie feedlots. This additive – ethoxyquin – is not permitted for human consumption, but it is allowed to be eaten by the fish we consume.

Flanagan shares stories of corruption, of the opinions of intelligent and experi­enced experts being ignored by regulato­ry panels, and of local councils going into debt to pay for water infrastructure for salmon companies.

Understandably, the industry has pushed back against Toxic. A spokesperson for the Tasmanian Salmonid Growers Asso­ciation, representing the three companies, said Tasmanians should be proud of the “strong, highly regulated, longstanding” industry, and that Flanagan’s claims would be “deeply felt by the more than 2,000 people we directly employ and their families, as well as thousands of contractors”.

“I’m sorry (he) felt upset when his beach house views were disturbed by work­ers doing something productive for the Tasmanian economy, their families and regional communities,” an Australian Workers Union spokesman said.

The industry hopes to double in size by 2030. The areas slated for expansion have not yet been made public. Flanagan argues that the salmon farms should be moved out of the coastal waters altogether and into land-based tanks, something he says the international salmon industry is already looking at.

I couldn’t put this down. I read it late at night, gasping at each new revela­tion. And I’m not the only one – Fullers announced that in 101 years of trading, they’d never had a book sell so many copies so quickly. Within two days the book had become their #1 bestseller for the year. It is resonating with readers be­cause it is a neat and tidy snapshot of an enormous industry where, like in so many cases, it seems corporations come first, government comes second and people and places come a hard last.