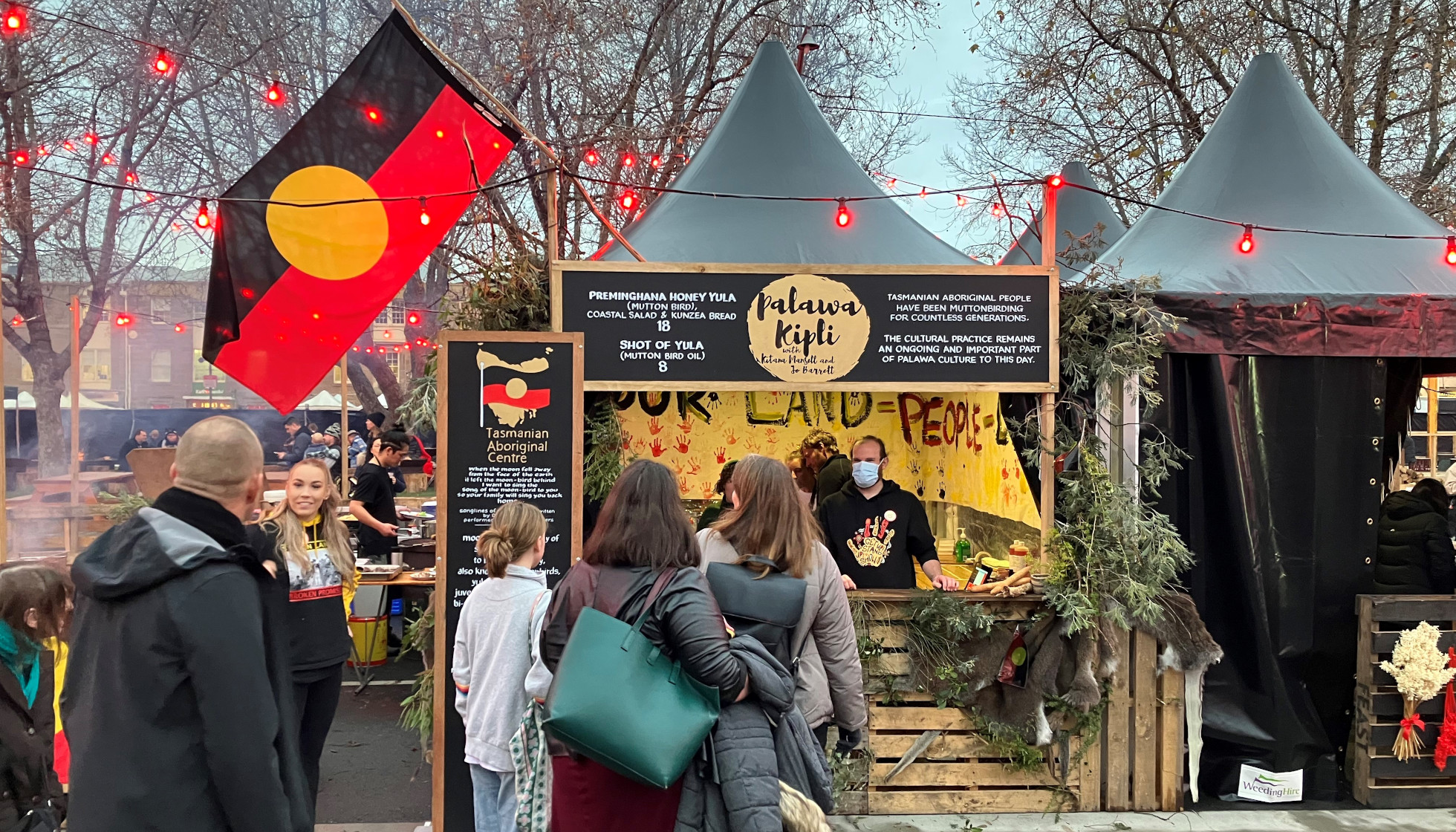 At the palawa kipli food stall, Project Manager Kitana Mansell collaborated with guest chef Jo Barrett to provide a tasty feast, cooked over the fire with tra­ditional techniques: muttonbird (“yula”) from Tasmania’s titima/Trefoil Island, cooked with Preminghana honey also from the northwest, and accompanied by a crisp coastal salad and some delicious kunzea bread. Shots of muttonbird oil (rich in Omega-3 fatty acids and tradition­ally used as a superfood to foster good health throughout long, hard winters) were also on offer.

This is in line with palawa kipli’s stated aim on its website, to “share our history and bring people together to enjoy our modern take on our traditional foods”. Its vision statement: “To go back to our palawa origins, to live and provide delicious sustainable Aboriginal inspired food to the masses. The food will inspire thought on the traditional and modern ways of living sustainably and ultimately make the word a better place.” kipli is the word for food in the Tasmanian palawa kani language.

I found the honey-prepared bird very tasty – tender and smoky, not too oily with just a hint of the fishy taste I’d been told about, and more meaty than I’d anticipated. 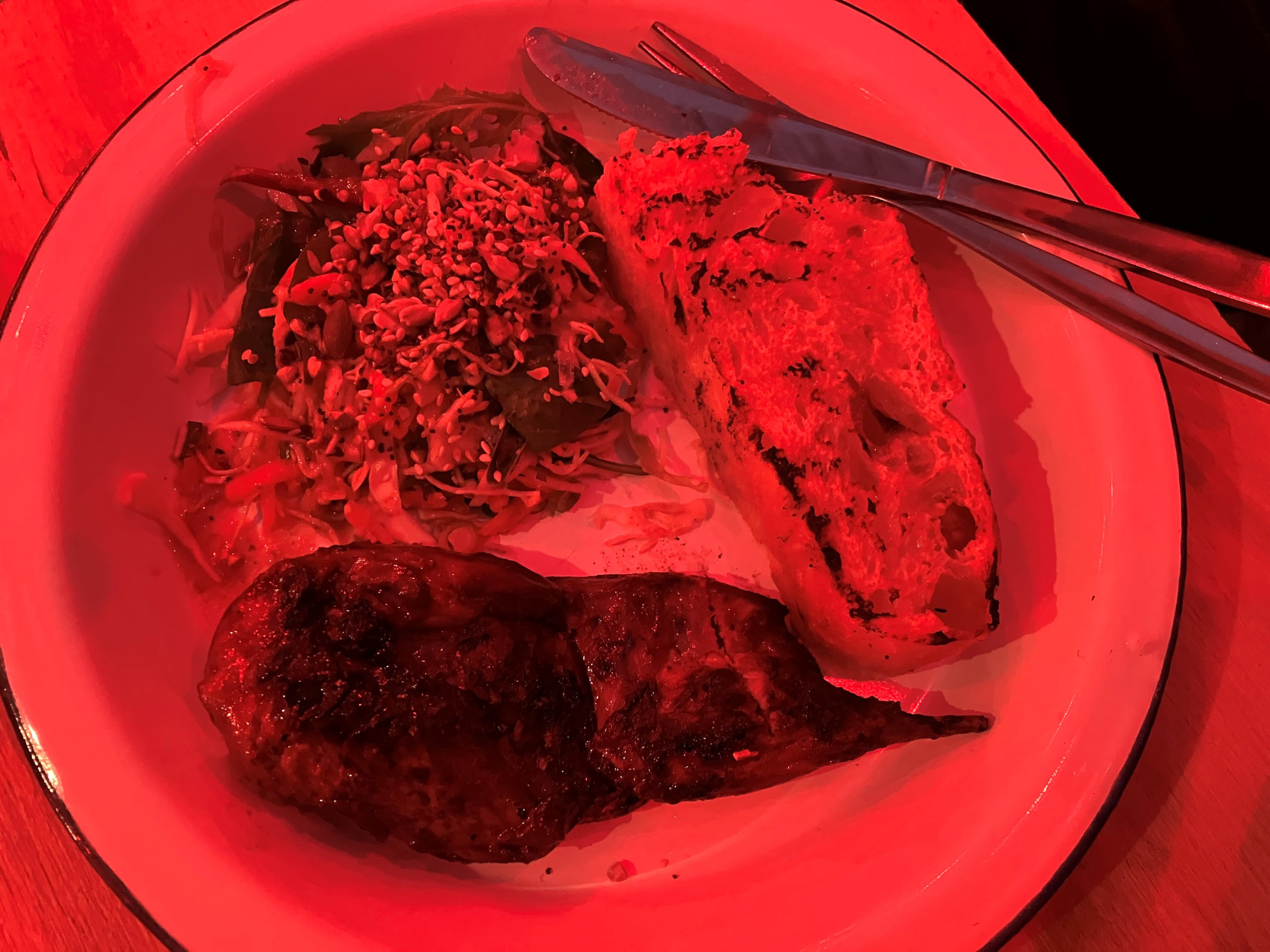 The muttonbird, a member of the Procellaridae petrel family of seabirds, is a migratory bird and powerful oceanic flier, and breeds in burrows. It is also known as moonbird, yula or yolla, or officially as the Short-tailed Shearwater (Ardenna tenuirostris, formerly Puffinus tenuirostris). There is a long tradition of muttonbirding within the Tasmanian Aboriginal community. Commercial birding, particularly common in the Furneaux Islands, started with the Aboriginal tyereelore clanswomen in the 1800s, harvesting for feathers.

The first canning plant for muttonbirds on Flinders Island was set up at Lady Barron by James Irvine in 1914, as an alterna­tive to salting the birds. On a visit to the Furneaux Museum on Flinders Island almost two years ago, I bought a colourful printed label from the 1930s for canned muttonbird, or “Game Squab in Jelly”.

This label is from the British Australian Canning Company Pty. Ltd. at Lady Barron. An article in The Examiner of 29 January, 1933 tells us that “the company had its being in a small syndicate of Launceston business men, formed two years ago with the idea of canning mutton birds, crayfish, and such other fish as trumpeter, garfish, bream, sea trout and others … In the first year of its operations the company canned 20,000 mutton birds and found a ready market for the product on the mainland. Orders have been received also from Singapore and Colombo …” However, by 12 June, 1936 there was a notice in The Examiner announcing the “Voluntary Liquidation” of the company.

The cans contained “8 to 12 Weeks Old Game Squabs Cooked & Ready for Use”. If you wanted the contents hot, you were advised to place the can in hot water for ten minutes before opening! The label also advises using the birds in “delicious pies and fricassee, also as a mayonnaise”.

An important part of Tasmanian Aboriginal culture, the harvesting of muttonbirds continues within declared season limits, although freezing is more commonly used now to preserve birds for commercial sale. Locals recall that the birds were readily available from most butchers throughout the 1950s and 1960s, and recipes for using fresh and salted muttonbird in a variety of ways have appeared in local cookbooks over the years. Cooked birds were also available in the past as takeaways from Tasmanian fish and chip shops.

Me, I’m just grateful that my first taste of this iconic seabird was the lovingly-pre­pared dish from palawa kipli at this year’s memorable Winter Feast.