Things to do in Hobart This Month 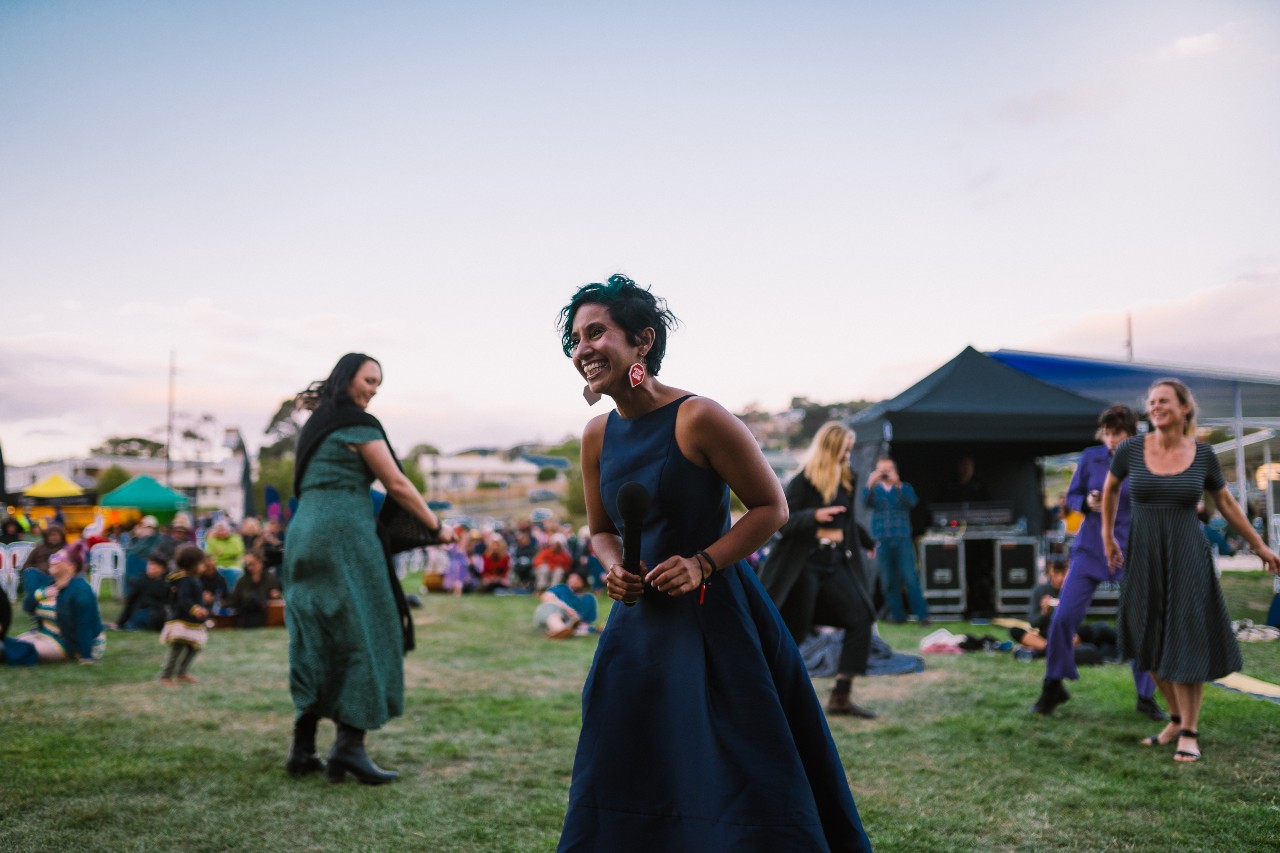 Have your cake and eat it too!

After their event in Launceston earlier this year, you can now drink for a good cause at Variety of Gins at the Royal Tasmanian Botanical Gardens (Friday 5 March). “Are those scollops Tasmanian?” The Dover Seafest is on from 11am – 4pm. Because of COVID, you’ll need to book a ticket! (Sunday 14 March). Established in 2017, Blue, Brews and BBQs at Hobart Brewing Co. boats blues musicians paired with a great selection of locally brewed beers and delicious barbecue fare (Saturday 27 March).

Cultural events that aren’t a movie…

Paint me like one of your French girls. Simple Cider is offering a life drawing workshop, complete with nibbles for $20 (Wednesday 3 March).  Spook yourself out at Tahune Airwalk’s Dark Cave Sky Light performance where a multi-voiced performative reading of Dark Cave is interwoven with viola, cello and voice (Saturday 6 March). RuPaul’s Drag Race got you gagging for some local drag? Throw on some heels and head to Drag Queen Bingo at Society Salamanca (Thursday 4 March).

Are your memoirs just waiting to be written or got a killer idea for a crime novel? Kingston Writers’ Space meets and the library tonight if you need a little inspiration (Tuesday 9 March). The only puppet to be a permanent fixture on the international stand-up circuit, Randy will get you ready to laugh with his show The Clubhouse at Hobart Brewing Co. (Thursday 11 March).

Key art exhibition Liberty opens at TMAG showcasing local, interstate and international artists’ interpretation of the challenging notions of agency and representations, surveillance and exile (Friday 12 March). After his critically acclaimed tour was cancelled last year due to COVID, Tom Gleeson will be at the Theatre Royal for his Lighten Up tour (Saturday 13 March).

Get some culture in ya with two-time ARIA-winning singer-songwriter Monique Brumby and the TSO performing at the Odeon Theatre (Friday 19 March). They’re here, they’re queer and they’re not on the mainland!

Head to TMAG for a night of live drag shows, roving performers at 10 Gays on the Island and live your fantasy, yasss (Saturday 20 March). Get behind the (pottery) wheel and learn to make your own jugs and cups at Leap and Wander Studio (Saturday 21 March). It’s a long way to shop if you want a sausage roll! Pub rock group Choirboys are performing their Feels Good show at the Longley Hotel (Saturday 21 March).

While can’t go to Broadway right now, Broadway’s coming to Hobart when the best of musical theatre will be on show at the Theatre Royal’s World of Music event (Monday 29 March). Get your weekly dose of laughs from some of Hobat’s best comedians at Jokers Comedy Club at the Polish Corner at 7.30pm (Wednesday 31 March).

You gotta pump it up

Dance like no-one’s watching at No Lights No Lycra Hobart – it’s a chance to dance and express yourself without worrying about anyone judging your moves (Monday 1 March) Are you still looking for a new-year hobby? Take your yoga practice to the next level with The Fourth Floor’s acro-yoga beginners classes (Tuesday 2 March).

If you’re wanting to ditch the car and take a more active commute, Kingborough Community Hub is running a beginner bike maintenance workshop for Bike Week (Wednesday 10 March). Get some huffy puffy with Fitness in the Park at Bellerive Beach, Clarence Council’s free fitness program for the whole community (Tuesday 16 March).

Not a fan of the gym? Take a Japanese Sword Classes at BujinkanTasmania Budo Dojo (Thursday 18 March). How’s your stroke and roll techniques? Paddling, Pals and Pizza is on at Sand Bay for those wanting to give kayaking a crack (Monday 22 March). Let your inner Shania Twain out with beginner line dancing classes at Claremont War Memorial (Tuesday 23 March).

For even more events, check out the calendar in our latest issue.

Looking through the lens at Spring Bay Mill
How To Identify Useful Local Weeds
Will a Limit on Car Parking Boost CBD Fortunes?
For Nine Years Kingston Was the Epicentre of Tassie Bus-Building

Escape To The Country

Pet the animals, walk in the wilderness, pick your own berries and enjoy colonial accommodation... Farmstays and day tours are popping up across the state, providing a fun weekend away for visitors and Hobartians keen to get their gumboots dirty. Here are four farms to visit this Spring.

The Blue Mountains and surrounding areas suffered greatly during recent bushfires but slowly the National Parks in New South Wales are reopening, with some ready to welcome visitors back.

Talk Sexy To Me …

If I asked you to think of a food item that makes you sexy, healthy, attractive, youthful and energetic I can almost guarantee that you didn’t think of gelatin.

The vacant stare in front of the open fridge or cupboard has afflicted us all on occasion. No matter how much food we have in store, there seems like nothing to eat. When you’re hungry and lacking cooking inspo, the ‘hangries’ can easily take hold.

Meet the Tasmanian designing a better life for us all. Hannah Moloney of Good Life Permaculture is a leading landscape designer and educator in South Hobart (you may have noticed her bright pink and green house up on the hill). She’s spent 15 years designing and managing projects around urban agriculture, small-scale farming and community development. She believes in ‘radical hope’ and facing the climate crisis in a proactive and positive way.

Kate Morris had an idea to sell cosmetics online at a time when it wasn’t done. She borrowed $12,000 from her boyfriend’s parents and set up an online store, Adore Beauty in the garage. Twenty years later, the business is thriving, enjoying annual revenue around $100m. Kate recently sold a chunk of the business to private equity investors, Quadrant.

What’s With The Weather?

Even though Tasmania is known for its mild summers, it doesn’t take much to get sunburnt. Tasmania experiences extreme ultraviolet (UV) levels, but contrary to popular belief this isn’t due to the hole in the ozone layer, which is actually south of the continent.While higher UV levels often occur at the same time as higher temperatures, the two are not linked. Instead, UV levels are determined by the angle of the sun in the sky: the higher the sun, the higher the UV. In December and January, the position of the sun over Tasmania gives the state a UV index of 11 or more on most days, which is classified as “extreme” on the UV index. Tasmania’s lack of humidity and generally clear skies contribute to the stinging feeling of the sun. UV can reflect off buildings and water, making it possible to get a higher dose of UV from these reflected rays, even in the shade.

It was almost 2am and US singer Halsey had just finished her set and was being whisked off stage at Falls Festival and into her waiting Tesla.

On a site where only the outside walls remain, how do you help visitors contextualise what happened inside those walls? At the Cascades Female Factory site in South Hobart, actor Karissa Lane, together with director Craig Lane-Irons and writer Finegan Kruckemeyer have created The Proud & The Punished, a 45-minute monologue to share the horrifying, heart-warming and sad stories of the women and babies, who went through the site from 1828 until 1856. At any given time there were between 700 and 1200 prisoners.

Devastating bushfires on mainland Australia strikes vivid memories to those of us who lived through the 1967 bushfires in Southern Tasmania when 62 lives and 1293 homes were lost.
Magazine
AboutContributeAdvertiseNewsletter Sign UpContact

Find out the latest community news and ideas from around Hobart in December and January.

Find out the latest community news and ideas from around Hobart in November.

We’re surrounded by history in Hobart and now you can take a virtual trip through time to plant yourself in the 1820s. The brains behind the app is John Stephenson of Digital Heritage Studio.

There’s quite a bit of choice when it comes to Vietnamese food in Hobart, especially with the staple banh mi bread roll.