A Knitting Bushranger? The Dichotomy of Michael Howe 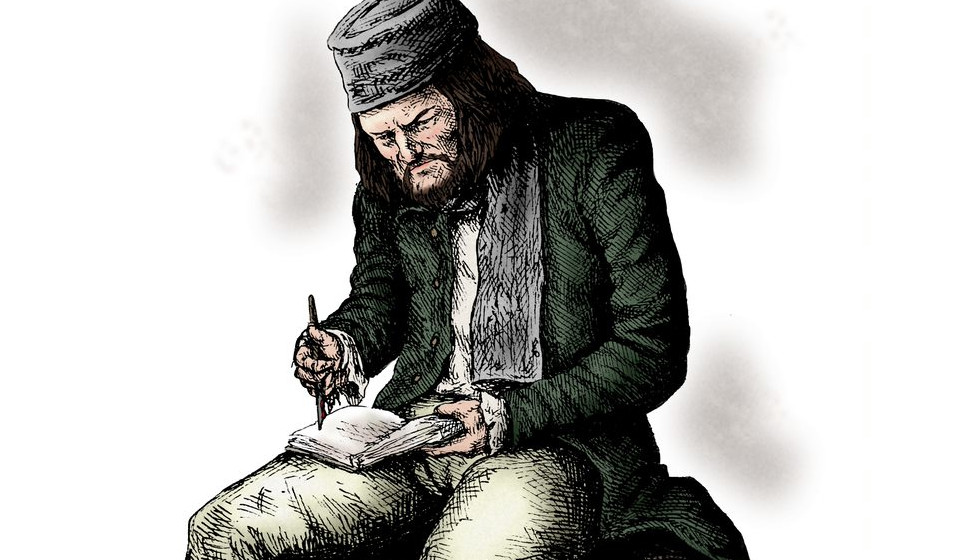 If you happened to have been walking along Murray Street in early 1817 you may have observed a rough sailor-looking fellow with a profusion of coarse hair sitting outside the gates of the old gaol, working with a pair of knitting needles to fashion wool into wearing apparel for sale.

This individual, with slightly pockmarked cheeks and deep-set eyes, was Yorkshireman Michael Howe, known to many as the worst of the Van Diemen’s Land bushrangers, or as he styled himself in a letter in 1817: “Governor of the Ranges”.

It is difficult to imagine a bushranger enjoying knitting, yet for Howe it was a favoured pastime while awaiting a pardon promised to him by Lieutenant-Governor Sorell. Howe’s proficiency with textiles would have undoubtedly been developed during his time in the British Navy, with it being vital for sailors to know how to repair the ships sails and nets as well as their clothes.

During his time in the bush, kangaroo skin was the material of choice. The methods of using sinews to stitch the leather were probably taught to him and his fellow “gentleman foresters” (as they referred to themselves during some of their early robberies) by the two Aboriginal women in the gang. This way Howe made moccasins, knapsacks, cloaks and even binding for a beloved gardening book after he had “so studied it as to have thumbed its covers off”, as described by celebrated Tasmanian surveyor James Erskine Calder in a series of articles published in the 1870s. In a journal Howe kept, he described the dreams he had of his little sister Mary and deceased gang members, and listed the vegetables, flowers and fruit trees he wished to plant around his home.

To many who will be acquainted with Howe through the many posthumous accounts in books and the feature film The Outlaw Michael Howe, these softer aspects of his character will be difficult to comprehend. In nearly all of these retellings the crimes and character of Howe have been twisted, with authors adding new victims or inventing crimes to attribute to him. Even in life the bushrangers could not escape unfair vilification, expressing in a letter to Lieutenant- Governor Davey on 30 November 1816 that they considered themselves to be “greatly injured by the country at large”, and witness statements were often at odds with what was printed within publications such as The Hobart Town Gazette.

While it has often been stated that Howe was never known to perform one humane act, there are many examples of humanity and even politeness all throughout his career. As James Calder noted in his articles, “Howe disliked unnecessary violence, and though he sometimes threatened it…he never would permit it except in self-defence, or when, according to his style of thinking, he believed his victims deserved it.”

A settler named Thomas Seals, who had been bailed up by Howe’s gang in 1816 reported, “if I would be a friend to them, they would reward me well…for they were fully determined to be like Turpin, to rob from the rich and give to the poor.”

Howe never received the pardon he was promised. It was believed that a messenger told him that the pardon had been rejected and he was to be promptly hanged, so Howe escaped to the bush. In October 1818 he was shot, bayoneted and bludgeoned to death after being lured to a hut by one of his associates. His head was cut off and brought back to Hobart, where it was displayed on a spike over the gate of the Murray Street gaol.