Welcome to The Shitshow 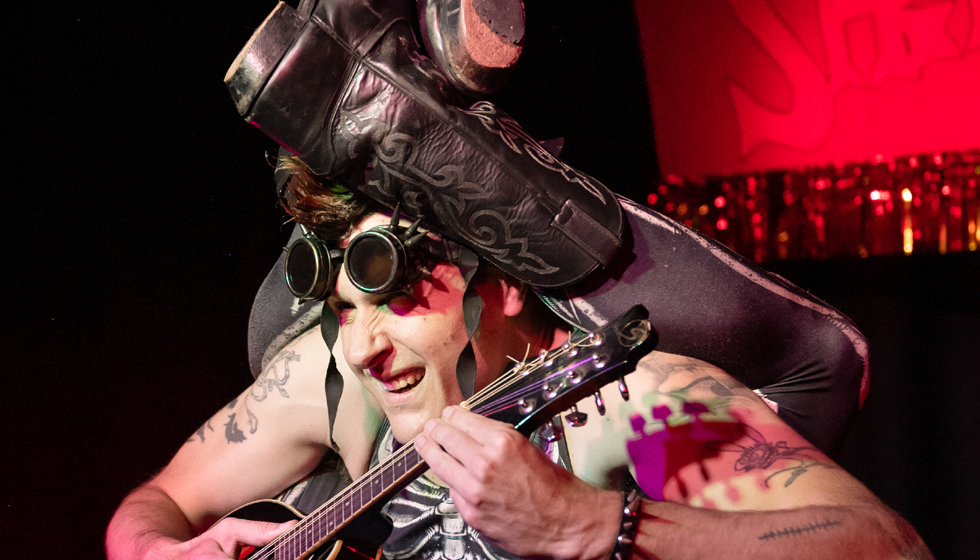 Sophie Ambler took matters into her own hands when COVID hit, eventually starting The Shitshow to help fellow performers get back on stage and make something of the horrible year.

Live performance and music has been hard hit by covid. What has changed for you and your work over the past year? Pre-Covid I hopped from festival to festival, mainly interstate and in Hobart. Now, the industry that relies on people physically coming together is far too unpredictable to rely on. I’ve been one of the lucky ones, landing a full-time gig at MONA. But I know that a lot of ex-work mates around the world are returning to study, stack shelves and/or move back in with their parents. (Bring on the existential crisis.)

How did The Shitshow come about? I’d been wanting to run a very slick and sexy cabaret for a few years now and was unsuccessful in funding it. Then when the events industry went down the gurgler I started to miss the absurd variety shows that I was always spoilt with interstate. I realised that it was my high ambitions (and previous nomadic lifestyle) that were getting in the way of making anything at all – and that for my first crack, it’s more than okay to be a little bit shit. In fact, let’s aim to be! So, The Shitshow was born.

What can audiences expect from a night at The Shitshow? I hear it’s “curated chaos”! Expect a crude drag queen as host, a house DJ with a creative licence, an under-qualified stage manager and acts both incredibly talented and non-talented. Also expect every dollar spent to support our artists! We don’t retain any profit, we just pay our artists more!

How do you find your performers? Flute beat-boxer was from my high school talent quest, Columbian folk dancer was from cha-cha classes and world record female deadlifter was from my old job. There are so many interesting, talented people in Tassie if you pay careful attention! For example, I found one of the world’s best jugglers, Joe Fisher, on a solo-getaway to Penguin – I just happened to be there the weekend of Mount Gnomon Farm’s Barn Door Cabaret. He had cut his contract in Vegas short to return safely to Australia and, like me and a lot of other performers and workers, was ‘grounded’ at home. (Yes, there are world-class circus performers grounded in Tassie!) If I hadn’t met Joe, The Shitshow wouldn’t exist.

What’s your background? Have you produced shows before? No, this is the first show I have produced and stage managed, which is pretty obvious once you see me try to set up a micro­phone. My background in festival work is mainly in administra­tion, operations and front of house – but I’ve tried anything from building venues in Adelaide to being a Christmas elf in Leicester Square.

Who would be your dream performer to have on the bill? Our next lineup actually has a couple of my dream acts! Firstly, Denis Lock, who sold-out shows on the West End as part of La Soirée and La Clique and now works happily as a farm hand on the North Coast. Secondly, award-winning Melbourne comedian, Josh Glanc. He is notoriously silly and will be performing his solo show the night after ours! But what I truly dream of is to have a real-life combat Jiu Jitsu fight in the middle of my cabaret show… stay tuned!

With two shows under your belt already, what has been the most rewarding part? Believing in talented people, especially the ones who have never performed on stage, and then witness­ing them blow the audience away!

What plans do you have for The Shitshow in the future? I hope that by inviting Tassie‘s micro-communities to the stage, The Shitshow will gift our town a deeper appreciation of the diversity and talent that we have. I make The Shitshow in Hobart, for Hobart, and it won’t leave the island. It won’t last forever either. In the meantime, I’m excited to see who comes out of the woodwork as it goes on!

Where can readers buy tix? No pre-sales! You can find them on the door (if you’re lucky).